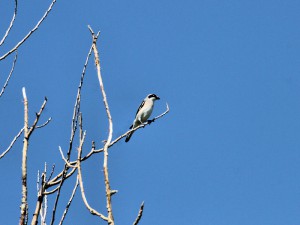 Our final day of the Zeiss Victory SF tour started on the bus at 4:30 am. We drove for over three hours to a site well south of Budapest, Hungary. The border stop provided us with our first good looks at Crested Larks. These attractive larks commonly inhabit the fields and roadside edges. There was little time to look at them though as we continued the long drive. Our first stop was a great one. We parked along a rural road just outside a tiny town. There we immediately found several Lesser Grey Shrikes. These birds look much like our Loggerhead Shrikes, except they are warmer grey tone in the back and crown. They also show a distinct pinkish wash (photo) to the belly and upper chest.

Also present there were a few European Rollers. These handsome birds are overall sky blue color, slightly darker than Bee-eaters with contrasting reddish-brown wings and back. Rollers are fairly large, being slightly bigger and rather stockier than a Western Scrub-Jay. They are named for their looping roller-coaster-like display flights, which we got to see briefly, sadly only at great distance. Also present at this site was a hunting Little Owl that kept popping up onto a distant fence post. A pair of lovely Stonechats flew about the margins of a rough field edge. 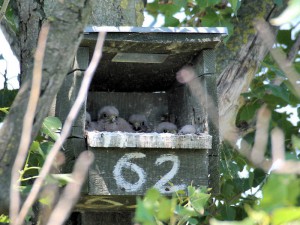 Red-footed Falcon chicks in a nest box in Hungary

Our next destination brought us to a large open grassland bordered by a swiftly flowing canal. We sought nesting Red-footed Falcons here. They nest in surprisingly dense colonies, using shelf-type nest boxes erected for their use. The falcons didn’t wait long to put in an appearance. A female circled high over our heads briefly, and then a male blew by at low altitude.  He flashed his steel grey-blue back, body and upper tail, showing the characteristic silvery upper wing appearance. The underwings are a grey and white checkerboard pattern, contrasting with a deeply rusty crissum and bright reddish orange feet.

Red-footed Falcons are slightly smaller than the common Kestrels but bigger than a Merlin. They are insect-specialists, particularly adept at catching dragonflies. Having seen several in flight, we tried for a closer approach to the active nest boxes. This action flushed our only Tawny Pipit of the trip!

A distant, circling pair of eagles eventually proved to be Short-toed Eagles, a bird no one expected from this trip. They finally circled a little closer, enough for a scope view to show the characteristic very pale underwings and body. We approached a tree with several nest boxes in it, and found these five fuzzy chicks in one of them. We could see the parents bringing food to other nest boxes in a distant copse of trees, and even hear the explosion of begging noises from their chicks. The parents of these birds seemed reluctant to come in and feed the chicks, so we backed off and returned to the bus. 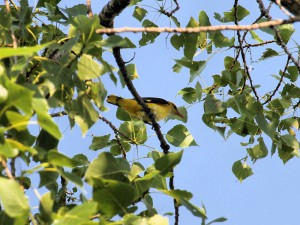 A female Golden Oriole near her nest

Our lunch stop was at a traditional Hungarian restaurant out in the middle of nowhere! They served a wonderful goulash, washed down with very cold lager. We greatly appreciated that on a day where temperatures exceeded 30°C! Dessert was a delicious fruit blintz – really spectacular food! After lunch, several of us walked a nearby diffuse wood, and got good looks at Nightingale and Song Thrush, but it was too dark in there for photos.

After lunch, we drove to the spot where a known pair of Sakers was in the process of fledging 4 chicks. It took a while to locate them on a distant power line trestle, but eventually, we saw at least 4 birds perched and flying in the distance.  Sakers are very large falcons, about as big as our Gyrfalcon, but much browner overall with a heavily barred tail and contrastingly pale head. We watched them at great distance through fairly severe convection currents. But the flight of one bird from one trestle to the next was distinctly falcon-like – pointed wings and very efficient, covering a large amount of ground without apparent effort with rather languid wingbeats. That ended up being our last new bird for the day.

A tragedy then occurred back at the Hotel Wende in Neusiedl am See. Zeiss reclaimed the Victory SF binoculars! Letting these go, even knowing we will be seeing them again soon, was painful. Happily, Zeiss treated us to a last really good dinner with lots of great wine and beer to ease the pain!

The following morning, everyone began departing in groups for the Vienna airport. It was difficult to say good-bye to all my new friends. Those of us with later departure times took one last walk in Neusiedl am See, which proved to be fruitful. I finally got a good look at a singing Reed Warbler. Later, I found a family group of Lesser Whitethroats, another common hedge and garden warbler. Yet they were my first of the trip. The now familiar family of Syrian Woodpeckers drilled roadside trees. We discovered a well-hidden Golden Oriole nest. The explosive song of a nearby Blackcap (photo) nearly deafened us. 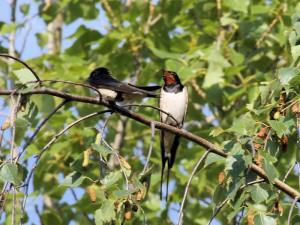 Barn Swallows gathering mud for their nests and bickering with each other. Note that the European Barn Swallows have pale white bellies, unlike the rusty bellies of our Barn Swallows. On the way back to the Hotel Wende, a Little Bittern exploded out of a little marshy edge. That gave us our best looks at this secretive species.

Magpies perched in nearby trees in town. They tend to hang around the towns and civilized areas a bit more, being less common in the wilder areas. Thought for many years to be identical to our Black-billed Magpie, the European birds are smaller and have different calls. If the split isn’t official yet, it will be soon. I spied a gorgeous male Linnet on top of a nearby pine outside my balcony as I finished packing. The Linnet is another of Europe’s numerous  beautiful little finches, related to our goldfinches, Pine Siskin and redpolls. The male has a pale grey head with red forehead and upper breast, rusty back and flanks and white undertail ? just lovely. 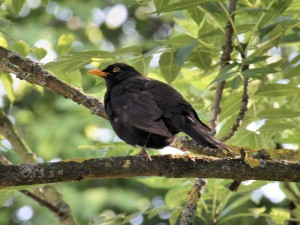 All too soon, it was time to leave. The song of the Eurasian Blackbird chased us right into the shuttle. The vineyards, fields and forests passed by in a blur on the way to the Vienna airport. And the usual frustrations and hassle of modern travel soon took over. I was lucky to share the flight back to Amsterdam with four of my fellow trip participants, which made for more pleasant travel. I wish to thank Zeiss for a fabulous trip event, for the excellent care they took of us and for the chance to see the Victory SF binocular in the field under the best possible circumstances. Reviewing this superb product will be a pleasure ? it feels like an old friend already.