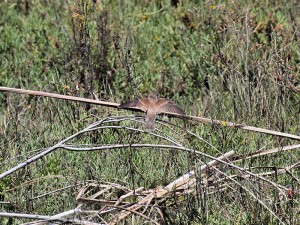 We visited the Upper Newport Back Bay Science Center recently, looking for dragonflies and butterflies. Despite a pleasantly warm morning with relatively little wind, there were very few flying insects out on Father’s Day. The Newport Back Bay Science Center is an educational facility located on Shellmaker Island in the California Department of Fish & Wildlife’s 752-acre Upper Newport Bay Ecological Reserve. While lacking a visitor’s center, this facility is open to the public on a limited basis. They have regular education programs for 7-12th-grade students and other research opportunities, as well as general public visitation hours. There is a lab with multiple tanks of fish and invertebrates like an octopus, starfish, sea urchins and so on. Out back, they have petting tanks with more starfish, small sharks and rays, and flatfish like turbot and halibut. It’s a really neat place!

Osprey Fledgling at the Science Center 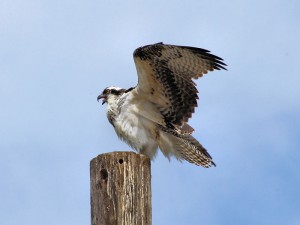 Shellmaker Island also has a very active Osprey nesting platform that has been successfully fledging birds for some years now. When we arrived, we heard the plaintive whistling of an Osprey right out of the car. Upon clearing the outbuildings of the center, we found this young bird sitting on top of a pole, screaming. Evidence of his recent fledging shows in the prominent white tips to his flight and back feathers and the streakiness of his crown.

The source of his annoyance became apparent upon further inspection: another fledgling was sitting on a low perch with a small fish in its talons. It was clearly an older sibling, successful in its hunt, but looking comically unsure about what to do next with its catch. Junior here was peeved because there was food about and no one was sharing! Eventually, he flew somewhat awkwardly back to the platform, complaining the entire way. 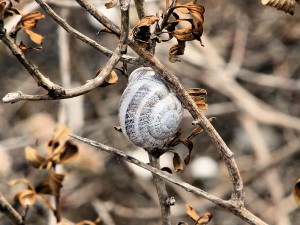 We walked the lined paths of the center and found some low bushes completely covered with terrestrial snails. Terrestrial snails differ from the garden snails common to suburban lawns and gardens here in southern California. Those land snails feature a brownish shell with the spiral all in one plane. These marine snails are quite pale with subtly beautiful brownish to black marking. They are darker at the larger end of the spiral, suggesting that they bleach out with age. The spiral of their shells comes to a low point on one end, so they are flatly pyramidal in shape, with a heavy lip at the opening to the shell. Once noticed, you suddenly realize that these snails are everywhere all over that vegetation. 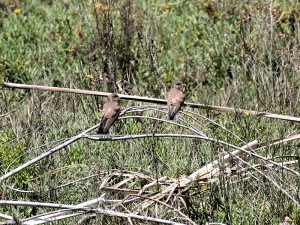 We proceeded upstream in the bay, eventually arriving at Big Canyon Pond. There, we hoped that the fresh water creek there would yield more butterflies and dragonflies. We did see two Variegated Meadowhawks chasing each other near the creek outflow, but they weren’t pausing for photos. A group of five Northern Rough-winged Swallows paused for photos, sunning on an exposed branch. We presumed this was a family group, because while there didn’t appear to be any visual difference in plumage between any of the individuals, several of them were loudly lobbying to be fed by the others. Kids these days!…

The swallows often settled for short periods on the exposed branches of vegetation, allowing closer study of their plumage. The rusty brown wingbars stood out against the darker brown of their wings and back. And the fresh feather edges of the folded wings formed a beautiful chain pattern down the inner edge. Basically, these fresh birds were a study in subtle beauty.