We attended the San Diego Bird Festival at the beginning of March, like we do pretty much every year. It’s always fun to see all those familiar folks and get in some good birding time too. Recently, San Diego Audubon took over organization of this birding festival. They did a great job of maintaining the excellence of this long-running festival.

One of the logical changes they made was to keep the vendor booths closed in the early mornings when all the festival participants are out on trips anyway, which meant that, after arriving early to set up the booth on the first day, we had extra time in the mornings, which we of course used to go birding! This allowed us to pursue some of the interesting birds that were over-wintering in the greater San Diego Area, such as the Grace’s Warbler at a nearby cemetery, the Thick-billed Kingbird, back for its second year in Chula Vista, and so on. 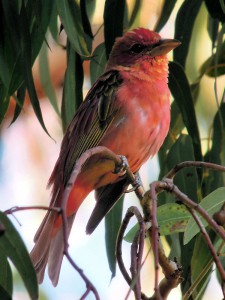 We searched for a Palm Warbler reported at nearby Westminster Park. This little neighborhood pocket park nestles in the north end of the Point Loma Peninsula. We parked in the empty lot and walked out onto a lawn fringed with red-flowering eucalyptus and sycamores. It didn’t seem at all like Palm Warbler habitat at first glance. Evidently, the warbler was of the same mind since it apparently left.

The place was just crawling with warblers though, mostly Yellow-rumps and Orange-crowns, with the occasional Townsend’s mixed in for excitement. We started pishing from a strategic location and soon had a crowd of irritated birds and one house cat interested. Seriously – we actually pished in a cat – it didn’t jump up on the fence until we started making noise! Anyway, the next thing emerging from the trees was this handsome young male Summer Tanager. He frustrated us by always staying in the shadows whenever he perched, but we still managed to photo-document him adequately. 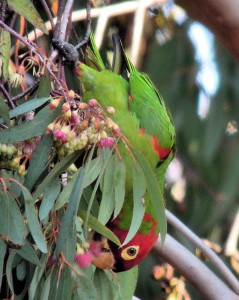 The next thing to arrive was a noisy flock of Aratinga parakeets. Small flocks of these birds roam all over Point Loma Peninsula. We’ve seen them in several other locations there. They seem to really like the red-flowering eucalyptus trees, as evidenced by this shot.

We identified these birds as Red-masked Parakeets, also known as Cherry-headed Conures. A book about the wild parrots on Telegraph Hill in San Francisco made this species made famous. Separate them from the similar Mitred Parakeet by the more extensive red on the head, crown and face. They also show more red in the leading edge of the wing, particularly in the wrist. It surprised us as always how well they blended into the trees once they made their typically loud entrance. They were actually hard to pick out in the scope even when rustling around right in front of us.

These pictures were all taken with a Nikon CoolPix P300 digital camera, attached to a Kowa TSN-883 spotting scope with a Kowa TE-11WZ 25-60x Zoom Eyepiece using  Sayegh Digidapter for Kowa TE-10Z and TE-11WZ. 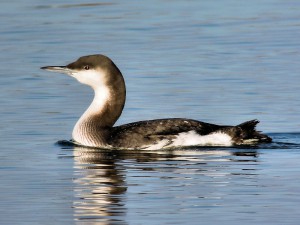 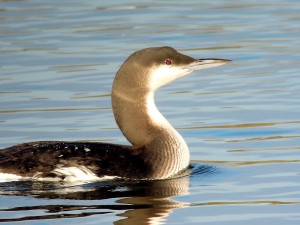 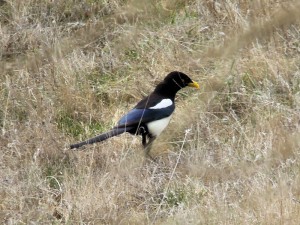 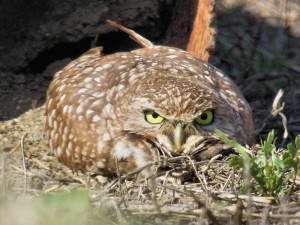 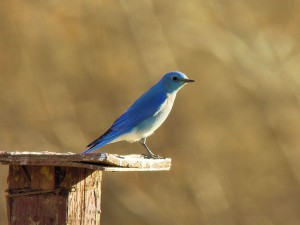 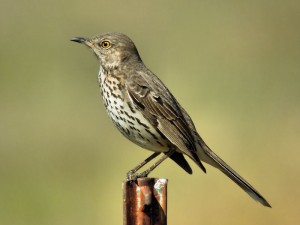 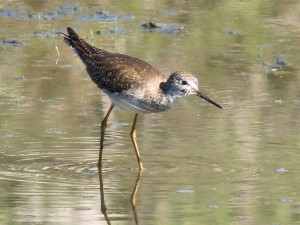 We visited San Joaquin Wildlife Sanctuary in Irvine to participate in the Southern California Audubon Coordinating Council meeting. Sea and Sage Audubon graciously hosted this event. At a location like that, arriving early allows you to go birding before the meeting starts. Naturally, we did! With winter giving way to spring, and many birds molting into their nuptial plumage, a lot of the species look really beautiful. The American Avocets all sported their peach-colored heads.

There were many Tree Swallows hawking insects overhead, with the occasional Northern Rough-winged to keep us honest. Incidentally, San Joaquin Wildlife Sanctuary hosts the southernmost breeding colony of Tree Swallows in the western U.S. Marsh Wrens and Common Yellowthroats were yelling at us from the sedge beds. And as it turned out, several unusual birds provided happy surprises. A dainty little Lesser Yellowlegs gave us great looks here. It fed with characteristic rapidity in the shallows of Pond D. Consequently, we ran into problems photographing it: it kept sprinting out of the frame! Notice the delicate beak, whose length is less than 1.5x that of the head. 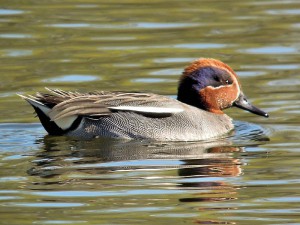 On Pond C, we found the one unusual visitor to the marsh that we knew from previous visits: Common Teal. Formerly recognized as a distinct and unique species, this Eurasian sub-species of Green-winged Teal visits us occasionally. Readily recognizable males lack the vertical white bar on the anterior portion of its flanks. Instead they sport a horizontal white bar on the scapulars that ours lacks. Another more subtle identifying feature of the drake Common Teal is the more prominent white striping in the face. Conversely, male Green-winged Teal lack this altogether, or show only a little bit. Thus, birders should watch this space for future developments. The International Ornithological Union already re-split Common Teal out from the Green-winged Teal. Hence, when the American Ornithological Union may follow suit. Either way, it’s a snazzy looking bird!

All pictures were taken with a Nikon CoolPix P300 digital camera attached to a Kowa TE-11WZ 25-60x Zoom Eyepiece and Kowa TSN-883 spotting scope, using a Sayegh Digidapter for Kowa TE-10Z and TE-11WZ.