The next day’s Zeiss Victory SF tour activities started later in the morning. However, some of us were unwilling to let the best birding of the day slide by unused. So a few of us rose at 5:00 am to walk to reedy marshes that spread like fingers into the edge of town. What a great decision! Our first reward was a brief but definitive view of Savi’s Warbler on the marsh edge. Loudly singing its distinctive low-pitched hum of a song; easily overlooked if not focused upon.

Frustratingly, we heard but couldn’t see Marsh and Reed Warblers. Thus, the Sedge Warbler (photo) that popped into view and sang loudly was a distinct pleasure. The tall cottonwoods on the edge of the marsh provided our first views of a male Golden Oriole when his flutelike song called our attention to him. The descending calls of Penduline Tits led us to two more of their nests. A walk around a grassy interior of the marsh yielded the gem of the morning: a singing male Bluethroat! Sadly, it was out of photographic range, but what a gorgeous bird! 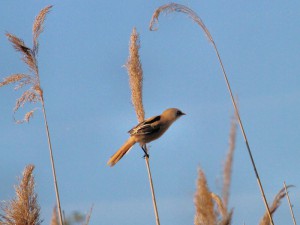 We also found a family group of Bearded Reedlings. These little birds strongly prefer marshy, reedy areas, and evidently have large broods. We saw several of the distinctive males with their pale gray heads and drooping moustaches contrasting with rusty back and wings. The juveniles have a very distinctive plumage with features the adults lack, including prominent black in the rectrices and a black facial mask. Their overall coloration is a light tan, instead of the more reddish color of the adults. All ages show the long rounded tail. It was also a delight to hear a Common Cuckoo giving the “clock” call!

Predictably, we were a bit late returning to the hotel. It’s hard to walk away from great birds! After a rushed breakfast, we boarded the bus for an excursion into western Hungary. We stopped first at an open lake with reedy islands and an elevated viewing platform. The lake was covered with several thousand European Coots and Greylag Geese, many Red-crested Pochards, Black-necked (Eared) and Great Crested Grebes, and Common, Whiskered and Black Terns. The first gem of the day was a calling Water Rail that finally appeared several times at the edge of one of the islands. Water Rails are members of genus Rallus, and thus are closely related to our Virginia Rail, which they closely resemble.

Soon the raptors stole the show. First to appear was one of several Eastern Imperial Eagles here. A Common Buzzard attacking the eagle looked as tiny as a kestrel beside it. The eagle was incredibly agile for such a large bird, flipping completely upside down to meet the Buzzard talons up, and often completing the barrel roll in leveling out.

Next up was one of the special targets here: a White-tailed Eagle. This relative of our Bald Eagle (same genus: Haliaeetus) has an even bigger wingspan. We saw it in flight at a distance of several kilometers, flashing the white tail it’s named for. Everything else in the marsh saw it too, as suddenly the sky was filled with Gadwalls, Tufted Ducks and Garganey in panicked flight towards the safety of the water. Here we also had our first well-seen Hobby of the trip, circling high over the lake. Hobbies are very handsome falcons, very dark overall, with a white semi-collar, two teardrop markings on the cheek, and heavily streaked breasts.

A Legacy Breed of Sheep 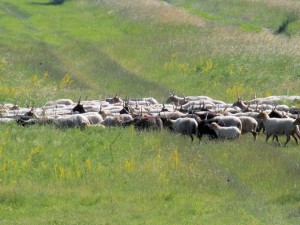 One of the interesting sights at this location had nothing to do with birds. Two shepherds and a pair of dogs brought a flock of a traditional Hungarian strain of sheep through the edge of the park and then drove them down the road. These sheep had spiraled horns – really wicked looking! We took a walk down the length of a canal beside the original lake to another lake more heavily lined by reedy edge. Here we got our first good looks at Ferruginous Ducks, which are shy and retiring and often difficult to see. On the walk, we had multiple Little Bitterns fly by. Some lucky people got to see a Collared Pratincole do a fly-by – they have a very distinctive, almost nighthawk-like wing motion. Everyone got to see the Purple Herons though (photo) flying by, slow and labored, dark and streaky on the neck. 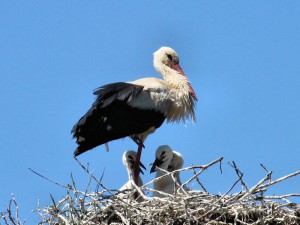 On the way to the next park, we stopped in a small town for a particularly close White Stork nest. The one shown here is of moderate size. Old nests are massive, with sticks reaching a depth of two feet or more. Note how the parent deliberately stands to shade the babies. We saw many such nests in the rural towns, some with nearly grown chicks and broods of up to 5 birds. Also at this site, we found several Little Owls. They were very good at eluding us, dropping almost to ground level before swiftly looping up into a new perch, usually in the densest part of the tree. Often the Chaffinches and Great Tits helped us relocate them, but eventually they disappeared across a field. 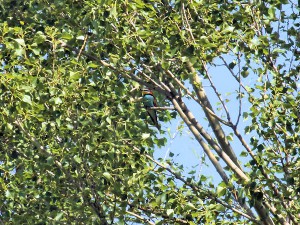 The next park featured a heavily forested area with horrific mosquitos! One of the most exciting raptor encounters of the Victory SF tour preceded our arrival: a Honey Buzzard in full flight display. First, we saw it circling over a distant woodlot, but then it suddenly swooped straight downward before looping back up nearly vertically, stalling and clapping its wings together over its back. It repeated this display several times as we all watched raptly. Another pair of Hobbies escorted a Common Buzzard from the area.

The main target here was a colony of Bee-eaters. Many people call bee-eaters “Europe’s most colorful bird”. And it would be hard to dispute that, with their pale blue chests, bright yellow throats, reddish cap and upper wings, black face masks setting off red eyes, and white foreheads. Bee-eaters nest colonially in holes (photo) in dirt cliffs and banks. From there, they cruise around in the vicinity of their colonies, grabbing bees and other insects, making distinctive chirping calls.

Their flight is hypnotic with bursts of rapid, shallow flapping followed by stiff-winged glides. The flight silhouette (photo) is diagnostic. The long-billed faces, sharply triangular wings and fanned tails with pointy central rectrices are unmistakable. They seem restless, almost never alighting, endlessly patrolling the skies. The walk back to the bus was productive, yielding great  views of a Wryneck feeding on the road. A brief appearance by a Sparrowhawk bursting down the road startled us. We ran (literally in some cases!) the mosquito gauntlet back to the bus and headed back for dinner in Austria.