For our first day of birding on the Zeiss Victory SF tour, we boarded the bus in Vienna at 6:30 the next morning and headed for Neusiedl am See, our base of operations for the rest of the tour. Neusiedl am See is located on a large lake, the Neusiedler See, in the southeastern part of Austria, nestled in the wine country near the Hungarian border. This lake has extensive marshy edges, making it a haven for waterfowl, herons and shorebirds. With laudable directness, we drove right past our lodgings and got straight to the birding, traveling clockwise round to the southeastern shore of the Neusiedler See. 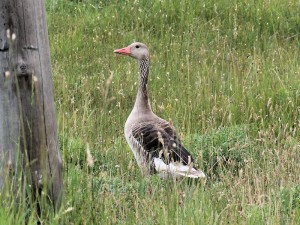 Greylag Goose at the Neusiedler See

Our first target was a family of Hoopoes, but along the way, other birds started to show up. Kestrels hovered and dipped over the fields and vineyards. We saw our first White Storks, sitting on nests on top of buildings like something out of a childhood story. Close to the See, water birds appeared on the little marshy lakes. We saw Shelduck, Greylag Goose and other waterfowl, plus our first glimpses of Avocets and Black-winged Stilts along the muddy shores. Koinrad Lorentz wrote about these geese decades ago. I loved seeing them!

The occasional Marsh Harrier passed overhead, sending everything rocketing skyward. The Hoopoes didn’t disappoint, with an adult foraging on the ground with several sub-adults. Their outlandish crests counter-balanced their long decurved bills, and reddish neck feathers above zebra-striped wings. And the crisp optics on the Victory SF binoculars made the colors and details just pop! A pair of Red-backed Shrikes (photo) and Turtle-Doves purring from the trees soon distracted us from the water birds.

We walked out to an elevated observation platform and the birds kept coming thick and fast. Sedge Warblers sang, popped into view, and were instantly gone again. We heard the low thump of a Bittern, and watched it lift from the marsh and fly ponderously by. Great Reed Warblers sang loudly from hidden perches, sounding a bit like Yellow-breasted Chats. Our first Garganeys showed, looking sharp, followed by a really snazzy bird: Red-crested Pochard! Once, a Squacco Heron flew by a few of us, the only one of the trip. Whiskered Terns coursed low over the marsh.

We saw and heard our first Common Redshanks, which put on quite a show, flying around and calling. A splash of color and song in a distant bush proved to be our first Reed Bunting, a really sharp-looking bird with a black hood, white neck ring and moustachial, reddish-brown back and white mixed in with predominantly black rectrices. A buzzy song like a Grasshopper Sparrow turned out to be a Corn Bunting, with Skylarks lifting into the air and singing around it. 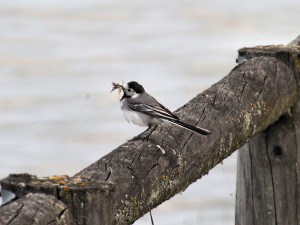 The next stop added our first Spoonbills and Common Pochards, along with Great Crested Grebes, White Wagtails, Black-headed Gulls and more. Having only seen Black-headed Gulls as vagrants in basic plumage here in the U.S., viewing them in full alternate with their black heads was quite a treat. A distant male Black-tailed Godwit in full alternate plumage was a really gorgeous find, with its rusty orange head and neck, mostly reddish upswept bill, and black hatching across the upper breast. For me, this was a bit of closure: “blackwit” was my fourth and final of the world’s godwit species. Next to appear were fly-by Pygmy Cormorants and Yellow-legged Gulls. Pygmy Cormorants differ from our cormorants in having a distinctly brownish head, stubby short bill, pale yellow-orange gape and a white throat.

Our next location featured a stakeout Penduline Tit nest, with both male and female tending the tightly woven purse-like nest. Both parents work to line the nest heavily with cottonwood fluff. The nest hangs from the “handle” portion of the purse, with openings out either side, and it, rather than the birds’ habit of suspending themselves upside down, is the source of their common name. These tits look like very jazzed up Bushtit, with a whitish-gray head, black mask (like a Common Yellowthroat) and reddish tint to the upper wings. Penduline Tits (photo) have a down-slurred call note reminiscent of a Lesser Goldfinch, which, once learned, makes their nests easy to find. We saw at least 10 nests on the trip.

Eurasian Goldfinch and a Red Admiral 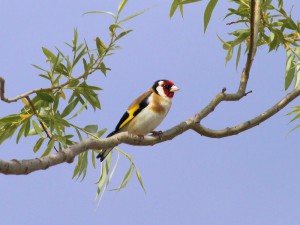 The other bird drawing notice here was a Eurasian Goldfinch that posed obligingly on an open willow branch. Amazingly, it sat there while the entire group closed in and collectively took several terabytes of photos in a matter of seconds. This goldfinch is a common hedge and garden bird all over Europe, but what a gorgeous one! We also saw many Red Admiral butterflies here, the same species found here in the state. 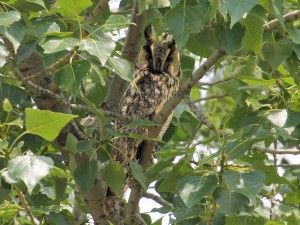 We visited a communal roost of Long-eared Owls, with both adults and sub-adults present. This is the same species as our Long-eared Owl, and they are just as arresting there as here, when encountered. Sometimes, they are surprisingly difficult to locate. Thus, it was unclear just how many owls were roosting here; the more one looked, the more there were. (Juvenile Long-eared Owl Photo)

Here, a partially fledged Kestrel peaked our interest. European Kestrels differ substantially from our American Kestrels. They are larger, more long-tailed,  and reddish on the back with grayish blue head and upper tail. Similar to our kestrels, they frequent open country, sitting on power lines or hovering over the fields. They aggressively attack larger raptors like the common Buzzard (a buteo relative of our Red-tailed Hawk), where their aerial agility earns them some respect. A handsome juvenile perched on a low branch of a sapling cottonwood. There it tolerated closer approach than an adult would allow, affording great looks. 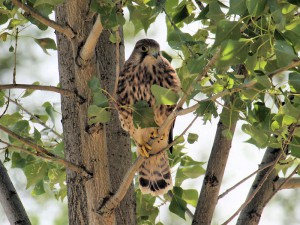 Our next stop was a reedy canal right on the Hungarian border. When you walked to the other side of the footbridge, you crossed into Hungary! Our target here was a common bird: Great Reed Warbler. Skulking birds like this are often hard to get really good looks at. But here, we managed to coax one of these 7.5-inch Old World warblers into the open where it repeatedly sang its chat-like song. Next was an active nest of the Eastern Imperial Eagle, a relative of our Golden Eagle, slightly smaller, with much darker overall coloration on the body, back and wings but the same golden head plumes.

This nest occurred in a preserve; thus we could not stop within a kilometer of the nest. So we observed from a respectful distance. One dark, downy chick was visible sitting up in the nest, and the two parents perched on an exposed branch of a nearby tree, allowing us to see the tremendous sexual dimorphism common to raptors, with the female being markedly more massive than her mate.

Great Bustards on a Lek

From there, we continued in the same preserve, hitting a trifecta of great birds. First we saw a hunting male Montagu’s Harrier, smaller and sleeker than our Northern Harrier. Monties show inky black wingtips and a diagnostic black bar in the pale gray secondaries. Effortlessly, this bird glided low over the contours of the hedge-lined fields.

But the next bird trumped even that: a displaying male Great Bustard. A Great Bustard, at about 40 pounds, is one of the world’s heaviest birds that’s still able to fly. Great Bustards reproduce in leks. In a delightful surprise, we got to watch a male display to three rather bored-looking females. He practically turned himself inside out for the girls, erecting and everting his tail. Next, he flipped his wings inside out and held them flat against his flanks. Then he puffied out a great whitish throat sac, and lifted the white whiskers on each side of his bill. All the while, he strutted and bowed, sometimes turning his head upside down. Meanwhile, he continuously uttered a low-frequency call that was flat-out rude, sounding like someone in severe gastrointestinal distress.

We watched at a distance of perhaps a third of a mile from an elevated platform. Hence, convection currents pretty much destroyed any chance of good photos, but what a great bird!! Lastly, our sharp-eyed guide, Dr. Gerry Dobler, found a Black Stork, our first of this rarer European stork species, circling over a distant pine grove. Scope views of this soaring bird revealed the diagnostic flash of greenish iridescence on its back as it circled. A tired but very happy crew of birders stumbled into dinner that evening!