We took a very brief trip (2 nights) during mid-May to see the Yosemite owls. We principally timid our trip to correspond with the peak calling period of the Flammulated Owl. Also by planning a trip before end of May you can avoid masses of people that arrive for Memorial Day. What we did not plan for was the moon phase and rising. As it turned out there was no moon and overcast skies. Managing to photograph this sparrow sized owl on a pitch-black night, in a dense forest is almost impossible. We spent several hours on our first evening trying to locate this very small owl. Modifying our search, we decided to look for some of the other Yosemite owls. 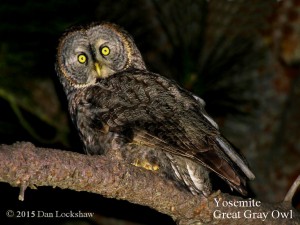 On our way into the park we had heard Great Gray Owls calling in the Wawona meadow. We headed back to this location to see what we could find. Two Great Gray Owls were calling in the forest across the meadow. WE spent about a half hour trying to entice the owls out of the forest. Finally  one of the owls flew over to the tree that we were standing under. The problem was that he was about 40 feet up and there was no clear view to the owl. After another half hour of trying to get him to fly over to the next set of trees, that we had walked over to, he flew back across the meadow into the forest. At this point we decided to try another location just outside the northwest side of the park.

After driving for an hour to another location we found a missing forest! Fires had decimated the forests since I was last here. After an hour of searching remnant patches of forest it appeared that what was one of the best areas I know of in the Sierras for a half dozen species of owls was void of the sounds of life. I remember hearing about this fire on the news and there being suggestions of it being arson. I did not know it had made it this close to the Yosemite border. Species like Spotted Owl would have died and do not relocated after a fire of this magnitude. It will be a minimum of a hundred to two hundred years before they return. Yes, the forest would recover, but not in my lifetime. It was time to head back into the park boundaries.

When we got back to the south side of Yosemite, it was very late and time to get some rest. We got a few hours of very haunted sleep with the considerations of what horror fire brings to habitat and wildlife. By the sounds of the forests in the places we had stopped, we gained some knowledge of where we might look on our second night. Hopefully we would do better at getting photos of the Yosemite owls then.

Great Gray Owl – Our First of the Yosemite Owls

After spending a few hours, the next day looking at habitats we decided to start our second evening back in Wawona in hopes of attracting a Great Gray Owl into view. Even with my best squeaks over about an hour period only one Great Gray Owl made a very short series of single note hoots. Since we could hear many Saw-whet Owls calling we decided to go give a try at them. 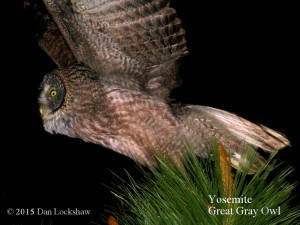 Great Gray Owl took off as we got near

On our walk out and before giving up on the Great Gray Owls too, we decided to spot light the area where we had heard the owl briefly hooting about a half hour earlier. We scanned the trees with our binoculars. Sure enough, there was a beautiful Great Gray Owl sitting at the top of one about 40 yards away. Probably enticed by my squeaks but not enough to fly over to us in the pitch-black night, he sat at a comfortable distance.

We had no problems walking over to him but as soon as we got close enough to take a picture he flew another 50 yards away to another group of trees. With one photo of the owl flying away we walked to the set of trees where he had flown. This time he sat on a branch just long enough for me to get one photo of him sitting there. We had success with probably my favorite owl in the area! We could now consider trying for some of the other Yosemite owls.

After trying to find one of the very vocal Saw-whet Owls in the area, with no success, we finally decided to go back to try again for the Flammulated Owls. With the same “no success” at finding one of many vocal Flammulated Owls we decided to get a couple hours of sleep and come back when the moon was coming up at about 4:00AM. The next thing I remember after laying my head down was seeing dawn coming through our windows. 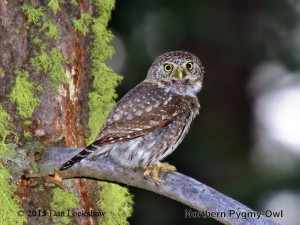 Racing back out it was just too light for any Flammulated Owls to be calling. On the brighter side of things the first place we stopped we had a Northern Pygmy-Owl calling for the early morning. During the next couple hours we managed to find two more pygmy-owls. I had wanted to get good photos of this owl anyway and I did manage to get a few. 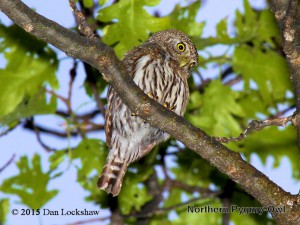 The Northern Pygmy-Owl is a diurnal owl

Pygmy-Owls are ferocious little owls not much larger than a sparrow. When they begin to call the small birds of the area arrive in mass to drive away this fierce predator. Finding them is often as simple as watching the mob of other small birds who will be close by and making lots of noise. One of my first sightings of a Northern Pygmy-Owl was one falling almost at my feet in the snow with a struggling robin in his talons that was half again his size. 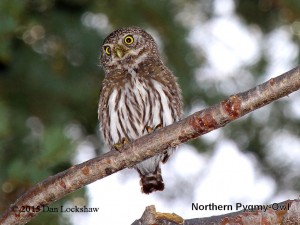 The Pygmy-Owls were a great ending to our brief visit to see the Yosemite owls. We had a seven hour drive ahead to get back to Southern California for work the following day and it was time to head back. Hopefully we would get a chance again soon to come back to photograph Flammulated Owl in better conditions. In our search for the Yosemite owls we had heard Spotted, Flammulated, and Northern Saw-whet Owls besides the two that are photographed here in this post. These species we will pursue in future excursions back to see the Yosemite owls.