American White Pelicans are large, mostly white birds. Their primary and secondary feathers are black. In breeding season adults develop a yellow crest. Juvenile birds display a brown wash on the head, neck and wings. Non-breeding adults have yellow bills, which turn more orange and grow a vertical fibrous plate on the maxilla (aka upper mandible) for breeding. They shed their plates after the eggs have been laid.

American White Pelicans generally inhabit fresh water rivers, lakes, and ponds. They also visit saline bodies of water inland such as the Salton Sea, Mono Lake, and the Great Salt Lake. American White Pelicans range along the Pacific and Gulf coasts in the winter. They migrate inland to the Rocky Mountains in the US and Canada to breed and fledge young. American White Pelicans are social birds. They congregate in large flocks, roosting on beaches and islands or fishing cooperatively by herding schools of fish into a confined area. Contrary to the famous limerick by Dixon Lanier Merritt,

A wonderful bird is the pelican,
His bill will hold more than his belican,
He can take in his beak
Enough food for a week
But I’m damned if I see how the helican!

pelicans do not use their beaks for storing food. American White Pelicans feed by floating along, their heads under water to find their prey, scooping the fish up in their bills. In contrast, Brown Pelicans dive into the water to grab their target fish.  These three birds fed in a well-stocked pond, so herding was not necessary. They caught a fish on nearly every attempt. 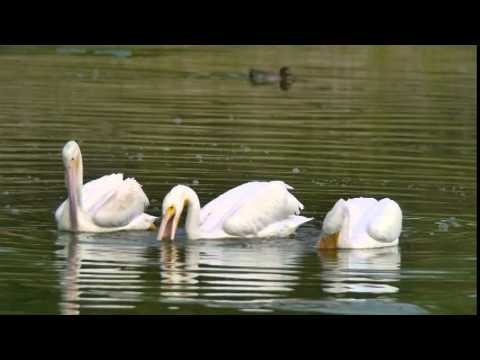 The three American White Pelicans in the video illustrate how graceful these large bird can be on the water. They are just as graceful in the air. Seeing a large flock lift off in migration is always a stunning sight. They lift off of the water, using thermal updrafts to circle and climb thousands of feet on their springtime northern push.

The video was recorded on a micro 4/3 camera connected to a Kowa TSN-884 spotting scope with TE-11WZ eyepiece by means of a Kowa TSN-DA10 adapter.