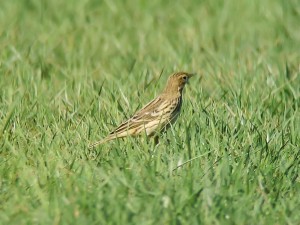 Most Red-throated Pipits migrate down the western Pacific and winter in China and as far south as Australia. Some of the more eastern breeders take a more easterly route. These 6-inch passerines fatten up on the islands in the Bering Sea and then head off on a 3,000 mile flight across the Pacific Ocean to the California coast. While annual each October in southern California in small numbers, mostly on sod farms, Red-throated Pipits are almost unheard of much north of the San Francisco Bay Area. This tells us that they rarely follow land and fly straight across the ocean. The Red-throated Pipits that migrate through SoCal winter in Baja California. eBird records show them wintering near La Paz, Baja California Sur, Mexico. 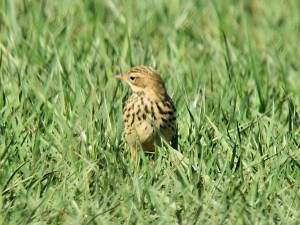 Red-throated Pipits usually feed on the ground with American Pipits, longspurs, shorebirds, and blackbirds. They prefer deeper grass and are sometimes very well hidden from view. When they reach southern California, they have molted into basic plumage and show little to no red on their throat. Instead, Red-throated Pipits show heavy, black streaking with a buffy or white background on the chest and throat. These streaks are bolder and more distinct than on American Pipits. The most noticeable distinction, though, is the bold dark brown and black streaking on the back, accented by white or buffy braces (longitudinal stripes) along the outer scapulars. The backs of American Pipits are a medium-dark olive with somewhat darker streaking that doesn’t readily jump out at the observer. 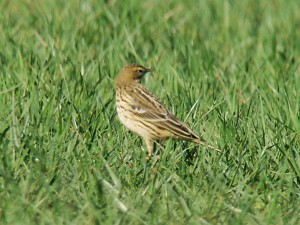 These flocks of feeding migrants are delicacies to raptors. Red-throated Pipits tended to work the middle of the fields, sometimes using sprinkler pipes to hide next to. This necessitates the use of a spotting scope to get good looks. These photographs, taken at the Dairy Mart Sod Farm in south San Diego County, were digiscoped using a Kowa TSN-884 spotting scope and a micro 4/3 camera. The distance to the birds was between 400 and 500 feet.