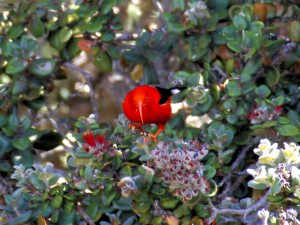 The ‘I’iwi (pronounced ee-EE-vee) is an endemic Hawaiian honeycreeper. We recently photographed this spectacular scarlet colored bird on Maui. It was once widely distributed throughout the Hawaiian Islands. The big island of Hawai’i accounts for 90% of today’s their population. Most of the remaining population in Eastern Maui and Kaua’i. Very small groups of this bird are also present on the islands of Oahu and Moloka’i but their numbers are extremely low (below 50 birds).

The ‘I’iwi (Vestaria coccinea) has a fiery red body, black wings and tail. The wings have a contrasting white patch on the inner secondaries but lacks the white undertail-coverts and lower abdomen of the ‘Apapane (a similar Hawaiian honeycreeper). This species has evolved a long, decurved, salmon-colored bill for collecting nectar from the native flowers (primarily Hawaiian lobelioids). The similar ‘Apapane has a shorter, less curved, black bill. Although the sexes of the ‘I’iwi are monomorphic (look the same) the male is slightly larger (~10%). Their average size is about 6 inches long and they weigh about 18 grams.

The ‘I’iwi is primarily nectarivorous although it will also eat foliage, insects and spiders. The long, decurved bill of this bird was thought to have coevolved for feeding on the long, curved corollas of Hawaiian lobelioids. With sharp declines in habitat, this bird now feeds on a variety of non-tubular plants. The photos here show it feeding on the blooms of the ‘Ōhi’a Lehua tree. A decrease in bill size of 0.5 mm during the past 86-100 years has been recorded. This may have resulted from a dietary shift to ‘ōhi’a resulting from the declines and extinctions of the lobelioids. It is a very active feeder, spending only a few seconds at each bloom. It feeds mostly at the mid to upper strata of the canopy, never on the ground.

The ‘I’iwi is monogamous within its breeding season. The breeding season on the island of Hawai’i begins in October and November with peak breeding in February through June. This season may be a bit later on Maui and Kaua’i. This coincides with the seasonal availability of ‘&#3323hi’a nectar.

The nest is a small cup made of tree fibers, petals, and down feathers. Nest construction by both adults requires 4 to 5 days. The eggs are approximately 0.8 inch long x 0.6 inch in diameter, white with dark chocolate markings and are laid 1 to 5 days after the construction of the nest.  The eggs hatch in 14 days. The female lays 2 to 3 eggs and does the brooding while the male continues to feed her during the first few days. Thereafter the female will forage during the day and brood at night. Both parents feed the nestlings. The young leave the nest at 21 to 22 days but remain under parental care for up to 4 months. 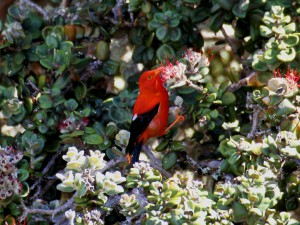 Longevity of the ‘I’iwi in the wild is unknown although lifespans of other honeycreepers range from 5 to 12 years. Yearly survival rate for this species is the lowest of any Hawaiian honeycreeper.

The ‘I’iwi was originally spread throughout all of the Hawaiian Islands at all elevations. Polynesians colonized the Hawaiian Islands around 400 A.D. and radically changed ecosystems by burning vast areas of forest for agriculture and introducing nonnative plants and animals. In the early 1800’s American and European ships brought mosquitos and rats to the Hawaiian Islands. The introduction of mosquitos brought the spread of avian pox (Avipoxvirus spp.) and avian malaria (Plasmodium relictum). These diseases are lethal to this species. Since these mosquitos cannot survive at high altitude (cold temperatures) the species has found a safe haven above 4500 feet in elevation. Their safety area declines as global temperatures rise. The ‘I’iwi faces a dilemma that threatens their safety. Doom may be their inevitable fate.

Of course habitat destruction is also a major concern confronting the ‘I’iwi. Loss of habitat due to the clearing of forests for farming, grazing, and development is a major factor contributing to its decline. Predation on eggs and chicks by introduced mammals, particularly black rat (Rattus rattus) and feral cat (Felis catus) is a concern. The introduced Polynesian rat (Rattus exulans), Norway rat (Rattus norwegicus), mongoose (Herpestes auropunctatus), and Barn Owl (Tyto alba) may also take ‘I’iwi. Feral pigs dig hollows which also add breeding locations for disease-carrying mosquitos. The list goes on. For these reasons the IUCN which formerly classified ‘I’iwi as near threatened, in 2008 uplisted the species status to vulnerable.

The spectacularly colored ‘I’iwi is a native bird of the Hawaiian Islands. We would hate to see it disappear through man’s misgivings. It seems we have trapped this beautiful species with nowhere else to go. If the ‘I’iwi moves downslope following flower blooms it becomes extremely vulnerable to disease. There is limited upslope habitat to support them. Sometimes I wonder what we will leave behind and if we can stop the declines in nature we have set in motion.