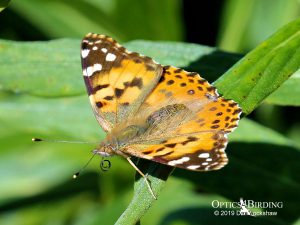 The 2019 Painted Lady movements through Southern California were impressive. In a time when immense wildlife explosions of anything are almost unheard of, this colossal migration was distinctive. Thoughts of enormous arthropod (insect) invasions so often bring concerns of other hostile species to mind. The Painted Ladies were a magnificent blast of beautiful color.

In March 2019, the Painted Lady northward migration saw huge spikes in the number of butterflies over previous years. This was thought to have been their single largest migration since, possibly, the late 1960s. Remarkable waves of Painted Ladies flowed through the cities and deserts alike. Previous, yet smaller, movements of this butterfly happened in 1998 and again in 2005. The 2005 migration year was estimated at one billion butterflies. The spectacle of this movement was striking. The soft orange butterflies travel at fast speeds with direction, intent, and purpose. 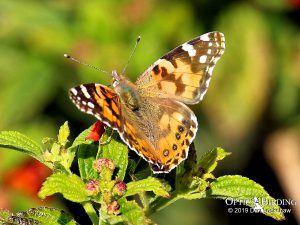 The Southern California Painted Lady northwest migrations happen yearly in March. This northwestern movement may take multiple generations to reach the pacific north-west. Successive generations then return southeast in the fall. Fall migrations are much more dispersed and less noticeable potentially due to high altitude return travel (noted in Europe). It is this north-south movement that defines a migration, even though this specific species does it in successive generations.

The massive spring 2019 movements of the Painted Lady were thought to be a result of the high levels of rain in the California deserts and Northern Mexico. Heavy desert rains cause the deserts vegetation to flourish. This, in turn, gave the Painted Lady caterpillars ample food to support high survival rates and a subsequent explosion of butterflies.

The exact causes of these events are not totally known. The complex effects from our El Niño weather pattern has also been attributed.

In our busy Southern California lives, sadly, many people only noticed the few days of excessive butterflies hitting their windshields. Thick clouds of Painted Ladies passed through Southern California. If you slowed down long enough to look, the movements of these beautiful and colorful butterflies were just awesome! 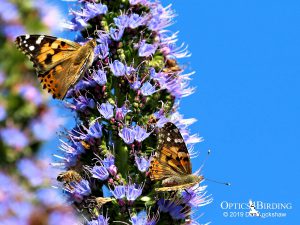 Since the Painted Lady migrates yearly, the 2019 Southern California movements may have been the largest worldwide. Almost as quick as they appeared, though, they seemed to vanish; a few days of remarkable numbers. Further up in California there were not the miraculous number of butterflies arriving as in Southern California and they were much less condensed.

Our thoughts are that the Painted Ladies stopped unusually short of their long trip ahead to feed. California is amidst a super bloom because of all the rains. The abundance of wildflowers and food for the butterflies may have caused many of the lady butterflies to stop and breed more quickly on this first leg of their journey north.

The first flight north for the Painted Lady was a burst of color in Southern California. Because of the shear size of this initial movement, it caught the eye of the public. This was an unexpected, albeit brief, breeze of beauty sweeping through Southern California. In a time when the news of our wildlife is generally alarming, the March 2019 Painted Lady migration was a pleasing change. In the middle of a butterfly crisis, this news is exceptional.

Taking a few steps backwards in our look at the Painted Lady, clear definitions are needed. Starting with basic biology, all butterflies are arthropods or insects. The scientific name is labeled first by genus and then by species. For example, Painted Lady is Vanessa cardui. To describe our Painted Lady, we do need to explain some terminology and basic butterfly anatomy. This gives the reader the knowledge, in the field, to clearly identify this species of butterfly. As a matter of fact, these are the fundamentals for all butterflies. 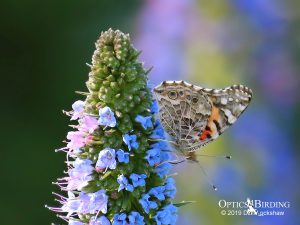 Butterflies have four wings, two forewings (front) and two hindwings (back). There is a dorsal (colorful) side and a ventral (closed-wing) side. The body consists of three parts. From the forward end down along the body, these parts are: head, thorax and abdomen. The forewings are attached to the thorax and the hindwings are attached to the abdomen.

The Vanessa butterfly genus consists of 22 extant species, 4 of which reside in the US. Three of these species are lady butterflies that are discussed below. Red Admiral Butterfly (Vanessa atalanta) is currently the fourth butterfly in this genus here in North America. Since this article is about the lady butterflies, no further discussion of that species will be mentioned here. There are 205 different butterfly genera in North America.

The next level down in the scientific definitions are the actual species. There are 725 currently accepted species of butterflies in North America. Painted Lady (Vanessa cardui) is the most prevalent butterfly in the world and US. This species exists on almost every continent in the world. The only continents that this butterfly does not exist on are Antarctica and South America. Note: Australian Painted Lady (Vanessa kershawi) is considered by many to also merit its own distinct species. This would replace our Painted Ladies (Vanessa cardui) on the Australian continent. 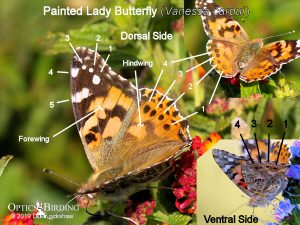 Often called the cosmopolitan butterfly because of its near global distribution. Its scientific name translates to ?butterfly of thistle? since thistle plants are its favorite nectar plant.

This species of Lady Butterfly is identified as follows. The figure at the left defines terminology and the specifics of the species. Starting with general butterfly anatomy, the Painted Lady wing parts can be divided into the colorful (dorsal) and closed wing (ventral) sides. There are two pairs of wings that consist of the two forewings (front) and two hindwings (back).

The Painted Lady has four eyespots on the ventral side of the outer hindwing. These are indicative of this species. Where more than one species exists, the five clean white spots on the black wing tips of the dorsal side are the most distinctive markings to separate this species. 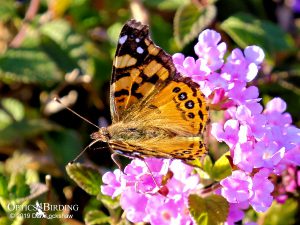 We also have resident Vanessa Annabella, shown here, known as the West Coast Lady. This species is non-migratory. It is quickly differentiated from the migrating Painted Ladies by the large, orange inner bar or spot on the black dorsal wing tip. It is resident here in Orange County and mainly seen at lower elevations. The photo on the right was also taken during this migration of the Painted Lady. The West Coast Ladies sometimes fly around with the Painted Lady, but their numbers were much lower in comparison. 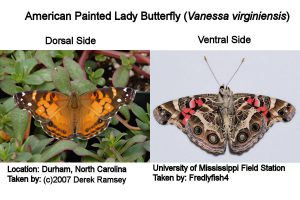 Vanessa virginiens is much more common in the eastern half of the US. It is commonly known as the American lady. Like the West Coast lady (Vanessa Annabella), the innermost spot or bar on the black wingtip is orange (see Illustration #1, #5 on black wingtip).

There are two additional characteristics of this species that are significantly different from the other two species mentioned above. The American Painted Lady may show a single white spot in the orange region of the dorsal side below its black wingtip. On the ventral side of the American lady it also has only two eyespots on its hindwing.

Like the Painted Lady (Vanessa cardui), the American Lady is migratory. Northward movement out of its southern ranges occurs yearly. The subsequent or successive generation will then move back south. We note that, at least here in Orange County, California the American lady is not very often seen. 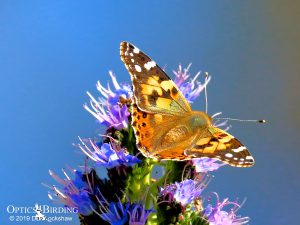 Our yearly Painted Lady (Vanessa cardui) migration happens over about a three-week period. The extraordinary numbers here were distinctive for several days. Most of the people at Optics4Birding are observant of the world of nature around us. The consensus was that this movement was extreme and unmistakable for only a few days as the butterflies passed through our area. Even so, it certainly caught our eyes. Successive thick clouds of butterflies swept through the city.

The Painted Lady is very directional in its movements and may hit speeds of 25mph. Although its general north-westward movements are low off the ground (6-12 feet), it has been recorded as high as 3,000 feet during its return migration from Europe to northern Africa. It has often been questioned why return migrations are seemingly so mild in comparison. High elevation return flights might be one reason we don?t see the massive return (southern) migrations. A more casual and leisurely flight to the southerly breeding grounds may be another. These details are uncertain, and more research is warranted.

The lady butterflies are considered a large butterfly with a wingspan of 2.0-3.5 inches. Their complete lifespan as a butterfly is only two to four weeks. At the end of its butterfly life span the female Painted Lady can lay up to 500 pin head sized eggs.

Three to five days after the eggs are laid the larval caterpillars eat out of their eggshells and consume them. After five to ten days of eating, four skin sheds, building a leaf nest at each skin shed, and final full growth, the caterpillar body is about two inches long. Being lightly haired with yellowish spines, the black caterpillar has off-cream (or yellowish) colored bands marking its mostly black body and black head.

The last stage in our butterfly evolution is the pupal or chrysalis stage. Most of us think of this as when the caterpillar creates a cocoon. In this stage the caterpillar attaches itself to a leaf with a silk pad and hangs upside down. After 24 hours the final skin splits open exposing its dull brown cocoon. About a week later our Painted Lady Butterfly emerges. 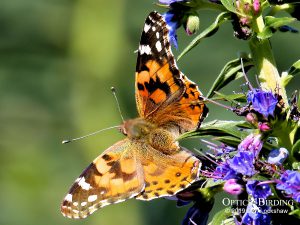 The Painted Lady is typically associated with open lowland fields and meadows with vegetation. This ultra-successful species may nevertheless be found in a vast variety of habitats. Sometimes called “the suburban butterfly” since it is so often seen in the suburban city areas. Its summer home range includes a vast variety of habitats ranging from tundra at its northern extents to almost all lowland habitats. A few of these include bogs, swamps, forest, rainforests, and dunes. It will even make mountain meadows a home range. They are common from agricultural areas to even deserts and mountainous areas. The success of this species may largely be attributed to its tolerance of habitat.

As we watch the 2019 reports up through the state, isolated large numbers of Painted Ladies are being seen in all stages of their growth. The butterfly and caterpillar stages are most notable to the public which continue to make the local news up through the state. The initial dense and colossal movements that inspired this article may have spread out, but a major north-west migration continues. This also continues to be an event of extreme grandeur slowly moving north-west.

As we began, wildlife movements of this magnitude are becoming extremely rare. Our California state is amidst alarms for many of the species ranging from butterflies to bees to mammals to birds. The Painted Ladies’ north-western migration may continue through as many as six generations and create many spectacular events. The first massive movements inspired this post. It brings hope that our magnificent world of nature has not slipped off into an uncontrollable spiraling decline. With a bit of luck, we may see many more of these exceptional wildlife movements. Studies indicate these Painted Lady blooms can happen twice a decade. This year’s lady butterfly migration has been and continues to be a stunning reminder that our future holds hope of unexpected waves of natural beauty.