While birding at San Joaquin Wildlife Sanctuary in southern California on 31-AUG-19, we found a plover with an unusually heavy black breast band. This bird was feeding on the mud of the ponds beside a handful of Semipalmated Plovers, and other shorebirds. Compared to nearby Semipalmated Plovers, this plover seemed slightly larger – just a tiny bit huskier and longer-winged. Further observation of the bird suggested we had found a wildly out-of-place Common Ringed Plover, Charadrius hiaticula. We sent word out to the local birding websites and hotlines, and at that point, the circus began!

What Makes It A Common Ringed Plover? 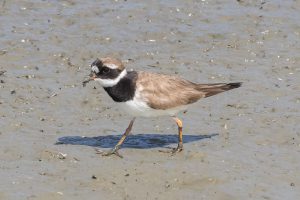 Many features that distinguish Common Ringed from Semipalmated Plovers (Charadrius semipalmatus) are minute and subtle. They can be very hard to observe, let alone document. There were seven Semipalmated Plovers clustered around the pond where the mystery plover was foraging. All of them were either females or juveniles; not a single adult male Semipalmated Plover was present. This was, in itself, a little odd. The unknown plover male really stood out with its very wide, black breast band. 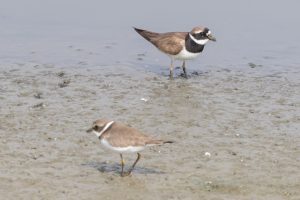 Other less obvious differences became apparent with more prolonged observation. First, this bird had almost no visible eye ring. The “Semi-plovers” all sport orange, fleshy eye rings. This Common Ringed Plover showed a narrow black eye ring, only visible in direct sunshine. Second, where the Semipalmated Plovers had limited white arcs in the hind portion of the supercilium. The Common Ringed Plover had a longer white supercilium that extended from just about the middle of the eye to well behind it.

Through most of our observations of this bird, clingy mud coated its bright orange legs.  Still more mud obscured the shape of its bill. Eventually, we were able to obtain photographs showing a little more of the subtle bill differences. The base of the bill was not quite as thick as that of nearby Semi-plovers, and it was slightly longer too. Both species showed plain and bright white underparts from the bill all the way to the vent. But one subtle and clinching difference concerns how the white chin of the Semi-plovers extends up to just above the gape. This differed from the black face of the Common Ringed Plover which clearly dropped down to just below the gape.

About Those Webbed Feet… 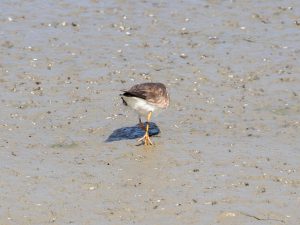 The literature also claims several other marks for separating these two very similar species. First, we address the eponymous palmation of the Semipalmated Plovers. Yes, these little plovers have webbing between their long central toe and the toes on either side. In Common Ringed Plover, this webbing is absent between the inner and middle toe and reduced  between the outer and middle toes. It took a long time to document this on the Common Ringed Plover. Eventually the bird waded into the water, and then walked around, showing us its feet. This provided an opportunity to document its foot webbing. The facial black of this Common Ringed Plover extended through the auriculars all the way back to the brown nape. In a male Semipalmated Plover, the black would go to brown in the auriculars, well short of the nape.

Common Ringed Plover comprises three sub-species, per the website, “Birding Newfoundland with Dave Brown” (see link below). These are: 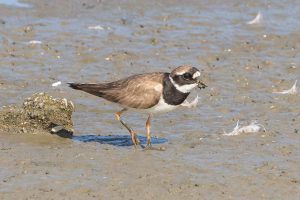 All three sub-species typically winter along coastal Africa, but they take different routes to get there. This raises the question of where birds found in North America come from. Birds appearing in Atlantic Canada are likely of the type sub-species, hiaticula, or the western Europe sub-species, psammodroma. Whereas birds appearing on the Alaskan islands and the west coast of the United States probably represent the tundrae sub-species. Almost all birds occurring in the lower 48 states appear during August and September.

Per the article cited, there were nine previous records of Common Ringed Plover in the continental United States. The article is no longer current in this regard. A bird at Point Reyes National Seashore in 2018 and this bird, bring that total up to eleven. Those birds that don?t stray too far from their normal range might retrace the route they followed. But those that stray as far south as North Carolina or southern California may winter with Semi-Plovers. What the 2016 Common Ringed Plover in Illinois did is anybody?s guess! 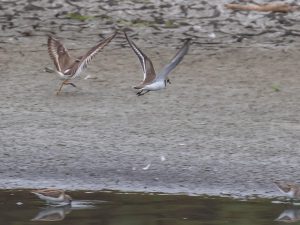 Piecing together the story, some birders saw the bird (but didn’t identify it) on 28-AUG-19. This happened again on 30-AUG-19, with birders noting its strangeness but not identifying it to species. You can sort of understand why. Heavily marked male Semi-plovers and male Common Ringed Plovers show some overlap in the width of the breast band. The rest of the identifying features for Common Ringed Plover are quite subtle. Females and juvenile birds of both species are even harder to tell apart.

Making matters worse, some experts cite “distinguishing” features that don?t actually distinguish, the two species. Some experts claim that Common Ringed Plover has more white on the upper wing surface than does Semipalmated Plover. We looked at this character in the field but could not find a consistent difference either way. The calls of the two species are fairly distinctive. Many people heard the Semi-plovers vocalize. The Common Ringed Plover, however, never made a peep – perhaps an unfortunate word choice there!

The Common Ringed Plover didn’t remain long at San Joaquin Wildlife Sanctuary. On 03-SEP-19, a disturbance on the pond the bird foraged in, flushed it and it never returned. So, sadly, this bird was with us for only a little over five days. Still, due to eBird and birding websites, many people saw it. This resulted in hundreds of happy people and lots of work for the regional reviewers! Overall, it was a wonderful bird to find and a spectacular first record for Orange County.

http://birdingnewfoundland.blogspot.com/2018/08/common-ringed-plover-in-north-american.html
“The Shorebird Guide” by O’Brien, Crossley and Karlson
“Shorebirds of the Pacific Northwest” by Paulson