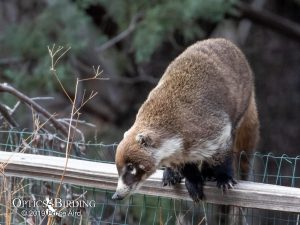 The Coati makes its entrance

On a recent birding trip to southeastern Arizona, I ran across a mammal I have long wanted to meet: the White-nosed Coatimundi, Nasua narica. Known as a coati for short, this attractive beast is a member of the raccoon family, Procyonidae, as suggested by its facial mask and faintly ringed tail. All of the world’s four coati species reside only in the Americas. Other species include the Eastern and Western Mountain Coatis, and the South American Coati. Only the White-nosed Coati occurs in the United States, where it is found from southern Arizona, across the southwest corner of New Mexico to south Texas from El Paso to the Gulf of Mexico. The White-nosed Coati?s range extends all the way through Central America into northwestern Columbia. 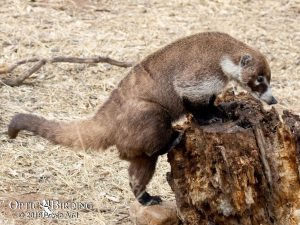 Climbing up the stump beneath the hummingbird feeder

Coatis are handsome animals, with reddish-brown fur, short legs, and a long, bushy tail that usually shows rings in the fur. The extremities are all darker brown than the body. They have a long, upturned nose that they can move around a bit. Coatis possess an acute sense of smell, mostly used for locating food. Their white-spectacled facial pattern makes them look mischievous and intelligent. That appearance is not altogether deceptive as coatis are intelligent animals, able to solve simple problems they encounter. 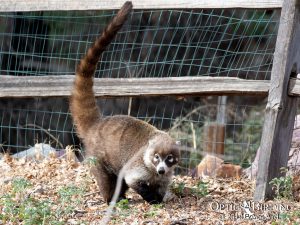 The coati approaches its favorite feeder

Coatis have significant claws that are quite capable of ripping into a rotting log or digging up food items. Additionally, coatis sport sharp teeth, so they can easily defend themselves from most threats. Coatis are also double-jointed; their ankles can rotate about 180°, which allows them to descend trees head-first! Another interesting coati fact about: they walk on the soles of their feet, just like humans. Coatis are omnivores, subsisting on a diet of ground litter, plants, bugs, small vertebrates, birds, eggs and so on. These animals range from about 13-27 inches in length with an equal length of tail. They weigh from 4.4 to 17.6 pounds, with males being up to twice the size of females. Coatis are excellent climbers and swimmers. 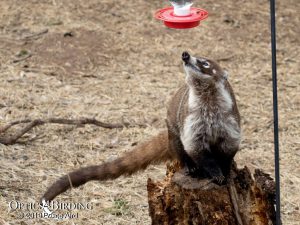 Coati with its goal within reach

Coatis also have a sweet tooth. I photographed this coati when it visited the hummingbird feeders at Santa Rita Lodge in Madera Canyon in Pima County, Arizona. It climbed over the back fence and ambled out onto the feeding ground, ignoring the many not-so-Wild Turkeys. From there, it climbed on top of a stump, and reared up to reach a low-hanging hummingbird feeder, possibly positioned specifically for its use: the lodge proprietors know a crowd-pleaser when they see one! The coati grabbed the feeder and tilted it up so the nectar ran out straight into its waiting mouth. It was a sloppy eater, with a lot of nectar dribbling down its front. It continued holding the feeder until it had drained it, whereupon it settled back down, dropped to the ground and left. Shortly after that, a lodge employee came and replaced the empty feeder with an identical one full of nectar, suggesting that this event happens frequently, and is sanctioned by the lodge. 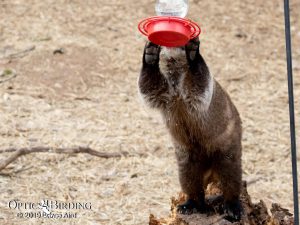 This coati has no table manners!

Coatis are mostly social animals. Females and young coatis gather in bands, sometimes of up to 30 individuals, partly for protection from predators and male coatis. Adult males are solitary, and only seek out other coatis to mate. Mating occurs during the winter, with most litters of 2-7 pups being born between January and March. The female leaves her band to give birth and wean her pups. After mating, she makes a nest in the crevice of a tree and has her litter. The mother and pups rejoin the band when the pups are 5-6 weeks old. Pups get weaned at about 4 months of age, after which they and their mother rejoin her original band. Coatis typically are diurnal animals, doing most of their foraging during the daytime. At night, they often seek a safe roost in a tree. Generally speaking, coatis prefer to roost in elevated places.