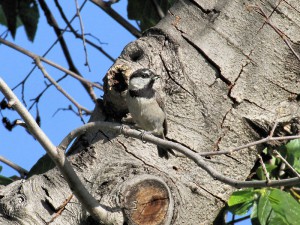 Sometimes the best birding occurs right on your doorstep. While riding my bike to work one morning, I heard the telltale song of Mountain Chickadees (Poecile gambeli). I watched one fly over my head into an alder tree beside the road. On the way home, I stopped in the same location to look for the nest I suspected was there. It didn’t take long to find. On an exposed length of trunk some 25 feet up, a fresh-looking hole with a nice, beveled edge was visible. Moments later, one of the parents followed the other to the hole, and the excited calling of the nestlings anticipating food could be heard. I went home and immediately returned with the camera. Then I sat quietly waiting for the adults to return. 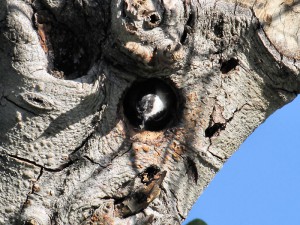 Mountain Chickadee emerging from its nest

As it turns out, this kind of action is surprisingly hard to catch! The Mountain Chickadees approach the nest cautiously, often sitting on branches outside the hole for some time. When they go to the nest itself, they enter quickly and disappear completely. I observed both adults in the nest together simultaneously and they both completely disappeared from view. They did tarry upon leaving though, often stopping with a head poking out from the cavity. Sometimes the male would vocalize in the vicinity of the nest, singing his “chickadee-dee-dee” song. The National Geographic “Field Guide to the Birds of North America” lists two sub-species of Mountain Chickadee. The narrow white supercilium and the lack of a pinkish/buffy wash to the flanks suggest that these Mountain Chickadees belong to the baileyae sub-species.

The Importance of Woodpeckers 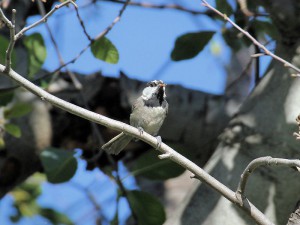 Mountain Chickadee with food in its bill

Mountain Chickadees are typically birds of higher elevation in southern California. Until recently, these birds had to be sought at a few select foothill locations or up in the mountains proper. But recently, it is now commonplace to find these birds on the coastal plain here in Orange County.

There are at least two small groups of them at opposite ends of the Serrano Creek Park that flows through my home neighborhood, but in several years of trying, I had been unable to find evidence of their breeding there, despite the fact that summer observations suggested they were now permanent residents there. The location of this nest, out of the main creek drainage and in a tree right next to houses is probably testimony to the scarcity of suitable nest cavities for them to use. This particular hole is almost certainly the work of a Nuttall’s Woodpecker, for while we do get a few Downy Woodpeckers in the creek, those never venture up into the neighborhoods, whereas I’ve had Nuttall’s drinking from my hummingbird feeders in my backyard.