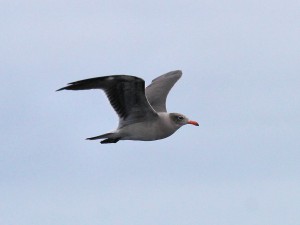 I recently took the fall pelagic birding trip out of Dana Point Harbor. Recent sightings of a Red-billed Tropicbird in the Santa Barbara Channel gave us hope. Hurricane systems south of us off the coast of Baja suggested that the fall pelagic might produce great birds. There had been greater than usual numbers of Craveri’s Murrelets in the channel. Many people were on the boat specifically looking for that species. Plus, September is the peak of Blue Whale occurrence in the channel. We knew beforehand that cetaceans rather than birds might dominate this trip. In the end, the trip met all of those expectations. Well, except for the tropicbird… Rats! 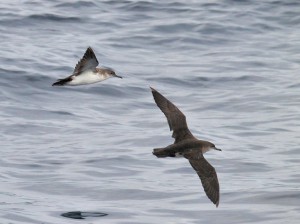 The fall pelagic trip began with close views of Black Oystercatchers feeding at the water line of the jetty. The expected gulls, terns, cormorants and pelicans perched on the breakwater or feeding over the harbor mouth. Once we left the harbor, we found the expected large flock of Black-vented Shearwaters (Puffinus opisthomelas). These small shearwaters breed in burrow nests on Guadalupe, San Benito and Natividad islands offshore from northern Baja. Black-vented Shearwaters inhabit exclusively the Pacific Ocean, almost always along the North American coast.

Black-vented Shearwaters come closer to land than most shearwater species. We frequently observe them from shore, feeding in densely packed flocks. Black-vented Shearwaters often feed above pods of dolphins or whales because the mammals drive the prey fish to the surface. We saw several pods of Common Dolphin, and Blue Whales in close proximity to masses of feeding Black-vented Shearwaters. The weather on this particular trip was mostly gray, overcast and cool. The lack of light and the distance of many of the birds made me really appreciate the impressive light-throughput and definition afforded by the 10×42 Zeiss Victory SF binoculars I was using. 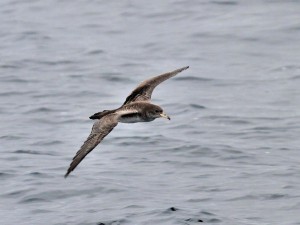 In Orange County, we often see good numbers of storm-petrels on a fall pelagic trip. Here, we usually see mostly Black Storm-Petrels (Oceanodroma melania), with a scattering of Least and Ashy Storm-Petrels. On this particular trip, we had roughly equal numbers of Black and Least Storm-Petrels (Halocyptena microsoma). Invariably, these birds stayed well away from the boat, even when tempted with offerings of fish oil from the stern. We did have about 20 Craveri’s Murrelets (Synthliboramphus craveri) and everyone got good looks at these charming little birds. 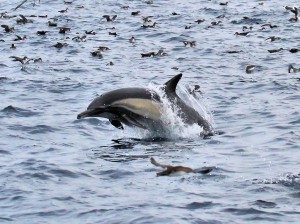 Cetaceans were the biggest stars of this trip (literally!).  We observed three whale species and two species of dolphins. Early in the trip, we encountered a fairly large pod of Common Dolphins (Delphinus capensis). Curiously, the name Common Dolphin refers to the fact that they reside in all seven of the world’s major oceans. The name doesn’t provide a commentary on their frequency. Experts divide  Common Dolphin into two varieties: the Long-beaked and Short-beaked. Of these, the Long-beaked are usually found in shallower nearshore waters. Conversely, Short-beaked Common Dolphins inhabit the deeper waters of the open ocean. Both species are small (6-8 feet) with white markings on their sides at the base of the dorsal fin.

Common Dolphins are friendly and curious, often approaching a boat, and riding the bow pressure wave with apparent joy. Common Dolphins are also quite acrobatic, and often leap completely out of the water. Shortly after leaving the dolphins, a Minke Whale appeared. Unfortunately, this one was less friendly than the one seen on the earlier spring trip. Later, we came upon a small pod of Bottlenose Dolphins (genus Tursiops). Bottlenose Dolphins are larger (7 -13 feet ), uniformly gray in color, and much less likely to breach. Recent research indicates that in the near Pacific, there are two species of bottlenose dolphins, the Common and the Indo-Pacific. As those two species are difficult to separate in the field, we aren’t calling these.

While returning, we got the biggest thrill of this fall pelagic trip: a group of feeding Blue Whales (Balaenoptera musculus). As luck had it, the whales approached the boat while feeding so we got rather close to them. We heard the explosive exhale when they spouted and watched them lunge-feed at the surface. With each lunge, they took in a massive volume of water in a single swallow. Blue Whales use their baleen filter plates to extract the krill on which they feed from the water. When lunge-feeding, the whales often turn on their sides so that the tail flukes protrude from the water. Sometimes they invert completely exposing the ventral pleats on the throat, as shown here. 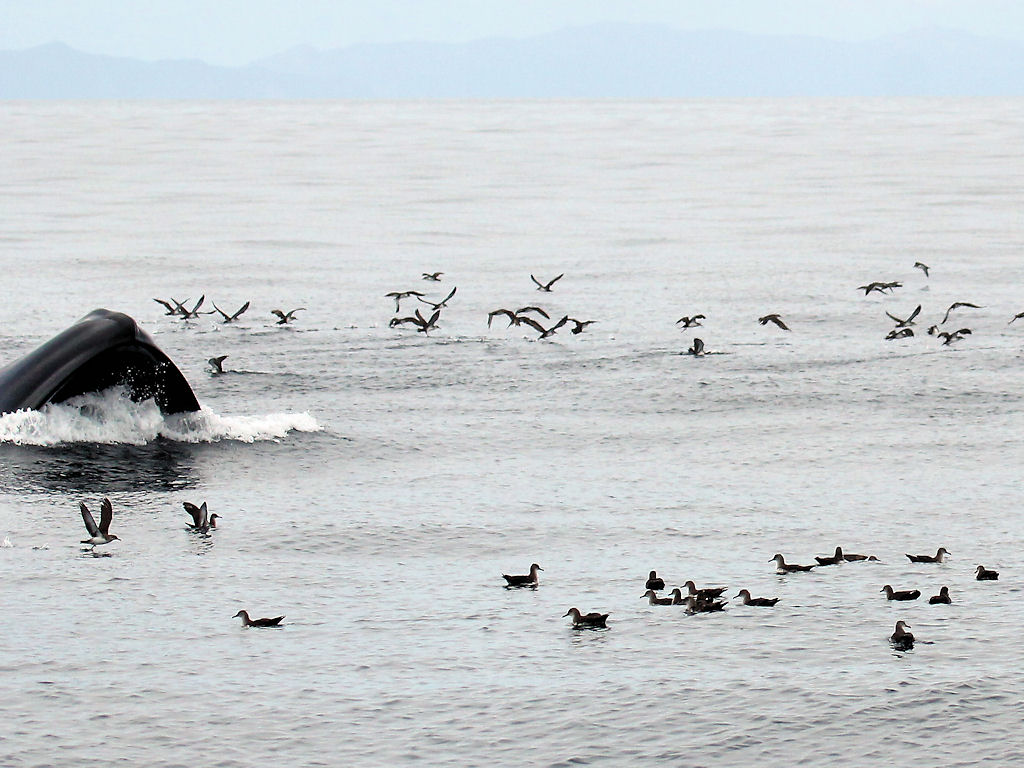 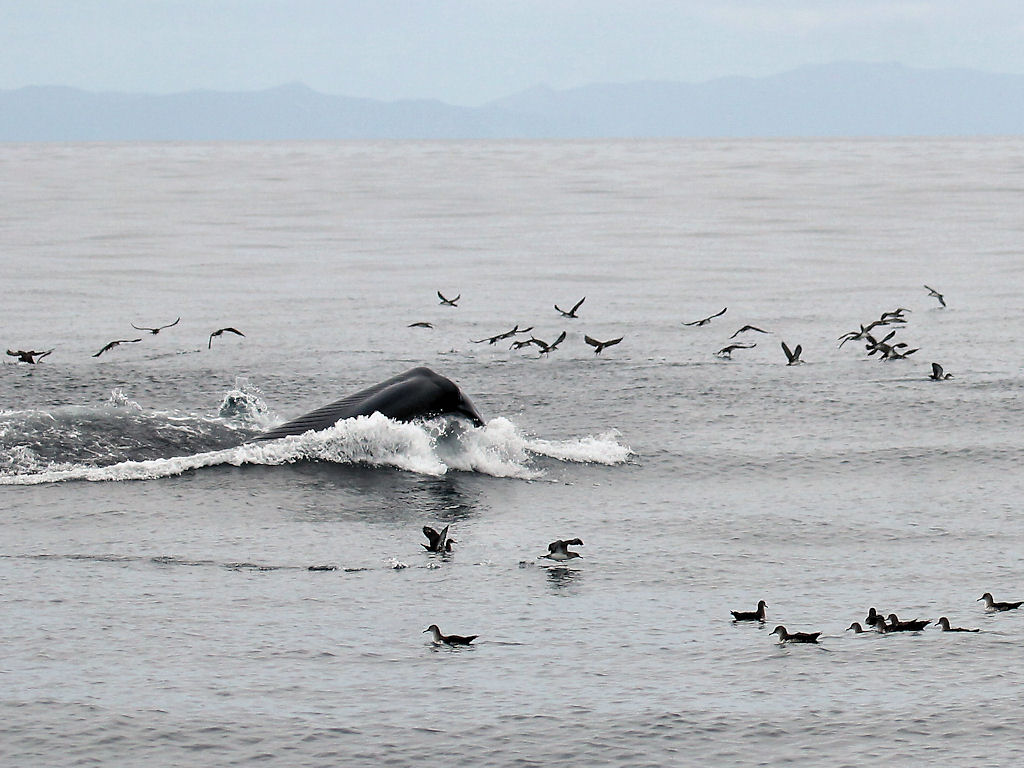 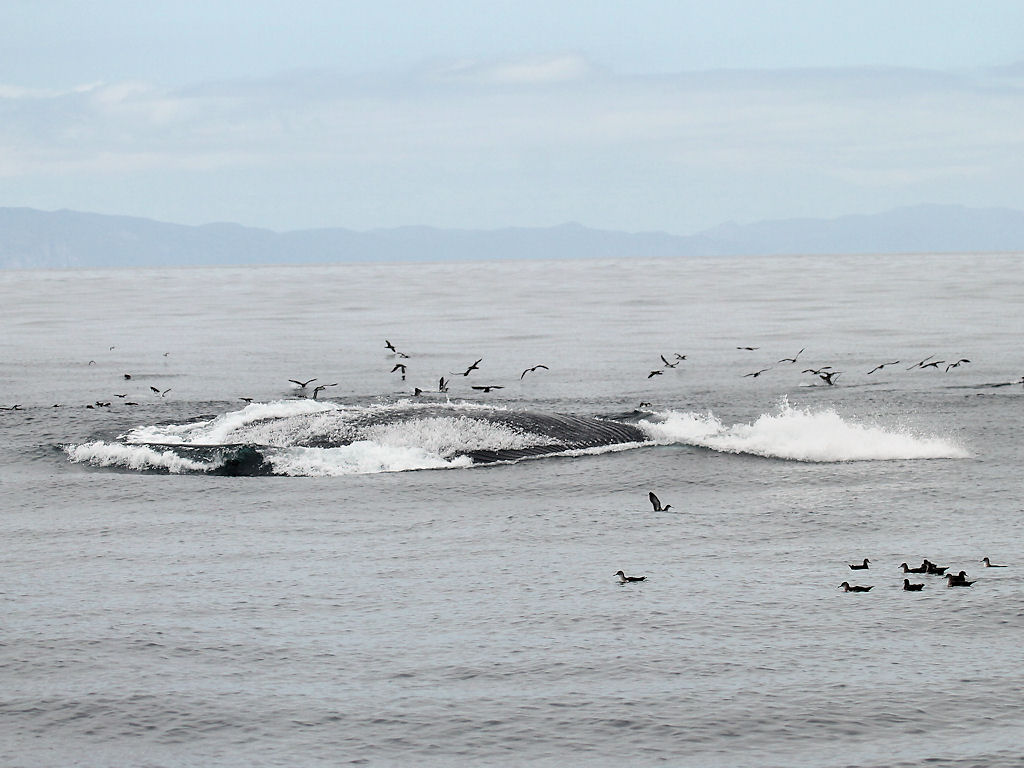