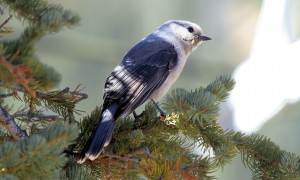 The Gray Jay ranges from east to west across the northern boreal forests of America. “Camp robbers” are what they are popularly know as. They may even fly onto someones hand or head for food.

Gray Jay is unique in appearance, relative to the other crow, jay, and magpie members of the Corvidae family. Its small black bill is the most notable difference.  This gives it the appearance of an over-sized chickadee.

The Gray Jay is medium size and fluffy. It is a pale gray jay with a light underside and no crest. All races have black eyes, feet, legs, and bill. In North America there are three readily distinguishable populations of Gray Jay. The photos here show the Rocky Mountain version or color pattern. Pacific birds have a darker head and brownish tinged backs. Taiga (northern) populations are grayer above and have a slight grayish belly. There are eleven races within these three color forms.

In North America there are 17 typical or breading members in the Corvidae family. Gray Jay is however the only member of the Perisoreus genus that is present here. Two other members of this genus exist worldwide. The Sichuan Jay which is endemic to China. The Siberian Jay is endemic to northern Eurasia. All three members of the genus live year round on permanent territories, in coniferous forests, and store reserves of food for the winter. 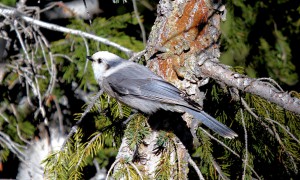 The Gray Jay is also known as “whiskey jack” because of his mischievous character.

Gray Jays are fairly intelligent. They are extremely tame around people. “Camp robbers” is their popular name. This is because of their propensity to steal food at people’s camp sites, even right off their plates. Sometimes they will even fly up to and land on a person’s hands or head for a handout. Their “robber” habits further extend to the other birds, other Gray Jays, and various larger wildlife.

The diet of the Gray Jay is exceptionally tolerant to a variety of foods. Their primary diet consists of arthropods, berries, carrion, seeds, fungi, and fruits such as chokecherry. Known to also commonly raid the nests of other birds or bats for nestlings, snap up flying insects in the air, wade in shallow water to capture invertebrates or amphibians, kill small mammals, and will even pursue small birds like chickadees and warblers. They may land on larger animals to eat blood gorged ticks and steal game from traps. They are deceptively cute in appearance. Combine this with an extremely intrepid behavior. These antics have also earned the Gray Jay the name of whiskey jack, the notorious lumber raftsman of 19th century folklore legend.

They often store the food they collect for later consumption during the long winter when food is scarce or not available. Gray Jays cash large quantities of food by rolling their food in their mouth into a rounded mass (bolus) and coat it with a sticky saliva. They then stick this food mass into bark crevices and onto tree branches. They may create as many as a thousand of these caches in a single day. Their genus name, Perisoreus, means hoarder with its etymology derived from the ancient Greek word perisoreúo, “I heap up all around”. 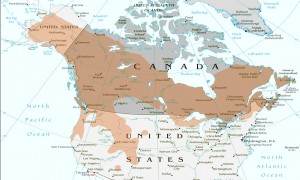 The Gray Jay’s range stretches across the boreal forests of North America.

Gray Jays mostly live in the northern boreal and subalpineforests. 80 percent of the population is found in Canada while only 20 percent lives in the US. Their east-west range stretches from Alaska in the west to Newfoundland in eastern Canada. Their range also extends southward into the US along the Rocky Mountains, down the west coast to California, and in the northern Midwest and north-eastern states. In general they live strictly in remote forests. Humans do not seem to bother the jays although once an area becomes a permanent settlement, the Gray Jays move out and deeper into their forested habitat. 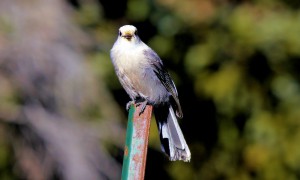 This Gray Jay was seemingly not bothered being approached by people as he sat on his post in the sunlight at over 10,000 feet in elevation.

Gray Jay breeds very early in the season, February and March, when temperatures may fall below -20° F. In fact, many of the other migrating birds have not even arrived much less started mating when the Gray Jays have already begun nesting in March and April. At this time of year inclement weather and storms are still very possible. Females on nests may even be seen partially buried in snow after a storm. Gray Jays will not breed more than once in a single season even in the event of a nest failure.

Usually Gray Jays breed in their second year of life. They typically mate for life except in the case where one of the pair dies. In this case the surviving member will find another mate. Interestingly, Gray Jays breed as a cooperative effort most often with a third member serving as a “helper” in feeding of the young after fledging and defending the breeding pair’s territory. The third “helper” member also assists in guarding the nest by mobbing potential predators. This third member is most often the dominant sibling of the previous season.

They build their nests in mature coniferous trees. Both adults construct the nest close to the tree trunk. Their construction materials consist of twigs, strips of bark and lichen. It is held together with caterpillar webbing, and lined with feathers or fur. First of all, the male starts the construction. The female progressively becomes more involved as the nest evolves.

Juvenile Gray Jays have a sooty gray plumage. In the beginning, after fledging, the young stick together as a family group. They form a cohesive group. They travel through the forest together. In cold weather they will huddle together to keep warm in cold weather. At about five weeks out of the nest though they will begin to fight amongst each other until a dominant juvenile expels the rest of his siblings out of the natal territory. The dominant juvenile remains with his parents on the natal territory into the following winter. This juvenile is often referred to as the “stayer” while his expelled siblings are called the “leavers”.

The young Gray Jay leavers will attempt to find an unattached breeding pair to team up will as their helper member. In reality most of these juveniles are unsuccessful and studies show that about 85% of them will die by fall. Differing from this, about 50% of the stayers remaining with their parents will survive.