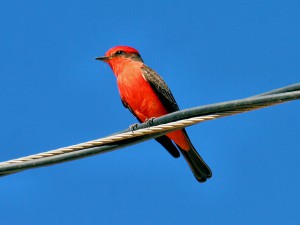 In the United States, we find Vermilion Flycatchers mostly in the desert southwest, where their range extends to southern Nevada.  Their California range includes much of the Mojave Desert, in San Bernardino County. Additionally, it extends across most of Riverside and Imperial Counties and into Los Angeles, Orange and San Diego counties. In coastal California, we see Vermilion Flycatchers increasingly often though more likely as winter visitors. However, their range is expanding and there are indications that their breeding range is expanding towards the coast. Here in Orange County, Vermilion Flycatchers often use edge habitat like golf courses and athletic fields. 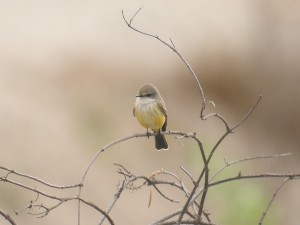 Generally, identification of Vermilion Flycatchers is simple, particularly with adult males. Their brilliant red crown, chest and belly contrasting with black face mask, nape and upper parts, is unmistakable. Observers appreciate the subtle beauty of female Vermilion Flycatchers, with their grayish-brown upper parts and white throat and upper chest. Further, the face pattern shows a darker cheek patch (auriculars) and lores beneath a bright white supercilium. The belly coloration varies from orange-yellow to almost a salmon color, with indistinct vertical streaking on the upper chest. The only possible ID confusion would be with the larger and darker Say’s Phoebe (Sayornis saya). But that species has a grayish throat and a distinctly pumpkin shade to the lower belly coloration.

Vermilion Flycatchers are classic sally-hunting insectivores, often sitting right out in the open on whatever perch they are using. Usually, they use fence posts or small trees to hunt from, returning to the same perch after each flight. The Vermilion Flycatcher’s small size translates into great maneuverability. Consequently, the hunting flights can be spectacularly acrobatic, so they are great fun to watch. Currently, conservationists consider the Vermilion Flycatcher a species of “least concern”. The photos and video were taken with a point-and-shoot digital camera attached to a Kowa TSN-883 spotting scope with a Kowa TE-11WZ 25-60x Zoom Eyepiece using  Sayegh Digidapter for Kowa TE-10Z and TE-11WZ. 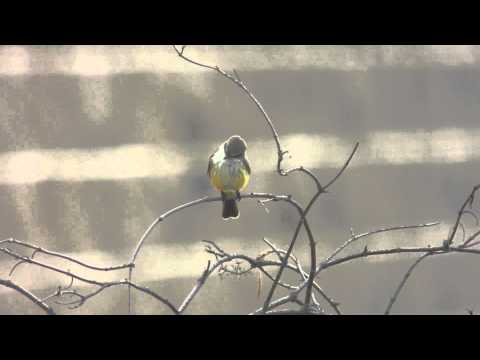