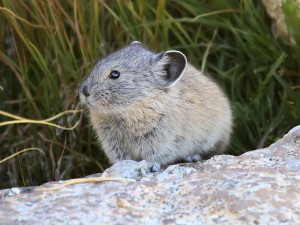 On a quest for the American Pika (referred to below as just Pika) we recently hiked above the tree line into the alpine zone of the Sierra Nevada Mountains. We chose the high elevation region near Conness Lakes just outside Yosemite National Park for our search. Our arduous hike to almost 11,000 feet was rewarded with the bustling activity of the Pika (Ochotona princeps), preparing for the rapidly approaching winter months.

Pika are most active during the fall while gathering their winter food supply before snowfall. With this consideration we chose late September for our excursion. Since they don’t hibernate the supplies the Pika gather must hold them over until spring. It seemed a very unique adaptation for a small alpine mammal species to neither migrate downslope nor hibernate.

Despite their cuddly appearance, the Pika is one of the few mammals in the lower 48 that is tough enough to survive this harsh no-man’s-land above the tree line. The Pika is a furry, potato sized (~6 in.) herbivore that lives in the western mountains of the US and Canada. It makes its home along rocky mountain slides in high elevations from 8,000 to 13,000 feet.

Although the Pika looks a bit like a small guinea pig, it is actually closely related to the rabbit. This distinguishes it from the rodents that are in the order Rodentia, which contains fully 50% of all living mammal species. With round bodies, prominent ears and no visible tail Pika tip the scales at about 5 ounces. This makes the Pika also the smallest member of the rabbit family.

Foraging and Food of the Pika 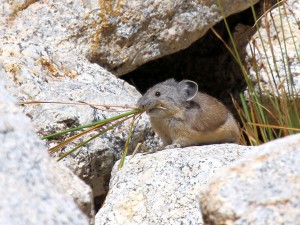 These small, energetic mammals feed on the grasses, flowers, and tall weeds that grow in their high elevation habitat. During the summer months when there is no snow cover, Pika also busily collect additional food for their upcoming winter supply. This activity is quite methodically done. The Pika create what are called haypiles: collections of vegetation that they stack out in the sun to dry. This way when the Pika bring these reserves into their dens for winter storage the collected vegetation won’t grow molds or rot during the winter. These stores of food have to be significant for them to survive the winter. We are talking about a whole bathtub full of dried food. They also protect their food collections from would-be Pika thieves! They protectively guard their stash and can be heard issuing a sharp high-pitched chirp warning if another Pika gets any ideas.

Pika live in loosely associated colonies, but within those, they are very territorial over their den and foraging areas. Except for breeding, Pika are generally solitary animals, and they use a range of vocalizations to define and protect their territory. The colonial aspect of their lives confers one big advantage: predator detection and notification. Since Pika are vulnerable to predators such as weasels, hawks and coyotes the colony has an ever watchful eye for predators and warning vocalizations in the event of ones arrival. Not only do the Pika have distinct alarm calls but they are specific to the predator. Since the Pika’s home is in rock piles and slides it must venture out into the open to collect food making it vulnerable to its predators. 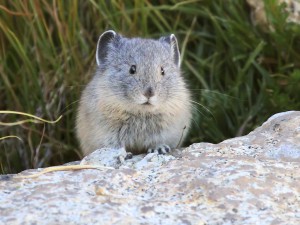 In early to late spring before the snow begins to melt the Pika breed. Breeding pairs generally have adjacent territories. After a gestation period of 25 to 30 days, the young are born. The female gives birth to two to four babies. At birth the babies are blind and don’t open their eyes for about nine days. The young leave their mothers’ care after about four weeks although they won’t reach adult size for another three months. This is when the Pika are most vulnerable. The young must find their own territory and collect enough food to survive the upcoming winter. The mother will breed again when the young are gone. Lactation significantly reduces the mother’s fat reserve and she will only raise the second litter if the first litter does not survive.

There is a considerable conservation concern for this species. Pika are finely adapted to the high-elevation alpine zones, which leaves them extreamly vulnerable to the effects of global warming. They are very sensitive to warmer temperatures, and can die in as little as 6 hours of exposure to temperatures above 78°F. Other mammals will move their range as temperatures increase. At the top there is nowhere else to go.

Cold fronts in the winter also pose threats to the Pika. Global warming reduces the insulating snow cover which protects the Pika in their winter den from temperature extremes. Significant decline of the snowpack has already been observed in the Pacific Northwest, the Southern Rockies and the Sierra Nevada. In the Great Basin, Pika have already disappeared in 8 of 25 documented locations.

Next is the invasion of lower elevation plant species which displace the alpine vegetation and decrease the Pika’s available food. New sets of predators also follow. These factors combined make the Pika potentially the first mammal species that faces extinction directly as a consequence of climate change. 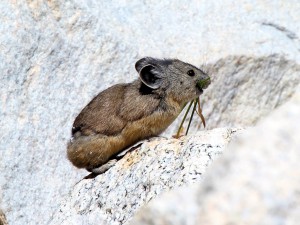 In August 2011, the Center for Biological Diversity (CBD) petitioned the state of California to list the five California Pika subspecies as endangered under the California Endangered Species Act, but in May of 2013, the state voted not to protect them in part because of cost. CBD also petitioned the U.S. Fish and Wildlife Service to list the full species as federally endangered, although in 2010 the Fish and Wildlife Service declared it would not protect the whole species. Pika have already disappeared from more than 1/3 of their previously known habitat in Oregon and Nevada.

It is a privilege to have had the opportunity to spend time with and photograph this charismatic little animal. Trapped at the top alpine wildlife is extremely vulnerable to man’s activities. We can only hope that the Pika is not going to be the poster child for mammal species going extinct because of global warming.