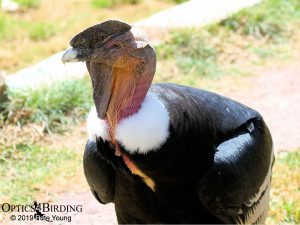 While every corner of the globe brings its own plethora of bird species to the table, few countries attract such attention as Peru. Second only to Columbia in the sheer number of species, Peru’s vast array of climates house species from all areas of the birding spectrum. Perhaps the most intriguing species in the nation is the Andean Condor.

Heavier than all other flying birds and second only in wingspan to the Wandering Albatross, this giant scavenger has always struck awe in the entire birding community. I am certainly no exception, and I finally got to see some myself in August of 2018.

What do you usually hear when people talk about their trip Peru? Machu Picchu? The food? The enlightenment they felt when trying out alpaca sweaters? I certainly can’t bash those aspects of the Peruvian experience, but they all fall far lower on the totem pole than the region’s wildlife.

One of the best places to showcase the nation’s animals is the Cochahuasi Animal Sanctuary. It consists entirely of rescued Andean animals that would not survive in the wild. Some of the animals recover enough to be released, but others remain there for their entire lives. Rehabilitation centers such as this are crucial to fighting species endangerment. 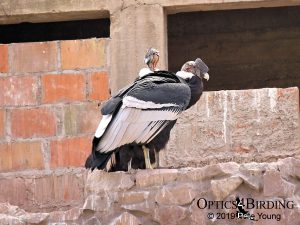 The most stunning exhibit at the sanctuary is the interactive Andean Condor enclosure. (Don’t worry, I saw some in the wild too. We’ll get there.) The cage houses many of these birds that have lived there long enough to acclimate themselves to human contact. Guests are free to roam in the enclosure and nearly touch the condors.

The most fascinating spectacle took place when they flew directly over me, almost knocking me over! Reading about males reaching fifteen kilograms and having nine-foot wingspans is impressive. However, I acquired a completely new appreciation for the Andean Condor’s size when I felt the gust of wind as they soared right over me. Needless to say, California petting zoos are bit more dull after this trip.

Failing to see the bird for which I had traveled to Peru would have been a living nightmare. I heard too many horror stories of birders coming to Peru without spotting an Andean Condor in the wild. I feared I would join that bunch on my way to Colca Canyon.

This 3,270-meter deep canyon of the Colca River is located in Peru’s southwestern department, Arequipa. The region is famous for its volcanic formations, and it houses some of the best spots for catching a glimpse of an Andean Condor. To maximize our chances, we spent the night in Chivay, a small town at the gateway of the canyon. 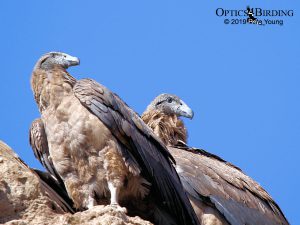 Now, if you are anything like me, getting up at 5am feels like cruel and unusual punishment to you. The best motivator? Hearing the locals say that you can spot Andean Condors at a viewpoint just 26 miles away!

The drive up the canyon road (AR-109) to Mirador Cruz del Cóndor was only about an hour, but I would have driven all day for the reward I got in the end. While our guide reminded us not to get our hopes up while we were en route, we were fortunate enough to spot seven Andean Condors upon arriving!

A real treat (which we missed out on at Cochahuasi Sanctuary) was the group of juveniles perching on a rock formation. They were certainly a nice addition to the trip. Adults only lay an egg (sometimes two) every two or three years, and they are monogamous. On top of that, juveniles aren’t able to fly until they are six months old, and they leave their parents’ care at about two years. This results in a limited window for observing juvenile Andean Condors alongside their parents while they are able to fly.

The Crown Jewel Of The Trip 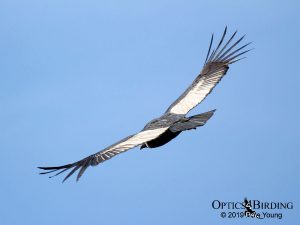 Lovely as it was to see the young ones, the highlight of the expedition was observing the adults in flight.

The Mirador Cruz del Cóndor vista point overlooks  one of the deepest parts of the Colca Canyon. This makes it an ideal place for hungry Andean Condors to scout for food. Strong canyon winds allow these birds to fly effortlessly for extended periods of time. With the amount of weight they are carrying, they need all the help they can get.

The adult female pictured on above  must have hovered overhead for the better part of an hour before departing from the viewpoint. I am certainly thankful that she did not mistake us for carrion. That would have made for a very different (albeit thrilling) article. 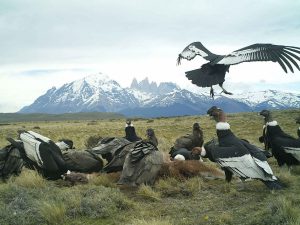 There are several factors that have affected the bird’s conservation status, eventually leading to their placement on the Endangered Species List in 1970. As of now, they are classified as a Near Threatened Species by the International Union for Conservation of Nature.

The survival of the species is critical for both the natural ecosystem and humans. The amount of carrion they consume plays a huge role in preventing the spread of disease. They eliminate many potential breeding grounds for deadly bacteria like botulism and that which causes anthrax.

Us nature lovers view the Andean Condor almost as an eighth wonder of the world. The Incas took it a step further, deifying it as a messenger to the heavens. Unfortunately, there are some that view it as a commodity, a nuisance, and a source of entertainment.

Who Views Them As A Commodity? 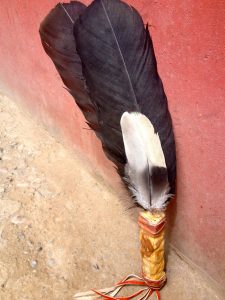 Another adverse effect on the Andean Condor population is the belief that their body parts have medicinal properties. Shamanic healing practices are obviously quite far removed from modern medicine that we are all used to. Shamans in the region wave these feather fans over the ill to expel negative energy. This practice is said to infuse the subject with healing energy. Of the healing practices described to me by the experts at Cochahuasi Animal Sanctuary, this one is the least invasive to the bird.

But healing more life-threatening ailments requires much more harm to the Andean Condor. Namely, consuming the birds’ eyes is thought to restore eyesight in the blind. More harmful yet is the practice of eating the stomach, a way some shamans claim to have cured cancer.

Who Views Them As A Nuisance?

A (deadly) misconception among some farmers and ranchers in the Andes is that the Andean Condor poses a threat to their livestock. On the contrary, they actually help the farmers, ridding them of carrion that attracts other pests. The online time an Andean Condor will ever attach a live animal is when carrion is scarce. At that, they would never try to take down large mammals, only small mammals and birds. This tragedy has led to the unlawful harm and killing of many Andean Condors. In some cases, livestock carcasses have been poisoned by farmers to prevent their unwanted avian guests from returning.

Who Views Them As A Source Of Entertainment? 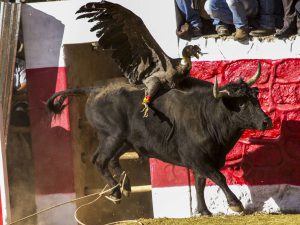 The cruelest practice involving the Andean Condor is a tradition that dates back nearly 200 years. It takes place every year at the Yawar Fiesta following the celebration of Peruvian Independence. It involves strapping a captured Andean Condor to the back of a bull which is then engaged by bullfighters.

The duel that ensues symbolizes the history of the region. The Andean Condor’s triumph over the bull represents the Inca nation’s liberation from the Spanish. While it may empower the audience by illustrating their roots, it is a nightmare for any conservationist.

How Can You Help The Andean Condor?

Undoubtedly, the Andean Condor population faces many threats. The ones I have listed are only a small piece of the pie. Like all species, these birds face the struggles of climate change with ever increasing severity. It may seem like we are ill-equipped to help a species all the way down in the southern hemisphere, but you can do more than you probably think. 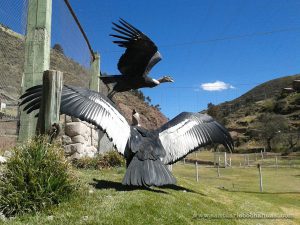 With the power of the internet, making a difference for animals across the globe is a quick process! To support Cochahuasi Animal Sanctuary, visit their website  and give what you can! Doing so strengthens their efforts to rescue and rehabilitate Andean Condors and other threatened Andean species. Of course, if you ever find yourself in Cusco, make sure you put a visit to the sanctuary on your itinerary. Dare I say this exhibit was more exciting than Machu Picchu?

Most of you are probably more familiar with the California Condor than its Andean relative. You may also know about the San Diego Zoo’s California Condor Recovery Program. Without it, they would have gone extinct. One key to the program’s success is actually (you guessed it!) the Andean Condor! The zoo had its first one in captivity in 1929. Its behavior was studied in great detail, providing insight that was later used to save its California cousin.

A similar program started for the Andean Condor itself in the late 1980s, as its population in the Northern Andes had become critically small. Efforts like this are some of our best weapons for fighting species endangerment. The San Diego Zoo Global Wildlife Conservancy does wonders like this for many more endangered animals. You can become a part of that effort by visiting their website.