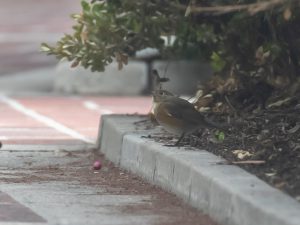 When word broke on a Monday of a Red-flanked Bluetail found at the William Andrews Clark Library, it caused a panic. We scrambled for our field guides to see what one even looked like, and then looked up the library hours of operation. The news wasn?t good: the facility only opened during the week when most of us are working instead of birding. This whole working-for-a-living thing really puts a damper on birding! We spent an anguished week watching the reports verifying the bird was still present. Fortunately, the bird hung around, so we drove to Los Angeles to chase it. A crowd of about 100 local birders milled around by the library gate, mixing with visitors from further afield. Promptly at 9:00 am, the gates opened and people started speed-walking towards the opposite end of the property. The grounds were beautiful: lush, with mature lawns, dense hedges, and concrete walkways shaded by huge ficus and magnolia trees.

Red-flanked Bluetails are skulkers: they hide in dense cover or sit in the shadows. If this female bird’s behavior typical, Bluetails hate being in the open and seldom linger there for long. While they usually stay close to the ground, Bluetails will also perch high, usually remaining nearly motionless. Occasionally, they give a soft call – a brief, quiet, musical phrase, up-slurred in pitch. The call is virtually useless for locating the bird, but it at least provides confirmation that it?s still around. We spent a frustrating hour as the bird appeared sporadically, flying around, rarely lingering anywhere, and always staying deep in shadow. One thing was for sure: these disappointing views made the assembled crowd crazy!

What’s All The Fuss About? 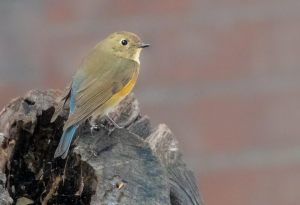 Why do birders go crazy over a bird like this? Red-flanked Bluetail is an Asian bird, a member of an Old World family, Musicapidae. This family also includes the Wheatears, the Siberian Rubythroat, and the Bluethroat. U.S. birders, seldom see these gorgeous birds on the continent. Red-flanked Bluetail is a casual, annual visitor to the islands off Alaska, so they’re not accessible to most people. California boasted just two previous records, both from places closed to the public. That fueled the madness: this was the first Bluetail that people could go see.

A wintering Sharp-shinned Hawk, sitting quietly in a Ficus tree worried many birders. When the raptor made a move in the Bluetail’s, several birders cried out in dismay. Fortunately, that incipient tragedy never took place – the accipiter was just relocating, and the motionless Bluetail was invisible to it.

We camped out on the long alleys overlooking a few select spots that the bird favored. Every now and then, people would spot a Hermit Thrush and rush off to see it! The thrush is a bird that winters in every park and green space in the southern half of the state! It would have been comical if it weren?t for all the angst? Eventually, the bird settled in one spot for several minutes – in the shade, of course! This allowed long-range shots of it from 100 feet away – better than nothing! 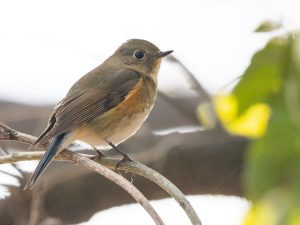 Another Carl Jackson shot of this gorgeous bird

After discovery of this rarity, the library extended their hours to accommodate people, even opening on a Sunday! So we went back to see this mega-rarity again. The Bluetail didn’t disappoint, though it did startle everyone. Someone saw it fly in from off the property high into a huge ficus and promptly disappear. Hushed whispers of “Was that it?” broke out as people gathered underneath. Eventually someone found it again. Thirty minutes later it was still in the same spot. Most people saw distant views of the bird’s belly, partly obscured by a large branch. This bird exemplified a situation where digiscoping really came into its own as a technique. For the most part, cameras with long lenses yielded unsatisfactory shots of this bird. But even disappointing as parts of this experience were, there was still that glow that follows a successful chase of a life bird. It’s January, and we have a new one in the bag. How can you be anything but optimistic? 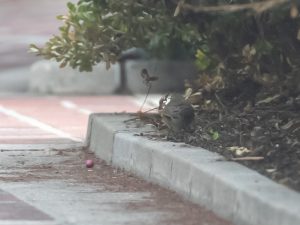 This bird remained at the William Clark Library for months. Sharp-eyed viewers may note the vast quality difference of the photos featured in this post. The explanation is one that most birders who photograph birds will understand. Carl Jackson took his excellent photos about a month ago, when there were only about 7 people at the library searching for the Bluetail. Under those circumstances, perhaps it wasn’t quite as shy. We took the other photos with 70-100 people rushing around talking, making noise, etc. In the end, views of the bird were infrequently as good as Carl’s shots show. But if you want shots like Carl’s you need to be very good with a camera, and in his own words “Very lucky!” Allowing for the fact that Carl is a superb photographer, extremely patient, (and quite modest), while the rest of us may sometimes get views like that, typically we seldom get shots like that!