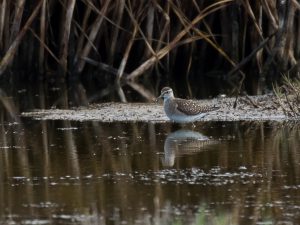 First view of the Wood Sandpiper

Recently, a report of a Wood Sandpiper (Tringa glareola) up in southern Humboldt County, California, sent our pulse jumping. The Wood Sandpiper is a Eurasian shorebird, related to our Solitary Sandpiper. There are comparatively few records of this bird for North America. Wood Sandpipers stray as far as New York occasionally, though most records come from Alaska. This bird is rare enough that some North American field guides don’t even illustrate it. When the photos came through, confirming the bird, we put together a whirlwind trip to go see it. It was a 12-hour drive to the Russ Ranch Wetlands where the bird was, so we set off the night before and drove through the night to reach the marsh the next morning.

How does one capture that feeling of anticipation, anxiety and wild hope that accompanies a chase like this? We got there after that long drive to find cars parked haphazardly all over the narrow coastal road. It seemed like it took hours to mount the scope on the tripod, and don the camera and binoculars? As we walked out, we met people returning from having seen the Wood Sandpiper, and we calmed down a bit. Still we didn’t really relax until we saw the bird poking around through the reeds. 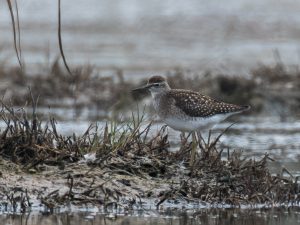 Close-up view of the Wood Sandpiper

The initial views of the Wood Sandpiper were disappointing. Then we noticed we could actually go around the west side of the marsh on the beach and maybe have a better view. We walked around, and  relocated the bird from that angle. This gave us better views from quite a bit closer. Compared to a Solitary Sandpiper, Wood Sandpiper has dull yellow legs instead of greenish and a less pronounced fleshy eye ring. One prominent feature of a Wood Sandpiper is the bold white supercilium. This extends to  behind the eye, where a Solitary has no white. Otherwise, the two species are quite similar. This bird was a juvenile, as expected for a fall vagrant. As such, it showed quite a bit more streaking further down on the chest than a Solitary Sandpiper would show. 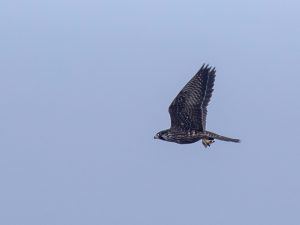 Peregrine Falcon with phalarope in talons

We noted that this was a perilous place to be a shorebird! An American Kestrel, a Red-shouldered Hawk and a Red-tailed Hawk all patrolled the marsh. None of those presented much of a threat to a shorebird, but the Northern Harrier cruising low over the reeds did. The pair of Peregrine Falcons definitely did! While we watched, the male Peregrine made a low pass over the marsh and flushed a flock of 40 or so Red-necked Phalaropes. A quick chase ensued. We watched the falcon bunch its talons into a fist and literally punch a phalarope out of the air. The phalarope spiraled limply down to the ground. The falcon grabbed it in an instant and administered a killing bite just below the skull. Immediately, the female Peregrine pounced on him, demanding his kill. We last saw her in hot pursuit of him, vanishing from view incredibly rapidly. 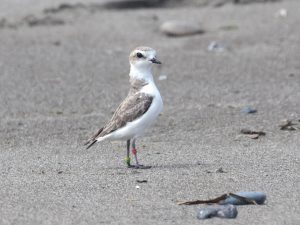 A banded Snowy Plover on the beach

We walked up over the berm of sand and grasses until we reached the water’s edge, just to see what was there. A few Brown Pelicans passed offshore, and large numbers of Red-throated Loons flew by in a steady stream. The usual collection of western gull species assembled in small groups on the beach, mostly Western Gulls, with a few California Gulls and a Glaucous-winged or two. A Caspian Tern was nestling in amongst those. Offshore, a distant Common Murre bobbed casually on the rough waters. But then movement right under our feet startled us. A quick search revealed a single Western Snowy Plover that turned out to be banded. We later checked the band code with the west coast database. This bird was born and banded in Oregon earlier that summer. 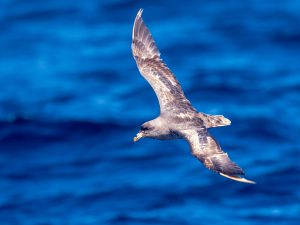 On the way home, we stopped in Bodega Bay to take a pelagic trip out to the famous Cordell Banks. This proved to be quite an adventure. On the day of the trip, there were 10-15 foot waves coming from the northwest, a 6-8 foot swell coming from the southwest and 25-30 knot winds gusting all day. We ended up with aching hips from banging them on the ship’s railing all day long! But what a trip! We had Northern Fulmars and five species of shearwater: Pink-footed, Sooty, Buller’s, Flesh-footed and Manx. We saw Ashy and Fork-tailed Storm-Petrels, many Black-footed Albatrosses, and Pomarine and Long-tailed Jaegers. 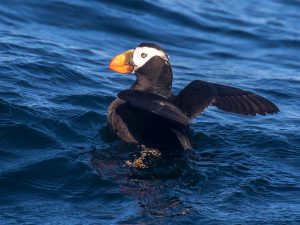 The alcids were great too. We saw Common Murres, Rhinoceros, Cassin’s Auklets, two Guadalupe Murrelets and a gorgeous Tufted Puffin. Unlike many pelagic trips that have long hours with few birds, there were always birds in view. It was difficult to avoid Avoiding getting tossed into the ocean while looking at them was the hard part! After that, it was a relief to settle into the car seat for the long drive home. Our thanks go to the Redwood Region Ornithological Society https://www.rros.org/ for putting on this fabulous trip.