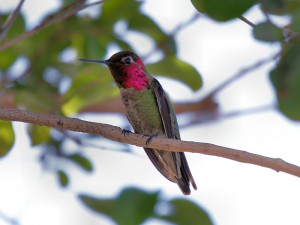 Anna’s was the easiest  to find. This simply required me to walk out in front of our store and take a picture. We often take this species for granted here in Southern California because it is so common. The Anna’s Hummingbird is unique. You can only find these on the west coast. The mature male’s (photo) throat and head become flaming red and it is very striking. Although not overly noticeable in movements or population changes the Anna’s does have some migratory travels. Most of our local Anna’s seem to be resident here year round. The photo on the left is our “Optics4Birding binocular test” since he stays in front of our store and we show customers the differences in optic quality looking at him. He is very accommodating… except with the other hummingbirds who want to eat at his feeder!

The Black-chinned Hummingbird in Southern California is the last of the breeding hummingbirds. It is a very migratory species. Few people see this hummingbird during the winter in California. Although his beautiful iridescent purple band below his black throat is often not apparent when he flashes this throat band he really stands out (as seen in the photo below). Black-chinned is a common breeding bird here and fairly widespread along coastal California in riparian areas of the lowlands and low mountains. The photos below were taken at Thomas F. Riley Wilderness Park. 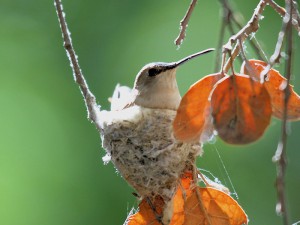 As one addition to the hummingbirds I have added a photo of a female on a nest. The photo on the left is deceptive as to how small this nest is. These birds are so tiny and their nest is so small that it is really easy to miss. I took this photo in Silverado Canyon. It was just a coincidence that I happened to spot this female on the nest. The only reason I saw the well hidden nest was that she flew in and landed on it.

Very difficult to be certain of the species but it was a pleasure to run across since I was specifically there to look for hummingbirds. In conclusion to photographing our six species of hummingbirds (Allen’s, Anna’s, Black-chinned, Calliope, Costa’s, and Rufous) that occur here in Southern California, I am reminded how beautiful nature is if you spend the time to look closely.