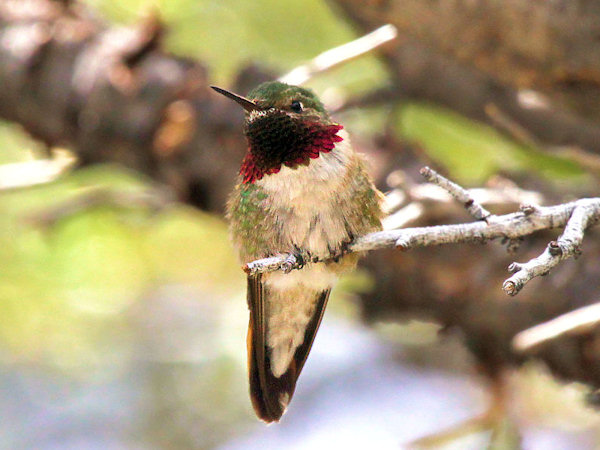 In our recent series of posts about breeding California hummingbirds Broad-tailed Hummingbird is the final species. It is also the most difficult to find. Although he is the most common breeding hummingbird in the Rocky Mountains, here in our Sierra Nevada Mountains he is much less frequent. After an unsuccessful trip into our mountains to search for this bird over Memorial Day weekend I finally decided to head across into Nevada to hopefully find it with, supposedly, greater ease.

Hiking in the mountains at 8,000+ feet made this bird anything but easy. My illusion that I could just go to where he had been reported two weeks ago and find him on a branch waiting for me to take his picture was definitely overly optimistic. After two days of hiking up and down the trails around Mt Charleston the little gem above was quite a reward. The loud whistle of his wing beats made him very apparent when he was around.

The male Broad-tailed Hummingbird is visually distinctive. He has a rose red gorget contrasting against his white chest. He is different from our Anna’s Hummingbird in his gorget color and in his green forehead (adult male Anna’s entire head and throat are red). The male Broad-tailed Hummingbird also has just a light wash of grey/green along his flanks. From his back (photo) he is brilliant green. His long tail feathers extend well beyond his wing tips. There is some variable rufous edging on his tail feathers that was also distinctive.

There was also a female present. I will have to post photos of her on my next encounter with this beautiful hummingbird. I think I’ll try this in Colorado next time.