The Variegated Meadowhawk (Sympetrum corruptum) is a large North American dragonfly. Typically, Variegated Meadowhawks range across Canada from British Columbia to Ontario, and most of the U.S. from California to Florida. Averaging 1.5 – 2 inches in length with a wingspan of 2.5 – 3 inches, scientists classify Variegated Meadowhawks as medium-sized dragonflies. These highly migratory dragonflies sometimes turn up on Caribbean Islands and even in eastern Asia. Typically, they often cruise over dry land as often as in the vicinity of ponds and streams. Variegated Meadowhawks are “sally hunters”. That means they launch on feeding sorties, and return to the same spot, much like a Western Wood-Pewee. Thus, sally-hunting makes these dragonflies much easier to photograph than many subjects. And well worth it. 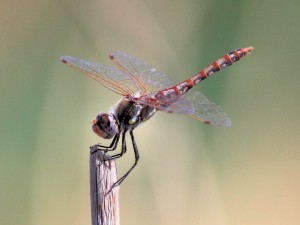 Perhaps entomologists should rename this dragonfly the “Variable Meadowhawk”.  Thus, the most consistent feature shown by Variegated Meadowhawk is the wide variety of patterns they exhibit. Tim Manolis, in his classic book Dragonflies and Damselflies of California, says that their “coloration varies greatly with age, sex and perhaps temperature”! In other words, the most consistent feature of Variegated Meadowhawks is their lack of consistency. A row of half-moon shaped ovals along the abdominal segments is perhaps the best single identifying feature. Both diagonal stripes on the thorax terminate on the lower end with a spot of bright yellow. All dragonflies front wings possess a pterostigma, a dot of color fronting the outer wings. Typically, Variegated Meadowhawks show a bi-colored, pterostigma with a dark center flanked by reddish, orange or yellow.

The eyes are particularly beautiful, pearly gray below with dark spots, grading into rust red above. Above the face plate sits a subtle little blob called the vertex. Usually, males show a bright red vertex, but in females, it is yellowish orange. Most of the time, females show brick red veins of the leading edge of the front wings. Usually, in males, these veins flash bright scarlet though some males sport bright yellow ones. Finally, the off-white colored face plates of females contrast with their yellow-orange accents, while those of males are marked mostly red. Everywhere you look on a Variegated Meadowhawk is color and pattern – they are simply beautiful! 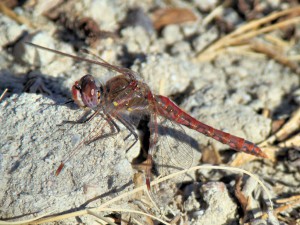 We recently visited Piute Ponds on Edwards Air Force Base in northern L.A. County. Due to the rising heat, it evolved into a rather poor day for birding. Accordingly, we looked at the thousands of dragonflies there instead. We saw dozens of Blue-eyed Darners and Variegated Meadowhawks. Others odes present there included Common Green Darner, Spot-winged Glider, Wandering Glider and Black Saddlebags. Surprisingly, we found much less diversity among the damselflies there, including Western Forktail and Familiar Bluet (see one here). Undoubtedly, we missed some species, but still, 8 species in one location is pretty good! 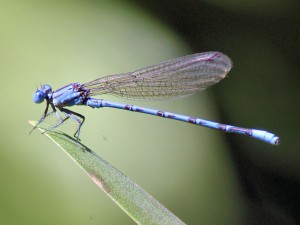 On the way home, we stopped at a park along the L.A. River and found Giant Darner, Flame Skimmer and Black-fronted Forktail. Finally, we stopped at the Fullerton Arboretum on the campus of Cal State Fullerton. There, we added several species, including Blue Dasher, Mexican Amberwing and Vivid Dancer. Fourteen species of odes in one day!

The photos in this post were digiscoped with a Swarovski ATX-65 spotting scope, the TLS-APO adaptor and a Canon EOS T3 Rebel DSLR camera. Furthermore, the 6-foot close focus of this scope at 20x creates some great shots on small subjects like 2-inch damselflies.