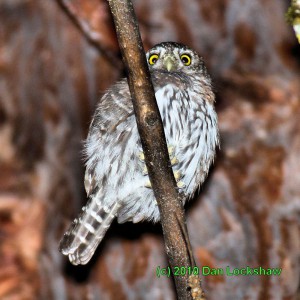 Two of us managed to get out of work, after many failed attempts, for a very quick trip to Yosemite. On the nights of September 27-28, we set out to find Great Gray Owl, Spotted Owl, and Northern Pygmy Owls. Although we did have good views of both Spotted and Northern Pygmy Owls. We did not spend the majority of our efforts looking for these species. The roads inside the park were also under “post-summer” construction which inhibited our movements in finding the owls. We only got out one morning, for a short period, to look for pygmy owl. That is when I took the photo here. This is a particularly good month to find this species because of post fledging vocalizations. Maybe next year we will have more opportunity to search for this owl thoroughly. Hopefully we will also take better photos and some video. 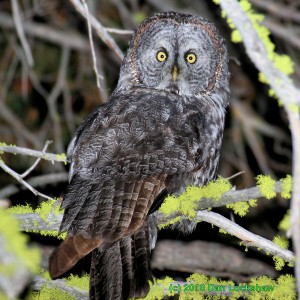 Fortuitously, timing of this trip was coincident with the release of recent research findings on the Yosemite Great Gray Owl. While older taxonomy had all Great Gray Owl as belonging to one of two subspecies: Strix nebulosa nebulosa of North America and Strix nebulosa lapponica found in Europe and Asia. Genetic analysis of Yosemite area Great Gray Owl has shown them to be a unique subspecies: Strix nebulosa yosemitensis, according to lead researchers John J. Keane and Holly B. Ernest. They also estimated that the Sierra Nevada population had not interbred with the northern populations for approximately 26,700 years. We got very close views and were able to take high quality pictures. This was pleasing and made our short trip a success. This is Yosemite’s rarest resident bird with population estimates ranging from 50 to 200 individuals in or within fairly close proximity of the park.

We did pull up right next to a female Spotted Owl sitting on a snow pole but didn’t get photos. She was along one of the main highways inside the park. The owl was obviously hunting the road. Given the dangers of such behavior on a main road this is a bit sad.