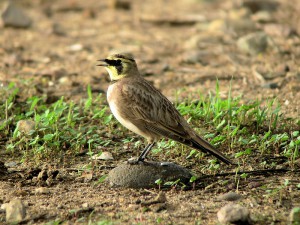 Recently, we drove to San Diego in search of the three longspur species reported at Fiesta Island in Mission Bay. You wouldn’t think an off-leash dog run area would be a great place to bird, but this is not your average bark park. The area is huge, with very few trees over gently rolling terrain of grasses interspersed with bare areas. Hundreds of people were there with their dogs, but all were very well-behaved. In fact, neither of us can remember a single instance of barking the whole morning – there may have been some, but it was so unobtrusive it simply didn’t register. A bumper sticker on a car there offered this good advice for life: “Wag more. Bark less.” 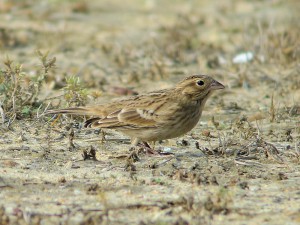 The first birds we saw were Horned Larks. They posted up everywhere all around us or walked around with their odd long stride. Their colors were radiant in the early morning sun. We joined several familiar birders on a knoll where they already had a very confiding Chestnut-collared Longspur. Typically, longspurs on their wintering grounds in southern California, are never confiding! 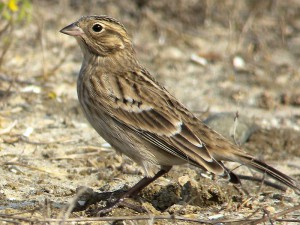 We regularly see longspur flocks near Calipatria east of the Salton Sea. Chestnut-collared Longspurs dominate out there. Lapland and McCown’s occur in much smaller numbers. Smith’s Longspur is rarer still. Out there, the longspurs hide in vast flocks of American Pipits, Horned Larks, Western Meadowlarks and Savannah Sparrows. You must catch them on the ground before they flush and fly away, starting the search all over again.

Once you have a longspur in view, the challenge is to get a good enough look to identify them. Failing that, you hear them clearly enough to separate them down to species. So to have a Chestnut-collared Longspur, calmly sitting between tufts of grass, all of 20 feet away was simply unimaginable. We didn’t just get to see it – we got to study it! You could easily mistake this dull, streaky bird for a female House Finch. But the strangely long rear claw that gives longspurs their name is rather telling. 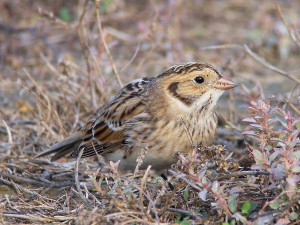 The next bird we found showed brighter markings, and it turned out to be a McCown’s Longspur. Neither of us managed a decent shot of this bird, which is a shame, but it was fun to see. This McCown’s Longspur was considerably more skittish, ducking behind clumps of grass and generally managing to stay out of view. We figured it somehow knew it was a star! That is often how things go when chasing longspurs! 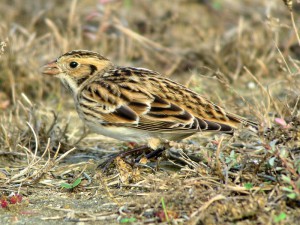 From there, another birder led us to the Lapland Longspurs that turned out to be the stars of the day! In winter, the Lapland is the most colorful of longspurs. One of these was even friendlier than the Chestnut-collared had been. We ended up within 15 feet of this bird as it munched on seeds. Apparently, neither a dozen excited birders nor the constant whir of camera shutters bothered this bird a bit. The closeness of this bird made us grateful for the 15.5-foot minimum close focus of the Leica Apo-Televid scope, which enabled some stunning digiscoped shots with the D-Lux4 camera, and a foot further back, with the Kowa TSN-884 spotting scope and Nikon CoolPix P6000.