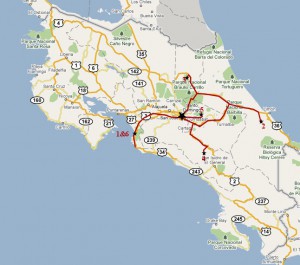 Friend and expert photographer David Nelson and I traveled to Costa Rica to do some research on Vermiculated Screech-Owl. While there, we also photographed several other owls including two species that I had never seen before. We flew into San Jose and then headed west to the Carara Biologica Reserva area (1). This area had the first new owl for me: Striped Owl. I have missed this species on previous trips to southern Mexico, Panama and Costa Rica. It is a really beautiful bird. We found four Striped Owls and multiple birds of four other owl species this first night and the next morning.

Our second day we went back across to the Caribbean lowlands to stay for two nights in Veragua (2). This is a developing ecotourism and educational reserve in eastern Costa Rica. Not yet developed for anything beyond a day visit, it was one of the most interesting places we went. The reserve is about a 45-minute drive off the main highway and then another hour on rough dirt roads. We stayed in very basic quarters, setup for the construction crew that had built the reserve’s educational center. At 6:00 each night, everyone left the reserve and we were alone, locked-in and far from anyone. It was quite an experience to be in such a remote Caribbean jungle all alone. The staff turned off the generators at night. Subsequently there were no lights, fans or even water, and no phones or cell phone coverage.

After Veragua, we went north to La Selva Biological Reserve (3) to get additional recordings and photos of Vermiculated Screech-Owl there. La Selva is a popular destination in Costa Rica. We spent the fourth and fifth nights at this location. Although we got what we went there for, we struggled with rain. In both Veragua and La Selva, we had multiple rain storms that made it difficult to achieve our goals – cameras and recording equipment do not do well in rain! Despite the weather trouble, we got done everything we went there for. La Selva is a beautiful place and a popular birding destination. A large NBC crew (200+) arrived to shoot some new reality show the day we left. They wouldn’t tell us what it was about. We were glad not to be not around for that.

The sixth day found us south again, this time in the San Geraldo de Dota area, a lush, secluded canyon region in the mountains below San Jose (4). We were hoping to photograph a rare red phase of the Costa Rican Pygmy-Owl that I knew was nesting in this canyon. Our stay was very pleasant and we saw lots of new species of birds and wildlife. We found the pygmy-owl we went for, but it stayed very high up in the canopy so our photos were poor. I have photographed and recorded this species before but have to try to get pictures of this color morph another time in the future. It was still nice to get out of the lowlands into the cooler mountains and an interesting change of birds, wildlife and habitat.

On our seventh day we moved to the volcano Irazu to the east of San Jose (5) to look for Unspotted Saw-whet Owl, a very rare species in Costa Rica. It was a long shot and access into the forests along the side of the volcano proved to be just too difficult without more time to explore the area. We did find and photograph Bare-shanked Screech Owl, another mountain species, while searching the area. Late that night we decided to return to the Carara (6) area on the west coast where we began our trip. That way, we could try for better photos of Ferruginous Pygmy-Owl in the early morning before catching our flight home the next afternoon.

Our last morning in Costa Rica went just as planned. We found at least four different Ferruginous Pygmy-Owl individuals and got better photos than we had previously. Even with the unseasonable amounts of rain at this time of year, it was a productive trip and we saw lots of wildlife. Costa Rica is a very beautiful country and always a pleasure to visit.