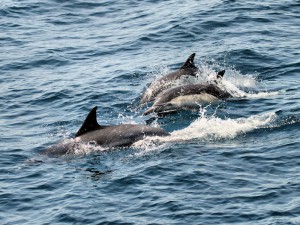 The Summer Pelagic trip out of Dana Point sponsored by Sea & Sage Audubon was last Saturday, 12-JUL-14. On Saturday, a light wind raised a bit of chop that made it unpleasant for some trip participants, even on the 70-foot R/V Sea Explorer, and it certainly made photography a bit more challenging! Getting a good, steady view of these birds can be difficult at the best of times, and an additional source of motion doesn’t help.

Conditions in the Santa Barbara Channel seldom get anywhere near as rough as those out in the open ocean. In fact, our relatively calm waters are part of what makes these quarterly Sea & Sage Pelagic trips with the boat from the Dana Point Ocean Institute so appealing. Another advantage to these trips is the vast experience of the Ocean Institute personnel, particularly Captain Mike Bursk, whose vast knowledge of all the ocean wildlife adds greatly to the experience. 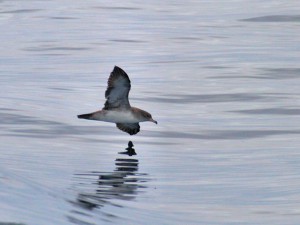 This particular pelagic trip was dominated by truly pelagic birds: procellariids (“tubenoses”), in the form of Black-vented, Sooty and Pink-footed Shearwaters and Black and Ashy Storm-Petrels. Many of these seabirds were heavily molting, and looking a bit patchy as a result. In some cases, the upper wing was missing so many feathers you could see features of the under wing right through it! (see a molting Sooty Shearwater (here)). Additionally, we had three species of alcids including Cassin’s Auklets, and both Scripps’s and Craveri’s Murrelets. Additionally, we had a good selection of larids including Western, California and Heermann’s Gulls, Elegant, Caspian, Common, Royal and California Least Terns and a lone Pomarine Jaeger. 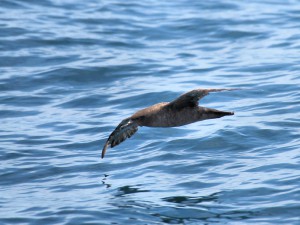 One interesting note on the day was the bird distribution. As we proceeded directly out to the Lausen seamount, we went through a “band” of Black-vented Shearwaters (here) that paralleled the near shore; further out towards Catalina Island, almost no Black-vents were seen. There we had good numbers of Sooty and Pink-footed Shearwaters.

Sooty Shearwater is readily distinguished from the other two by its completely dark belly. At distance, the easiest ways to separate these three species is by their flight behavior. Flapping speed and length of glide are inversely proportionate to size. The larger Pink-footed Shearwaters have a languid wing beat, coasting in graceful glides over the water, altogether more stately and elegant. By contrast, Sooty Shearwaters flap more rapidly and glide less, while Black-vented Shearwaters are almost frenetic with their rapid wing beats and short glides. 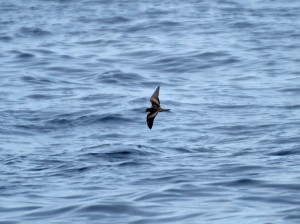 Closer to Catalina, we found several flocks of at least 30 feeding Black Storm-Petrels, often “walking” on the water with legs extended as they fed (see them walking here). Two Ashy-Storm Petrels were a special treat, distinguished by their paler overall color and more fluttery wing beats, contrasting with the nighthawk-like flight of the Black Storm-Petrels. Sadly, the Ashies stayed quite far away from the boat, not allowing for very good views, let alone good photos. Black Storm-Petrels aren’t really black; they’re just darker overall than some species. Closer views of these handsome birds reveal paler greater coverts that appear as light diagonal bars against the darker wing surface. 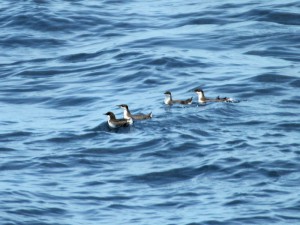 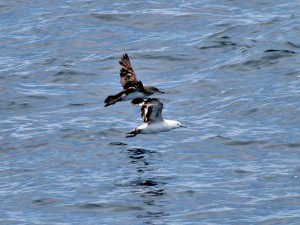 Often on these trips we see marine mammals or other unusual creatures besides birds that interest us. This summer pelagic trip was no exception. Travelling back down the coast in the afternoon, we encountered a very large hammerhead shark. The shark was swimming slowly along the water’s surface, something they very rarely do. Captain Mike sped past the shark and then drew up allowing it to overtake us for great looks. People on the upper deck of the boat had amazing looks! Hammerheads have a very prominent dorsal fin and an asymmetric caudal (tail) fin and we saw both protruding above the water’s surface as this great fish swam up to us.

The other unusual animal sighting of this trip involved two different partially leucistic Black-vented Shearwaters. One of these was nearly completely white on the anterior end and the normally all-black bill was pinkish from the lack of pigmentation (see more photos of this bird (here) and (here)). Sightings like these add real interest to an already fascinating pelagic trip!