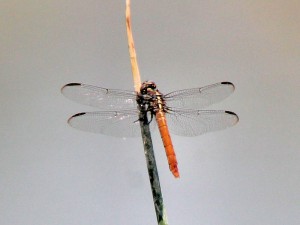 Mindful of the fact that it can easily top out over 120°F there in the summer, we took a lot of sunscreen and water, started well before dawn, and planned on leaving early. By 7:30 it was unpleasantly hot; by 8:30 it was sweltering. But we were finding birds and bugs so it was all good. We had the company of our good friend, Bob Miller, a local birding and odes expert who lives in Brawley, and who knows where to find everything worth seeing in terms of local wildlife at the Salton Sea.

Roseate Skimmer at the Salton Sea 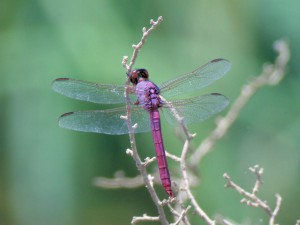 One of the more stylish and fancy of Salton Sea dragonflies is the Roseate Skimmer (Orthemis ferruginea). A relatively large dragonfly at 3-3.5 inches, the Roseate Skimmer male is characterized by his pinkish abdomen and purplish thorax, and a tendency to hang from exposed perches. They often sally hunt from perches but return to them, which makes them great digiscoping subjects. In this case, I was using a Canon EOS T3 Rebel attached to a Swarovski ATX-65 spotting scope with a Swarovski TLS APO adaptor. The female Roseate Skimmer is more orange brown on the abdomen and thorax with a pale cream stripe bisecting the top of the thorax. Although Roseate Skimmer is very uncommon in Orange County, but we’ve seen several at the pond in Thomas Riley Regional Park. 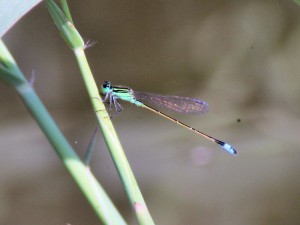 Damselflies of the Salton Sea can hold their own too. This male Rambur’s Forktail (Ischnura ramburii) has a black thorax with thin green lines on top, and green sides. The abdominal segments are mostly black on top with tan undersides, and the terminal segments are nearly completely blue. Note the two pale green dots behind the eyes. On a Desert Forktail, those dots connect to form an oblong dumbbell shape. Forktails are fairly small, and at 1-1.5 inches, Rambur’s is actually one of the larger ones! The female is completely different looking with reddish orange thorax and undersides to her abdomen (see photo here). Lastly, we found a lone female American Rubyspot (Hetaerena americana) at one location. Lacking the brilliant scarlet wash to the inner wings of a male rubyspot, she is still a study in subtle beauty (see photo here). 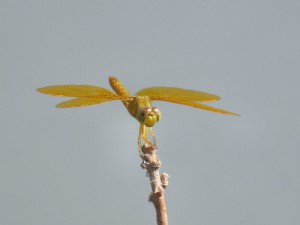 Among Salton Sea dragonflies, one of the most unmistakable is also be the smallest at just 1.5-2 inches: the Mexican Amberwing (Perithemis intensa). The overall yellow-orange color makes it stand out quite well from its perches next to streams, lakes and ponds and it even casts a nice yellow-orange shadow – just not a very big one! Mexican Amberwings are widespread across the southern quarter of California, and typically are easily found here in Orange County. 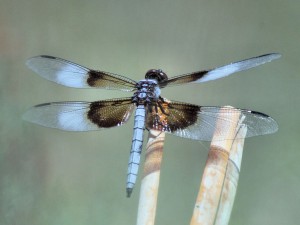 Perhaps the flashiest of Salton Sea dragonflies is the handsome Widow Skimmer (Libellula luctuosa). A solid 3 inches long, the Widow Skimmer, one recognizes them by the whitish pruinescence on its thorax and abdomen. Additionally, their possess white tipped wings with black inner halves. The liquid-looking eye is a deep prune-color that a camera just seems to slide out of focus on. This one is a male; female Widow Skimmers usually show just the slightest bit of a brownish tip to all four wings. We saw bunches of these handsome dragons, but only at a few locations. Oddly, more than one of these lovely bugs was trailing spider web from its wings or abdomen: some days you eat the spider; some days it eats you! 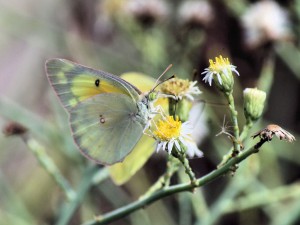 Easily the most common bug we saw at the Salton Sea was probably a butterfly: the Orange Sulfur (Colias eurytheme). Doubtless, the Orange Sulfur is one of the most widespread butterflies in North America, ranging from coast to coast. Generally better known as the Alfalfa Butterfly, it’s predilection for that host plant and tendency to hatch in massive numbers can make it a serious pest. Finally, like most sulfurs, it has the annoying habit of usually folding up when it lands to nectar. We saw them by the thousands on the day, mostly streaming across the road in their endless quest to become hood ornaments! Hence, Orange Sulfurs are too numerous to be endangered.