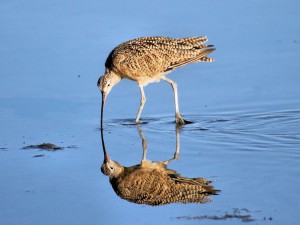 Long-billed Curlews are common wintering birds in southern California, gathering in huge numbers on the agricultural fields of Imperial County, and in smaller numbers at Bolsa Chica Preserve and Upper Newport Bay here in Orange County. A certain small number of Long-billed Curlews do not migrate north to their breeding grounds each year, meaning there are some individuals present year round at locations like Bolsa Chica. 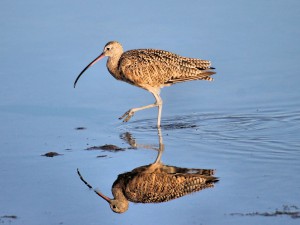 Generally, these large curlews occur in nearly any moist habitat. There, they use those amazing bills to probe the earth or beach for crustaceans, insects and other invertebrates. They are at home feeding in grassy fields, along the edges of ponds or rivers or at the seashore. Long-billed Curlews are fun to watch feeding as, with good optics, (try the Kowa TSN-883 spotting scope with a TE-11WZ 25-60x zoom eyepiece) it’s often possible to see exactly what they are catching and eating. They use their bill like a tweezers, first grabbing the prey. Next, they reposition it a few times, moving it up closer to the mouth. Finally, they deftly toss it up and swallow it in a single gulp.

These handsome birds vary little in coloration. Long-billed Curlews sport a rufous wash and a “tree branch” pattern of dark brown on the back and flight feathers. Meanwhile, the neck is lightly streaked vertically. The lower mandible is pinkish, particularly close to the gape; the legs and feet are flesh-toned. In North America, the only commonly occurring shorebird that resembles a Long-billed Curlew is the Whimbrel (Numenius phaeopus). Whimbrels are smaller, have shorter bills, bluish legs and feet, and thick dark stripes on the crown. Listen also for the haunting and beautiful Long-billed Curlew call, most often given in flight. We took these photos with a Canon EOS Rebel T3, using a 100-400 mm zoom lens.