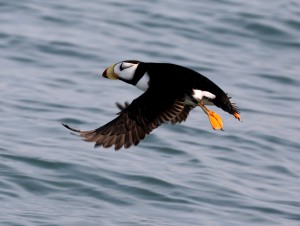 All three species of puffin, Atlantic, Horned and Tufted, are native to the northern hemisphere. Currently, all puffins belong to the genus Fratercula, which is Latin for “little brother”. Rhinoceros Auklet (Cerorhinca monocerata) was once included in the same genus as the puffins. Puffins are alcids – truly pelagic seabirds that feed by diving from the ocean surface and capturing small fish and zooplankton.

Desscription and ID of Puffins 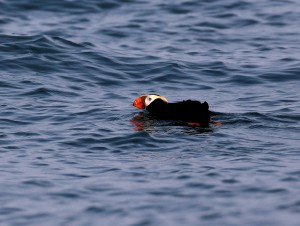 Distinguishing Horned and Tufted Puffins is fairly easy. You cannot miss the distinctive dark belly and heavy orange bill of the Tufted Puffin.  And of course, the Tufted Puffin exhibits the flamboyant blonde tufts that gives them their name. 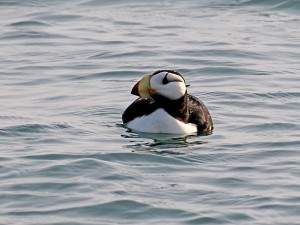 A Horned Puffin resting on the sea, Kachemak Bay, Alaska

Horned Puffins have a larger white cheek patch, bright orange and yellow bill with yellow gape, and the eponymous dark, fleshy “horn” that rises above the eye. They also have a curved black line extending backward behind the eye. Adult male and female birds are indistinguishable in the field. Juveniles present possible challenges to ID, but these are not too hard as these things go. Juvenile Horned Puffins have dingy grayish cheeks and black upper parts with bright white chests and bellies. Their gray bill has yellowish tone, and though heavy, is shallower than that of a juvenile Tufted Puffin.

Juvenile Tufted Puffins are similarly dingy gray about the face, but have a deeper bill that is distinctly dull orange; they are gray on the upper chest fading to whitish on the belly. It’s worth noting that the demarcation between white and black on a juvenile Horned Puffin is very sharp, while that of the Tufted Puffin is considerably less distinct. 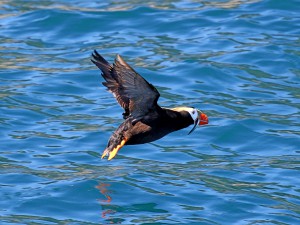 A Tufted Puffin lifting off with a candlefish in its bill, Gulf of Alaska

All puffins nest colonially, usually on islands or remote cliff sites. Tufted and Atlantic Puffins dig burrows in soft soil, extending roughly a meter beneath the surface. They line the nest with grass, feathers, leaves and other materials. By contrast, Horned Puffins construct their nests in rocky cliff-side crevices. Nest site availability is a major factor in limiting puffin numbers. The stiff competition for nest sites makes the birds defend their nests quite aggressively. All puffins pair in long-term relationships. They lay single eggs and pairs alternate at feeding and incubating. When incubating they hold the egg against a brood patch with their wings. Puffin chicks fledge at night, probably as a measure against predation; once on the water, they dive for safety. Chicks spend the first few years of their lives at sea. They usually return for their first breeding season at about 5 years of age. 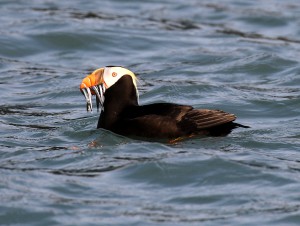 Puffins winter out to sea after the breeding season is over. Atlantic Puffin may appear as far south as the waters off southern Virginia. Horned Puffins seldom venture further south than the waters off northern British Columbia. Tufted Puffin winter as far south as Morro Bay, off the coast of southern California, though typically well offshore. As noted above, puffins are piscivorous, feeding on smelt, sand eel, herring and capelin. All these are small species of forage fish.

Due to a unique bill hinge that allows the bill to apply pressure evenly at different angles, puffins can catch and hold many fish on a single feeding run. This permits them to take longer foraging trips since they come back with more food per trip. It also means they feed their chicks fresh fish that they’ve not regurgitated – that definitely sounds more appealing! They also look so smug and proud of that bill full of fish each time. 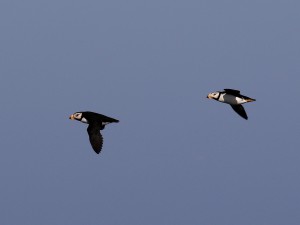 It is unclear what the future holds for these two charming alcids. Both have a somewhat limited range, and they live in the arctic. That region of the earth is experiencing more dramatic climate change than any other. There is no way to predict how these changes will impact the bird life of the region. Chances are it won’t do them any good. We can only hope that these puffins are more hardy and adaptable than they seem.