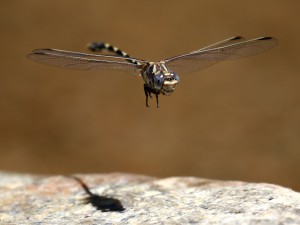 Recent reports of some first county record dragonflies in San Bernardino County took us up to Deep Creek. The United States Forest Service administers to this unit of the San Bernardino National Forest. Tom Benson discovered Bison Snaketails and Western River Cruisers on this relatively pristine creek in the San Bernardino Mountains. Tulare County previously had the southern-most records of Bison Snaketail. This find significantly extends the known range of that species. Likewise, the southern-most known range of Western River Cruiser was up in Kern and Inyo counties. These two species belong to the clubtail family. Clubtails have oddly bulging tail segments and brilliant colors, making them some of the weirdest-looking dragonflies in California. 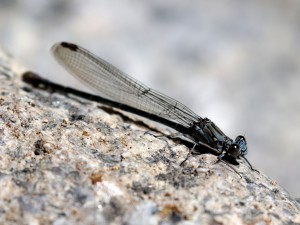 The habitat at Deep Creek is spectacular. A rushing stream descends through rocky canyons and pools beneath vertiginous cliffs. The creek starts falls 3000 feet over its 22-mile course before emptying into the Mojave River. There are rushing rapids and deep slow-moving pools, providing ample habitat for a variety of specialists. It is worth noting how the numbers play out in a pursuit like this. There are roughly 108 species of odonata in  California. Typically, it’s unusual to see more than about 7 or 8 species in any one location. In just a few hours, we recorded 13 species of dragonflies and damselflies, and our search was not comprehensive. 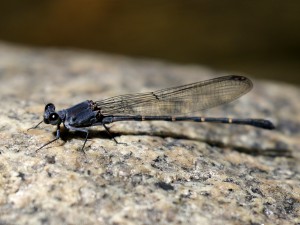 We arrived early, a good strategy because this popular location has limited parking. The descent from the parking lot was short and quick, and suddenly we were in another world. Canyon Wrens, Stellar’s Jays and Northern Flickers called from overhead. Clouds of Marine Blues and Northern White Skippers landed on sandy creek verges to drink.

The butterflies were spectacular on the whole. We saw about a dozen species there, including showy ones like California Sister, Western Tiger Swallowtail among others. But we got off to a bad start. The first ode we encountered baffled us. Distinguishing Northern from Boreal Bluets requires examining them under a magnifying lens. The next damsel to show up was spectacular: a dark male Sooty Dancer, (Argia lugens). The charcoal gray, pruinose appearance of male Sooty Dancers gives them their name.  Sooty Dancer is one of the largest North American damsels, being about 2 inches long. The females come in two forms: a dark tan coloration, and a beautiful bluish phase; we saw both forms at Deep Creek as there were dozens of these handsome damsels all along the creek. 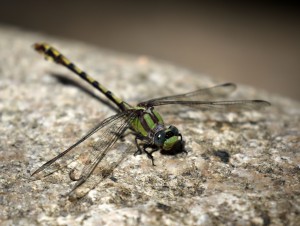 We forgot about the Sooty Dancers when the  first Bison Snaketail (Ophiogomphus bison) appeared. What a marvelous dragonfly! The colors are brilliant, from the bright green thorax stripes to the black and yellow abdomen. The grayish-blue eyes contrast with the pale green and cream face plate. The fantastic bulging segments 7-10 of the abdomen, supposedly resemble a cobra’s hood… Okay, maybe! But still, what a beast! We saw only males during our visit. Females are less brightly green on the thorax, but have a striking pattern of yellow and black abdomen pattern. They lack the bulging terminal segments. Females spend much time away from the water that the males patrol, hunting from perches in the nearby woods. 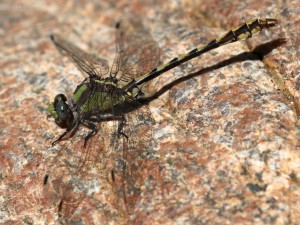 Male Bison Snaketail on the red rocks of Deep Creek

The next two species to appear were both spectacular and frustrating. First was a Walker’s Darner (Rhionaeschna walkeri), a large member of the Mosaic Darner family. This large dragonfly features the usual blue, yellow and black abdomen. But its eyes are grayish rather than the bright blue of the more common Blue-eyed Darner. Walker’s Darner shows white thoracic stripes and a bright white face plate, so it’s easy to identify in flight. Sadly, they are nearly always in flight, making them virtually impossible to get decent shots of. We had to settle for just seeing one.

Likewise, the next dragonfly to appear was the equally showy Western River Cruiser, (Macromia magnifica). Like the darner, this is a restless dragonfly, nearly always in flight over a repeating circuit. The Cruiser is a large dragon, over 3 inches long with over a 4-inch wingspan. The base colors are gray, black, brown and yellow. The thorax is gray and brown with slashing yellow diagonals. The eyes are pale gray. Horizontal black and yellow stripes mark the faceplate. The abdomen is glossy black with yellow accents on the upper surface.

The Western River Cruiser holds its abdomen in a graceful arch. This provides the best way to tell it from Pacific Spiketail (Cordulegaster dorsalis). Both dragonflies occur at Deep Creek. We saw multiple spiketails at Deep Creek. The Pacific Spiketail’s abdomen is glossy black with yellow on the upper side. But it differs in its darker thorax and bluish eyes. The prominent sharp ovipositor of the spiketail projects from the terminal abdominal segments like a medieval pike. 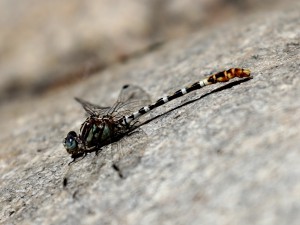 Side view of a male Serpent Ringtail

The next showy dragon to appear was a Serpent Ringtail (Erpetogomphus lampropeltis), yet another member of the large clubtail family. This one was a delightful surprise to us. We hadn’t heard any were present at Deep Creek, but we saw three or four of these beautiful dragonflies. This large dragonfly has a gray and cream face plate, bluish eyes, and a pale bluish thorax with black stripes. The abdominal segments are bright white with black accents until the last three segments. Those segments stand out for their burnt orange color and brownish markings. Unlike the previous group of dragonflies, the ringtail often perched obligingly for photos, which certainly added to its abundant charm! 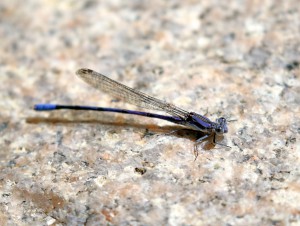 At the same time the ringtail was buzzing us, we found several smaller damselflies. We first found a male Lavender Dancer (Argia hinei) perched on a shaded rock. This overall pale purplish color of the abdomen and thorax gives this delicate little damsel its name. Black accents on the abdomen and gray or cream color beneath the thorax complete its look. Like most dancers (the Sooty being a notable exception) the terminal abdominal segments of Lavender Dancer are bright sky blue. Sooty Dancers exhibit bicolored eyes with many other dancers; their’s are dark black and blue upper half and a pale off-white lower half. More common along Deep Creek was the ubiquitous Vivid Dancer, (Argia vivida). Vivid Dancers have dark blue eyes. and thorax. Backward-pointing black arrowheads or darts  mark the middle segments. 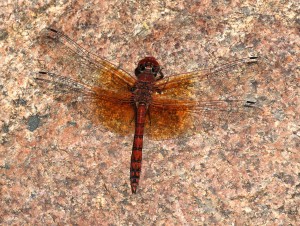 Another common ode we found here was the showy male Flame Skimmer (Libellula saturate). These dragonflies have bright reddish orange bodies and eyes. The orange wash extends beyond the nodes in the forewings. One of the most numerous odes on Deep Creek was the Red Rock Skimmer (Paltothemis lineatipes). Males  show an orange wash to the fore and hind wings, and brick red color in the eyes and abdomen. A delicate black chain pattern marks the abdomen. We saw both male and female Red Rock Skimmers. The females were either in wheel conformation with males or were actively ovipositing; none were unattended by males. 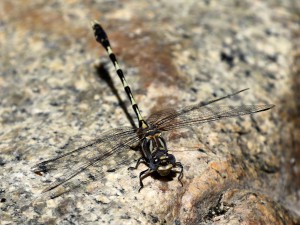 One of the last dragonflies we found on Deep Creek was the Gray Sanddragon (Progomphus borealis), another type of clubtail. These large showy dragonflies were always perched on wet sand beside the stream, or on rocks in the sand. Gray Sanddragons are intricately colored with pale grayish blue eyes, off-white or yellow faces, a gray thorax with stripes in brown and pale yellow, and an abdomen of brighter white or yellow markings on black. The terminal abdominal segments bulge slightly, and are mainly black or brown with yellow accents. Even the legs are showy, being shiny black with pale gray markings. Gray Sanddragons will often perch obligingly, though they don’t allow particularly close approach as they are fairly wary. It’s best to use a longer lens and not approach too closely, or to approach slowly and gradually. 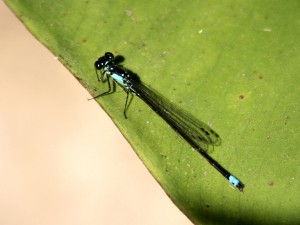 Some of the less common damsels also at Deep Creek included a single male Pacific Forktail (Ischnura cervula), small and delicate with a shiny black thorax marked by pale bluish green below and a quartet of pale blue dots on top. The abdominal segments are mostly dull black above and tannish below, with the typical sky blue segments 8 and 9 at the end. Pacific Forktails show bi-colored eyes as well, the top third being shiny black, and the lower two thirds emerald green. Forktails are named for the bifurcated clasping apparatus of the males, a feature not obvious in photos unless under a microscope. 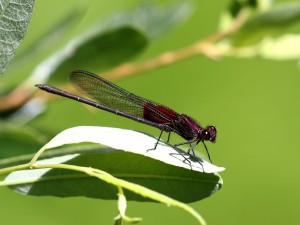 The last damselfly species we saw was another showy one, the American Rubyspot (Hetaerina americana). We saw a handful of males of this species, usually perched on foliage or rocks, and apparently preferring sunny spots. The American Rubyspot is named for the bright scarlet wash to the inner third of its wings, but the red is not confined to the wings. Our rubyspots showed metallic reddish eyes and thorax, and even a dull reddish wash to the abdominal segments, which were also marked with thin pale tan rings at the joints between segments. Overall, this is a very photogenic damselfly!

Other members of our party also observed a Grappletail, another large and showy black and yellow dragonfly. Sadly we trailed the main party and the Grappletail departed before we arrived. In the end though, this was a spectacularly beautiful spot with an amazing diversity of odonata. We certainly plan on going back in the future!