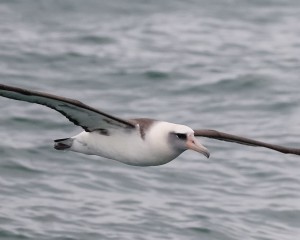 The boat left Dana Point harbor and headed straight out into the California Channel. Four miles out, a call of “Albatross!” went up from the back of the boat. The usual stampede ensued! The bird in question, a spectacular adult Laysan Albatross, Phoebastria immutabilis, provided a first record for Orange County. This particular individual was a handsome adult bird. The distinctive dark wings and all-white body, nape and crown are distinctive. And the grayish shadow to the auricular and large pinkish bill with a pale bluish tip seal the deal. The bird made several passes by the boat, found nothing that interested it, and sailed off, leaving us all wishing for more. Alas, it was not to be as we never saw this bird again during the entire trip. But it sure woke everyone up! 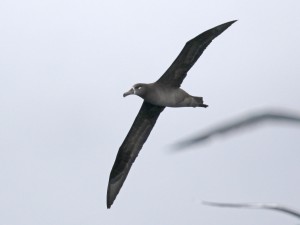 Less than a mile further out, suddenly, people began crying “Albatross!” again. We all hoped it was the Laysan returning. To our surprise, a Black-footed Albatross, Phoebastria nigripes, came cruising up in our wake. Slightly larger than a Laysan, Black-footed Albatross is a uniform blackish-brown color except for a white flash in the primaries and a white ring around the base of the bill. The ring gets more prominent as the birds age. Black-footed Albatross is also quite rare in Orange County; there were only a few previous records of this species in county waters. This bird was quite a bit more cooperative than the Laysan, making several passes around the boat, and coming up in the wake among the gull flock to inspect offerings of popcorn and other chum. But once it coursed off, we never saw it again.

As it happened, we saw several more Black-footed Albatrosses during the trip. Careful analysis of people’s photographs indicated that we recorded at least three different individual albatrosses. 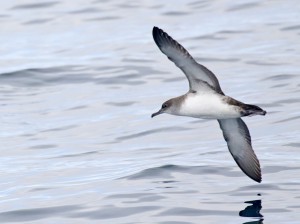 A Black-vented Shearwater crossing through the wake

The two albatrosses had everyone on board excited, and now they were all alert. Observers scrutinized every Black-vented Shearwater (Puffinus opisthomelas) carefully, and it didn’t take long to find an “all dark shearwater”, which turned out to be a Sooty Shearwater, Puffinus griseus. Unlike Black-vented Shearwaters, which breed in the northern hemisphere, Sooty Shearwater is a southern hemisphere bird, and at this time of year, most of them are below the equator perpetuating their species. We usually observe a few stragglers like this one on the winter pelagic trip. Looking at the incredibly worn state of this bird’s plumage, one wonders how it flew at all!

When the spring pelagic occurs, many of these bird will be post-breeding and wandering about the northern Pacific. Sadly, the only Flesh-footed Shearwater (Puffinus carneipes) we saw all day never really approached the boat. 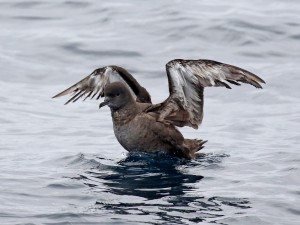 We saw three alcids on the day: Scripps’s Murrelets (Synthliboramphus scrippsi), Cassin’s Auklets (Ptychoramphus aleuticus) and Rhinoceros Auklets (Cerorhinca monocerata). The Scripps’s Murrelets invariably occurred in pairs, suggesting they were preparing to breed. By contrast, the two auklet species were in small groups or by themselves.

Most alcids are fairly shy, and getting close enough to them for good photographs is difficult. Something about a 75-foot boat bearing down on them intimidates them! Usually, when the boat approached, they dove or took off running on the surface of the water. On the upside, many of the Cassin’s Auklets were too fat to get airborne! Other trip highlights included a Black-legged Kittiwake, a female Brown Booby, and an extremely pale Northern Fulmar. As usual on a trip like this, there were interesting non-birds as well. Marine mammals observed included migrating Gray Whales, Common Dolphins and California Sea Lions. Pelagic trips always produce something interesting to see!