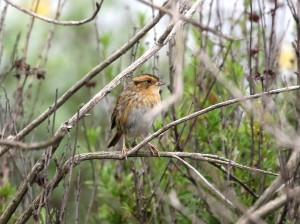 The brackish and salt marshes of California are an important and globally-threatened ecosystem. At this point, a century of “civilization” has filled, polluted or destroyed over 95% of California’s coastal salt marshes. These estuaries and marshes are incredibly important. Biologically speaking, they are some of the most productive acres of habitat anywhere. They host tremendous species diversity, and act as vital nursery grounds for many ocean species. They serve as feeding and breeding resources for a variety of species. Endangered species like the California Least Tern, Western Snowy Plover and Light-footed Ridgway’s Rail all use coastal saltmarshes. They also provide wintering or year-round habitat for a number of interesting bird species. The focus of this article is three such species: Belding’s (Savannah) Sparrow, Large-billed Savannah Sparrow and Nelson’s Sparrows. 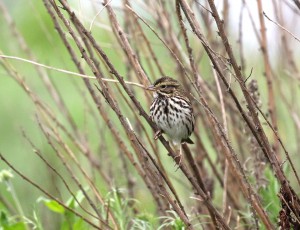 Here in southern California, a visit to a coastal marsh like the Bolsa Chica Ecological Reserve in Orange County invariably produces a view of Belding’s Savannah Sparrows (Passerculus sandwichensis beldingii). They flit from perch-to-perch in the pickleweed (Salicornia), skitter between low bushes or perch on the fences briefly. Their reedy, squeaky songs echo across the marsh from nearly all points. So what makes them interesting? Well, the Savannah Sparrow complex is, taxonomically, a hotbed of genetic diversity and interesting local forms or populations. In the northeast, the globally-threatened Ipswich Sparrow (Passerculus sandwichensis princeps) is larger and paler.

The largest population of Savannah Sparrow (Passerculus sandwichensis nevadensis) is of intermediate size and pattern, neither strikingly large nor of notable darkness or pallor. Brown, mottled upperparts, a white breast with streaking on the upper chest and flanks, pink legs and beak all typify this subspecies. But the most prominent field mark is the bright yellow in the lores that may extend behind the eye in the supercilium. 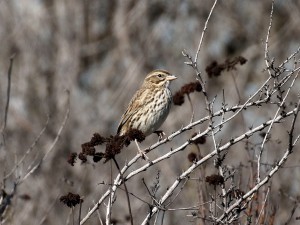 The Belding’s Savannah Sparrow is a year-round resident of coastal saltmarsh from southern California and Mexico. The fourth subspecies, the Large-billed Savannah Sparrow (Passerculus sandwichensis rostratus) resides primarily in Mexico, but irrupts northward annually, reaching locations like Bolsa Chica and the shores of the Salton Sea in small numbers. The two saltmarsh Savannah Sparrow subspecies differ from the others in that their habitat is not grassland and they do not migrate in a traditional sense. 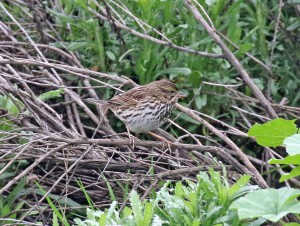 Belding’s Savannah Sparrow, foraging in a tangle of brush.

Identifying these two saltmarsh subspecies of Savannah Sparrow is not particularly challenging with good views and a little care. Belding’s Savannah Sparrow is a very dark on the dorsal surface where, much darker than typical prairie Savannah Sparrows. The chest has sharply-defined streaking of a blackish color. This overall dark coloration makes the yellow supra-loral mark really “pop” visually. 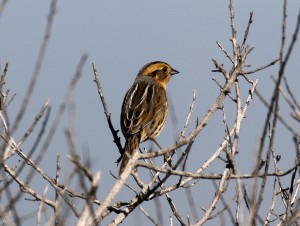 Nelson’s Sparrow, showing the beautiful coloration of the back and face

The largest  population is the nominate race which breeds from central Canada south to the Dakotas and northwestern Minnesota. The other two races breed along the shore of Hudson Bay from Manitoba east to Quebec, and in maritime Canada. This includes  the St. Lawrence Seaway, New Brunswick, Nova Scotia and Prince Edward Island, and south through Maine. The birds that winter in coastal California are almost certainly predominately of the western nominate race, A. n. nelsoni. 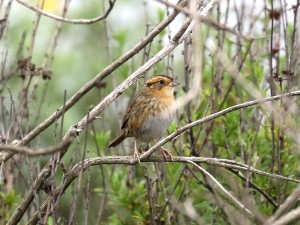 Shy and retiring, the Nelson’s Sparrow can be difficult to find in southern California.

Identifying Nelson’s Sparrow is not particularly difficult as the birds are visually striking and quite beautiful. Rather, the hard part is seeing them at all! The two Savannah Sparrows sit in the open and frequently vocalize to help you locate them. Nelson’s Sparrow is a skulking species that is usually silent on its wintering grounds, except for quiet little tseep calls. The song is a sibilant hissing buzz. The trick to seeing Nelson’s Sparrows is to look when unusually high tides force them up out of the marsh. Alternatively, you can stake out likely spots for hours and hope to get lucky… But it is so worth the wait.

Bright individuals of this species feature a rich burnt-orange coloration in the broad supercilium. Orange outlines the ear coverts and the moustachial regions. A paler orange wash includes the throat, upper chest and flanks down almost to the legs. Purplish-gray mottling contrasts with a darker brownish back with lines of white streaks for accent. The primaries are brownish with darker brown tips and pale edges. The belly is off-white to gray, and brown streaks mark the orange flanks. A dark brown post-ocular line separates the purplish gray ear coverts from the orange supercilium. The overall effect is a striking and lovely sparrow.

So, there you have it: three winter-dwelling sparrows in our California coastal saltmarshes, all of which come from different places. The Belding’s Savannah Sparrow lives and breeds there all its life and is fairly common. The Large-billed Savannah Sparrow irrupts northward from Mexico in winter with low numbers in limited locations. Nelson’s Sparrow migrates  from the middle of the continent and occurs in very small numbers in widely dispersed locations. Many ornithologists think that the two Savannah Sparrows are distinct species. Some experts favor splitting this species. That would give these three saltmarsh sparrows another thing in common besides being winter neighbors.