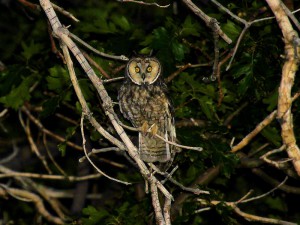 This last Memorial Day weekend (5/24-5/26) we decided to take a look in the Eastern Sierra Nevada for Broad-tailed Hummingbird. After much research on where to look… we found none. I had hoped, as we blog on the regular occurring California hummingbirds, this last one might be easier. On the other side of the coin we did find some interesting places and interesting birds in our Eastern Sierra exploration.

We left on Saturday after work and headed north. By the time we got up into the southern part of the Eastern Sierras it was late at night. Our first stop was to look for Long-eared Owl just south of Bishop. Searching for owls in unfamiliar areas is difficult enough. Adding the navigation on dirt roads on a moonless night. While trying to find proper habitat. Once out in the unfamiliar dark desert, I figured I may have underestimated the challenge.  All of this said I was very surprised when an owl found me.

We had stopped to check a small group of trees and in my typical fashion I quietly slipped under the trees and began to hoot to see if anyone might answer. Just then, a Long-eared Owl attacked me. It was a shock! Crash, talons first, square in the forehead he hit me hard. Wow, am I glad he missed my eyes! The owl had come in so low and it was so dark that I had never seen him. Feeling his sharp talons right before his chest collided into my forehead is a vivid impression. Luckily no damage other than a minor scratch on my forehead. Getting up from the ground I had to gain a moment of composure. Back to business, I took the picture of him shown here (above left). So we were off to a good start! 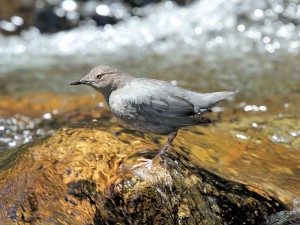 After a few hours of sleep we left Bishop in the early morning for Tom’s Place to “not find” Broad-tailed Hummingbird. Heading up in elevation from there we checked several other spots for possible Calliope and Broad-tailed Hummingbirds. No hummingbirds, although we did manage to find an American Dipper nesting under a small bridge at the Rock Creek Lodge. For the readers here unfamiliar with this species, he forages under water in fast moving mountain streams using his wings to swim. American Dipper is a birders’ favorite because of his distinctiveness. The picture at the right shows him standing in the stream after his last food delivery.

There were a couple other birds of interest as we came back down the hill towards Tom’s Place. Photos of them are below. Spotted Towhee is the first photo. (below left) The towhees of this area have a different song and it was really a surprise when we found this bird singing so differently from our coastal towhees. There may be a division of this species into coastal and Great Basin subspecies. The next photo (2nd on bottom left) is a Clark’s Nutcracker. Last of the pictures directly below is a comparative photo of two Cassin’s Finches. The bird on the left is what you expect to see and the one on the right is a bird with no streaking on his underside – very unusual.

Last of our stops before returning home was Mono Lake. Although we had been north of here in our hummingbird searches, a trip into the Eastern Sierras would not be complete without a stop here. The first photo (below-left) is a Sage Thrasher. This is a very reliable spot to find this bird since they breed here in the dry sagebrush along the lakeside. The next photo is a Violet-green Swallow. These Violet-green Swallows were extremely colorful. I have never seen these quite this colorful. They are abundant along the lakeside. 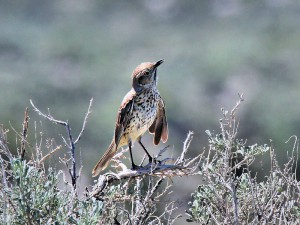 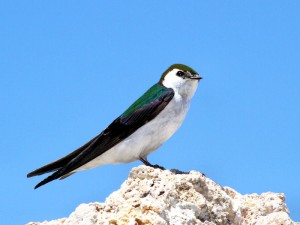