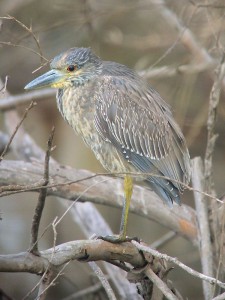 We went on a Saturday morning, with someone who had seen the bird only the day before. Thus, we were confident of success. Naturally, we couldn’t find the stupid bird! We circled the entire pond under the bluff there. We checked out every immature Black-crowned Night-Heron on the property, without any success. Finally, it turned out that the Yellow-crowned Night-Heron was actually roosting among a large group of Black-crowned Night-Herons in the trees right where we started. The night-heron cooperated, but only grudgingly. It gave us long looks at fairly minimal distance. But it perched in a dense tangle of branches that always obscured it. Eventually we got a few photos. 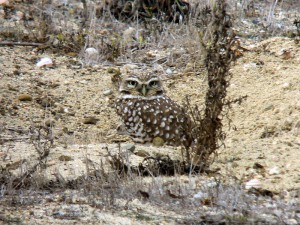 Next, we searched the ground squirrel burrows around the mesa looking for returning Burrowing Owls. Eventually we found one bird. The didn’t get great views because the bird never completely emerged from its burrow. But at least we found it. Later in the day, someone else found a second bird. Burrowing Owls are often hard to locate. If you don?t know how or where to look for them, overlooking them is easy.