A Stop Before Work

I made a quick stop coming into work this morning by the El Toro Marine Base. Flying overhead was the Golden Eagle that I have heard has been in the area recently. It appeared that there was some rather small bird chasing it. This seemed a bit unusual so I thought I’d watch what happened. I got out my camera to take a couple photos. So maybe I could figure out later what the smaller bird was that was chasing the eagle. 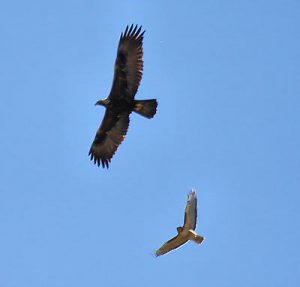 My first looks at the smaller bird chasing the Golden Eagle

As I watched the smaller bird chasing the eagle it began to dawn on me what that small bird was. That was no small bird. The small bird was a Red-tailed Hawk! Furthermore, he has a 4+ foot wing span. Seeing these two birds next to each other in flight really makes it clear how big that eagle is. 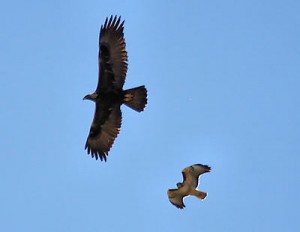 At a closer look the smaller bird is a Red-tailed Hawk! 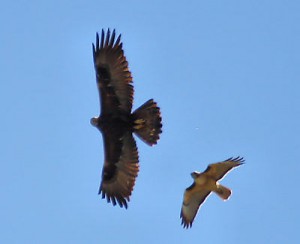 The Red-tailed Hawk is getting very close.

Now the excitement really escalates. So to my amazement and mid-air… ATTACK! The Red-tailed Hawk finally attacks the Golden Eagle. This is probably 100+ feet overhead. The eagle flips upside down and both raptors go at each other with talons extended.

Twice I watch this until the two raptors are out of view. This is not because they far away but because they are dropping in altitude and I loose sighting of them with a nearby low hill and obstructions. What a sight!!! It was also a stroke of luck that I decided to take a picture. 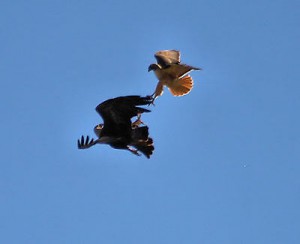