In late February we took a trip to Oaxaca, Mexico to find the newly defined Oaxaca Screech-Owl. This was going to be a real challenge. There is very little information regarding this species. We figured since we were looking for difficult to find species we would add Fulvous Owl to our search too… since it has no confirmed Oaxaca range at all. 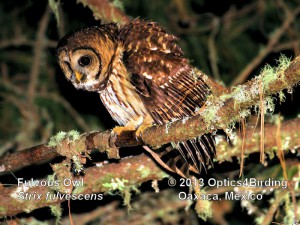 Although the  Fulvous Owl does not have a formal range listing showing it as occurring in Oaxaca, we knew there had been reports of sightings in recent years. We even had a fair idea of where to look or at least a general area. That was still weak information on a species that is only supposedly present. I had some previous experience with this owl from the mountains in Southern Chiapas. I knew he was normally resident above 7,000 feet in elevation. The habitat would be dense cloud forest with large trees. This owl is a fairly vocal one. Like its cousin, the Barred Owl, it is reasonably bold in behavior.

We underestimated the difficulty of searching such a vast area for one owl with the time and information we had. We spent four full night searching the mountains. Adding to the difficulty was “minor altercations” with the locals, the typical dangers of being on remote dirt roads in Southern Mexico at night, and being in unfamiliar locations. Yet our perseverance paid off when we found a beautiful pair of Fulvous Owls. That just saved us a difficult trip to Chiapas or Guatemala and what a beautiful owl this is! 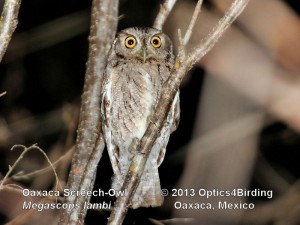 We headed for the coast now that we had finished the easy part! Next was to search for Oaxaca Screech-Owl. The descriptions of this owl are definitely not consistent. We knew of no recordings and there were no photos available. The people who wrote the research we could find had done it using museum skins.  No researcher or guide we had contact with had ever seen this owl. So we first checked the locations where the research specimens had come from so long ago. There was no longer native habitat and only man-made sounds at night.

No sweat, all we needed to do was find a screech-owl along the south-eastern Pacific coast of Oaxaca (or at least within 50 miles of the coastline) with an unrecognizable vocalization. With a little inside info of where to look from Michael Carmody, a top guide here in the US, we finally located the Oaxaca Screech-Owl (or some owl with an unrecognizable call in the right area). The problem was that it stayed buried deep in thick thorn forests and was so timid that we spent five nights traveling every back road we could find to get a glimpse of this owl (and every day pre-scouting for proper habitat). Now I know why there are no pictures out there! With this experience behind me I am certainly going to have to come back here again and see if a different time of year makes seeing this owl a bit simpler. 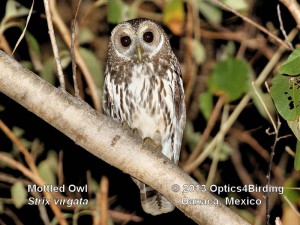 We did come upon and take pictures and recordings of several other owl species that I should mention here. Mottled Owl was the first of these. This is a common owl species in Mexico. The surprise was to find the northern race this far south. The two races of Mottled Owl are readily distinguishable. The northern race is much lighter than the southern race. Photos of both races can be seen on Owling.com. I have seen the southern race to the north-east of the Oaxaca coast in Chiapas. We saw multiple Mottled Owls in our efforts to get one of those darn Oaxaca Screech-Owls to show itself. Mottled Owl is probably a predator of Oaxaca Screech-Owl. This one came in looking for dinner but found us instead! 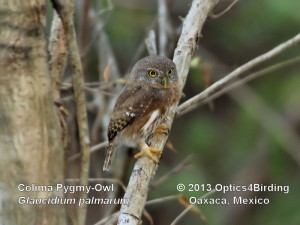 Another owl we encountered was Colima Pygmy-Owl. Oaxaca is the southern range extent for this species. It is smaller than the Mountain Pygmy-Owl and found at lower elevation. This cute little owl is extremely unpopular with the other small birds because despite being the size of a large sparrow they are voracious predators that prey upon the other birds as their primary diet. There were quite a few of these that were vocal both day and night. Since he is primarily diurnal (active in the day) it was interesting that we heard them also in the night. In retrospect it might have been interesting to see if we could have called one in at night. 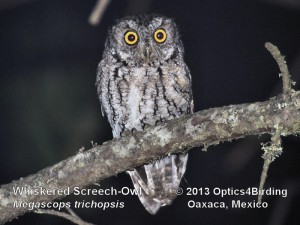 We found two owl species in the mountains to the east of Oaxaca City that also deserve note here. Whiskered Screech-Owl (photo shown) was the first of these. It is resident and non-migratory throughout its range. In the northern extents of its range it is a resident owl species of south-east Arizona. It is a common resident  throughout most of Central Mexico and south into Oaxaca in proper habitat.

Flammulated Owl was the second of these owl species. This small owl migrates into the US in the spring and summer. This is probably the most migratory owl species in North America. Howell does not mention this owl being in these mountains. Finding this species surprised us. Furthermore they were abundant in the higher elevations. In the US during the winter months all Flammulated Owls migrate south out of the country. At this time of year (late February) they were very vocal in the mountains. It would be interesting to survey this area a few months later to see if the Flammulated Owls all migrate north. 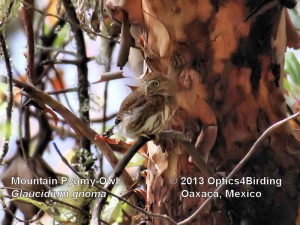 Last owl of mention here is the Mountain Pygmy-Owl, another very small diurnal owl, which is similar in habits and appearance to the Colima Pygmy-Owl. His primary diet is also the other small birds and is about as equally unpopular with them! He is vocally different from the Colima Pygmy-Owl and found at much higher elevation. Our primary interest with this species, in this location, was to have recordings to compare with the nearby Guatemalan Pygmy-Owl that we will look for in Chiapas on a future trip. The Mountain Pygmy-Owl is found as far north as Arizona and although accepted by most authors as unique from Northern Pygmy-Owl (vocally and genetically distinct), the AOU still combines this with Northern Pygmy-Owl. Expect that to change in the future.