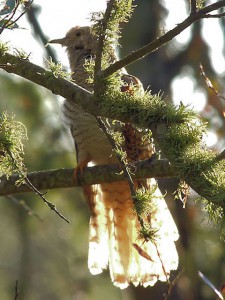 When someone found a Common Cuckoo (Cuculus canorus) at Watsonville Slough, we knew we had to try for it. Common Cuckoo is an Old World species with a broad distribution in Europe and Asia, with some wintering in Africa. You’ll note though that none of those places include California! In fact, the species is regular if not annual on the islands of western Alaska. However, prior to the Watsonville bird, only one previous sighting in the lower 48 states existed. That bird graced Martha’s Vinyard more than 30 years ago. This Common Cuckoo may be common in Asia, but south of Canada, it’s decidedly uncommon. We anxiously watched the birding hotlines through Saturday. After the latest sighting in the afternoon, we decided to go for it. How do you resist a bird this good?!

We arrived in Watsonville in the wee hours of the morning. We tried four different motels before finally secured lodgings for the little remaining night. Dawn came really early the next morning, and dragging ourselves out of bed was an act of will. But hey, we’re birders and Common Cuckoo is a killer bird so we did it. So did a lot of other people, as it turned out. Over 50 birders crowded Ramsay Park as we pulled up. And in something of an anti-climax, they already had the bird in view as we walked up. We decided we could live with that!

This Common Cuckoo may only have been an immature, but it was already a veteran when it came to positioning itself. The bird frequented willows on the western edge of Watsonville Slough. There it expertly selected perches that invariably placed it right in front of the sun from the only available vantage points. It also chose spots where there were always intervening branches and leaves in front of it. That confounded all auto-focusing. We took many obstructed photos. These are some of the shots that were a little less so. Note the lovely orange orbital ring and the gorgeous barring to the chest. These images were captured through a Kowa TSN-884 spotting scope equipped with 20-60x zoom eyepiece and a Nikon CoolPix P6000 camera attached using a Kowa TSN-DA-10 digiscoping adapter. We mounted the optics on a Manfrotto 701HDV,055CXV3 carbon fiber tripod with a digiscoping head.