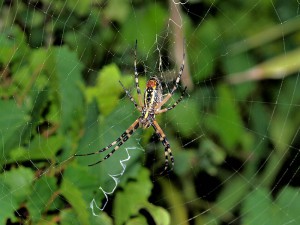 Argiope Spider on its web

We recently attended a family reunion in St. Augustine, Florida where 14 of us from 4 generations packed into a single beach house. If it sounds crazy, that’s only because it was, but what a blast! The house sat on the inland waterway side of Anastasia Island. Still, it was just a 5-minute walk to the Atlantic Ocean beach. The inland waterway was an ever-changing wildlife tableau. Ospreys always remained in sight over the waterway. Belted Kingfishers chattered as they flew by, and squadrons of Brown Pelicans cruised by.

The waterway got much more active when low tide exposed the oyster beds. This brought a bevy of Snowy and Great Egrets, Great Blue, Little Blue and Tricolored Herons to feed. At high tide, a small family group of Bottle-nosed Dolphins including one juvenile the waterway was patrolled by. We even saw the telltale large, finless shape of a distant manatee once or twice. Even the yard had its wildlife. The only Prairie Warbler of the trip was in the backyard. The large, fierce-looking but harmless garden spiders were everywhere you looked. They didn’t usually erect their elaborate webs across walkways, but it paid to watch where you walked! This is a female Black and Yellow Garden Spider (Argiope aurantia) showing the typical zig-zag central panel in its web. 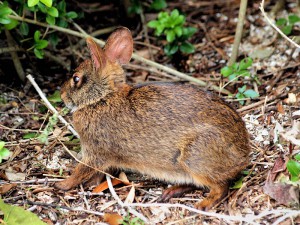 The St. Augustine trip wasn’t a birding trip specifically. But we still found a lot of wildlife at places like Faver Dikes State Park, Anastasia State Park. We also visited Guana/Tolomato/Matanzas National Estuarine Research Reserve. The walk to the Atlantic beach took us through a nature reserve in the dunes east of the island. These dunes support a healthy population of gopher tortoises. Their burrows make them a keystone species in this habitat, much like woodpeckers in a forest environment. A unique sub-species of the marsh rabbit (Sylvilagus palustris paludicola) lives there, characterized by darker reddish fur and smaller, more circular ears, as shown by the one pictured here. 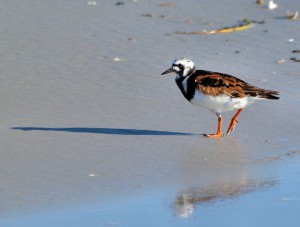 The Atlantic beach hosted a small group of regular species, including many Laughing Gulls, Royal and Forster’s Terns with the occasional Sandwich Tern mixed in, and an array of shorebirds including Willets, Sanderlings and Ruddy Turnstones that were still mostly in alternate plumage. Getting out just after dawn provided perfect soft light for taking pictures of these colorful shorebirds. At this time, we shared the beach with fewer people and their dogs, which also simplified the photography! We usually got first choice of whatever the ocean gods had chosen to bring forth overnight. Sometimes the waves brought in a dead fish or crab, and invariably there would be a turnstone or a Sanderling picking at it. 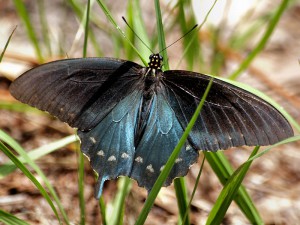 Faver-Dikes State Park was only about 8 miles from the house. This is an open woodland habitat of palmetto understory beneath a mixed hardwood and conifer forest on the shores of a marshy lake system. We saw our first Wood Storks and alligators and heard our first Carolina Wrens, Northern Cardinals and Great Crested Flycatchers here. A gorgeous Yellow-throated Warbler came in to pishing here, but not come close enough for photos. The diversity of insects and other arthropods here is staggering. There were dragonflies of every possible description, huge grasshoppers and quite a few butterflies and moths. We saw Zebra Heliconian butterflies here, but they were invariably just passing through. This Pipevine Swallowtail made us work before settling for long enough for a photograph. 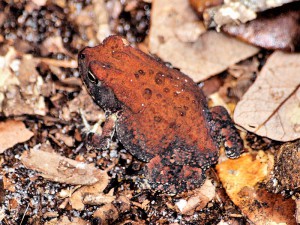 The trails at Guana River featured several marvelous boardwalks over open marsh land where the concentration and variety of dragonflies was incredible. Amphibians became the unexpected stars of the show here – there were toads and frogs everywhere. We saw mostly little 1-inch long Oak Toads (Bufo quercicus), but also some larger Southern Toads (Anaxyrus terrestris). This unusual color morph of Southern Toad was about a 2-inches long. These toads vary in color from mottled brown and tan through orange to almost rust red. Most of Florida is sandy. Accordingly, every toad we saw carried at least some grains of sand adhering to its back. 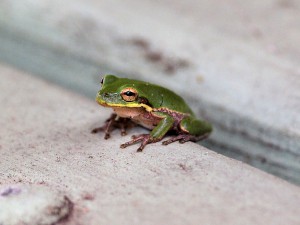 This American Green Tree Frog (Hyla cinerea) was sitting on a picnic table at the trail head. These little frogs are remarkably arboreal, as well as quite variable in color. This one had a notably yellowish gape and grayish underparts and feet. Other frogs of the same species are completely green underneath. We never saw the most interesting amphibian of the trip: the Eastern Narrow-mouthed Toad (Gastrophryne carolinensis). These bizarre little toads make a noise that sounds exactly like a tiny little sheep suffering from a cold – a sort of nasal bleat. They are simply hilarious! 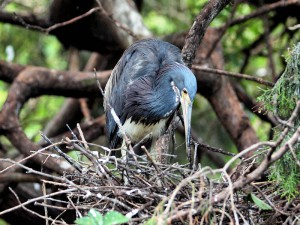 We visited two locations you might not think of for birding. One was the famous St. Augustine Alligator Farm. This business also acts like a zoo, featuring more than 30 species of crocodilians from around the world. Sadly, many alligators and crocodiles merit threatened or endangered status. They also conduct and sponsor lots of research on crocodilians. It is also a world-class tourist trap! One of the attractions is a boardwalk through a swamp that houses a simply amazing density of alligators, but also a very active heron, egret and spoonbill rookery.

Evidently, the gators keep terrestrial predators like raccoons and opossums out of the nests, so even with the occasional clumsy nestling becoming lunch for an alligator, they still have higher nesting success than they would elsewhere. It certainly provides marvelous photographic opportunities. We saw many active nests of Tricolored and Little Blue Herons along with Snowy and Cattle Egrets. There were many spoonbills and Wood Storks roosting there though we didn’t see any active nests. The Tricolored Herons seemed to specialize in nesting just off the walkway where they made great subjects. 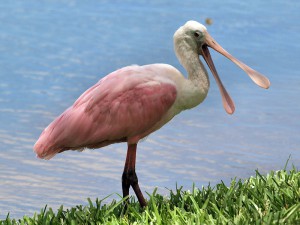 Oddly, some of the best bird photography came from an urban site: the pond of the St. Augustine Hospital. We discovered these birds by accident. They seemed somewhat less skittish of close approach here than at some of the more natural settings. This flooded urban pond held the only Anhingas and Mottled Ducks we found on our trip. It also housed a mixed flock of 20-30 Roseate Spoonbills and 15-20 White Ibises of varying ages. The spoonbills were pretty shy, not allowing very close approach, and they often launched and took off to the other side of the lake where there was no access. This one showed some signs of nervousness at my approach, so I had to freeze and wait for it to calm down again, but it was well worth the wait! 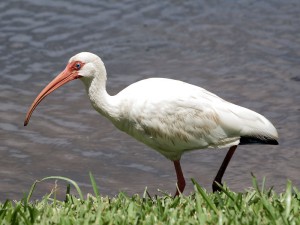 In contrast to the spoonbills, the White Ibis were pretty nonchalant. I often had one walk by between me and the one I was photographing, completely ignoring me! We saw quite a few different ages of sub-adult White Ibis here. Some were more gray than white. Whereas others were almost completely white with just traces of smudging on the crown, neck and wings. The adult pictured here shows a lovely blue iridescence in the black feathers of the folded wing. And that pale blue eye just grabs your attention! Overall, we had a great trip. The pair of soaring circling Swallow-tailed Kites we saw while driving to the airport were just icing on the cake.