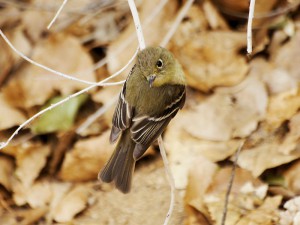 The preserve itself was simply alive with birds. We saw 5 species of warbler, 9 species of flycatcher and assorted passerines, like Lazuli Buntings and Black-headed Grosbeaks. One great thing about a morning like this is the chance to study difficult species like the (Empidonax) flycatchers. It’s always nice to have a chance to compare and contrast this difficult group in terms of their structural differences. We recorded five species of Empids that day, with Pacific-slope and Willow Flycatchers being the most common. A few  Hammond’s, Dusky and Gray Flycatchers put in an appearance as well. We also had great looks at Olive-sided Flycatchers and Western Wood-Pewees (photo) together. Watching these similar species side-by-side at close range made their structural differences much easier to see. Listening to them talk, particularly the two commonest Empid species, was also a pleasure. END_OF_DOCUMENT_TOKEN_TO_BE_REPLACED