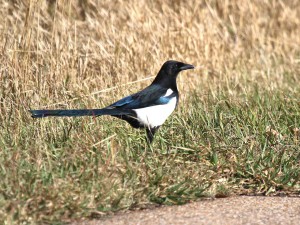 The magpies of North America are very visually distinctive from other birds and thus easy to identify. Although the Black-billed Magpie is very similar in appearance to the European Magpie, it is larger and genetically unique. DNA analysis places our two magpies as separate from the European Magpie. DNA distinctions caused the AOS to divide the American Magpies from the European Magpies. The same logic should apply to the Korean subspecies. The ancestral magpies, after dispersing across Eurasia and becoming isolated in Korea, then crossed over the Bering Land Bridge into the Americas at about 3 to 4 million years ago.Strictly speaking, using DNA comparisons, the AOS (American Ornithological Society) could potentially merge our two magpie species. END_OF_DOCUMENT_TOKEN_TO_BE_REPLACED 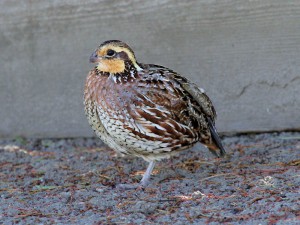 For Father’s Day weekend my daughter and I went up to Paso Robles, CA to visit family. It was not a trip where I got much time to go explore or bird watch. We did happen upon a few birds of interest while there. The first of these was a nice Northern Bobwhite. I had never seen a Bobwhite in Paso Robles before. Bobwhites not often seen in the Western US. Experts consider these to be domestic birds that have escaped. Well, escaped or not, she was very beautiful and certainly running around free. I was really surprised when I had trained my Nikon EDG II binoculars on her expecting to see a California Quail. END_OF_DOCUMENT_TOKEN_TO_BE_REPLACED