The James and Rosemary Nix Nature Center opened on St. Patrick’s Day in 2007. Oddly, it remains to this day, one of the better-kept secrets of Orange County open space. Conveniently located, this unit of the Laguna Canyon Wilderness Park is always well worth a visit. I have been stopping by periodically ever since it opened, often going for an hour or so before work during the week.

Although its official hours are 8:00 am to 4:00 pm, I often find it open earlier than that, which is really nice! I go mainly for the birds, of course, but anyone interested in hiking or relatively easy mountain bike trails will find something to their liking here. And in wet years, the wild flowers can be spectacular too. Just a piece of advice: if you plan to visit Nix Nature Center on a weekend, get there early. To keep the place from getting loved to death, parking is deliberately limited to four small lots. 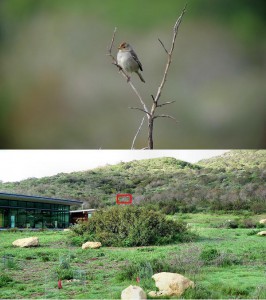 I was working on a review of the Leica D-LUX 4 digiscoping system. Happily, the Nix Nature Center is a great place for pictures. It was a gray overcast March morning when I stopped by. Phainopeplas were busy spreading mistletoe to every available sycamore branch. Small flocks of Zonotrichia sparrows (just Golden-crowned and White-crowned this year) sang and fed nervously in the open spaces around the parking lot.

This sub-adult White-crowned Sparrow teed up for me in a luxuriant laurel sumac. First I took a picture with just the camera. The sparrow is that white dot at the top of the bush. But with the Leica Apo-Televid 82 scope in line, the charms of this young bird become much more apparent. These photos were not cropped in any way, to make the magnification of the unit more apparent. Always check the sparrow flocks carefully in winter. I’ve seen Lincoln’s, Savannah, Chipping, and Brewer’s Sparrows mixed in with the White-crowns, and a Black-chinned Sparrow in early spring. Generally, they’re feeding right out in the open on the ground. 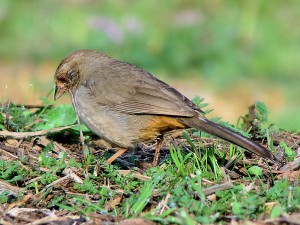 Generally, California Towhees feed near the parking lot, kicking the mulch and leaves with both feet as they root around. You can see the characteristic ‘pumpkin butt’ and hints of buff around the base of the heavy seed-eating bill. The canyons often echo with the loud “chink” calls of this common resident. A close cousin to the California Towhee and Spotted Towhees live here year-round. But I’m still searching for my first wintering Green-tailed Towhee there. 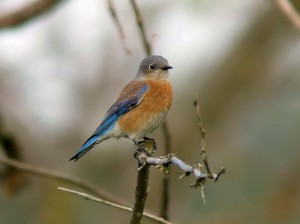 Willing to take advantage of a nest box hanging anywhere, Western Bluebirds usually feed from low perches. They even frequent the parking lots unless crowds of people have chased them into hiding. I found this female hunting from on a bare sycamore limb. As usual, she was too shy to permit close approach. But the extra “reach” of the digiscoping outfit easily brought her in close without the need to disturb her further.

Nix Nature Center sits on typical scrub land, with patches of oak-sycamore community in the wetter areas. However, a short walk from Nix brings you to other habitats. The network of trails links up with the other 6600 acres of the Laguna Coast Wilderness Park. These include Dilley Preserve, Willow, Sycamore and Laurel Canyons, and farther away, Crystal Cove State Park. Walking under Laguna Canyon Road takes you to Barbara’s Lake, the only naturally occurring lake in Orange County. There you always find Pied-billed Grebes and herons. Occasionally, Least Bitterns nested there in past years. So when you get a chance, check out this wonderful little park, and see what you can find.