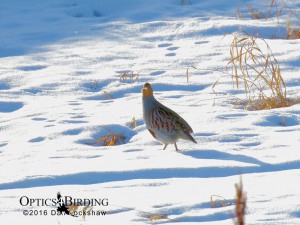 The Grey Partridges are a pleasure to find. There were several coveys in the area. These were new to me. They are fairly common this far north although I had never seen one. I have been singing 🎼♪ “and a partridge in a pear tree” ♫ every Christmas since I was a kid. It was a pleasure to actually have a picture in my mind of what they look like. Seeing them in action was a pleasure. They seemed quite similar to our quail being in groups running around on the ground (missed any in pear trees!). I was fortunate enough to have had the opportunity to bring a pair of Zeiss Victory SF 10×42 Binoculars with me for review. For now, all I will say is “WOW, The views through these binoculars are incredible”. END_OF_DOCUMENT_TOKEN_TO_BE_REPLACED