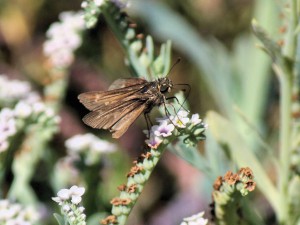 As it happens, one of the largest Wandering Skipper colonies is right here in Orange County at Upper Newport Bay. References said that they were present in the highest density in the vicinity of Big Canyon. So we started to look for them in late July. They weren’t easy to find! It wasn’t until August that we found a single individual, nectaring on the tiny purple flowers of European Seaheath (Frankenia pulverulenta). We went back several weeks later and found a fair few more of them, again feeding on the Seaheath. END_OF_DOCUMENT_TOKEN_TO_BE_REPLACED