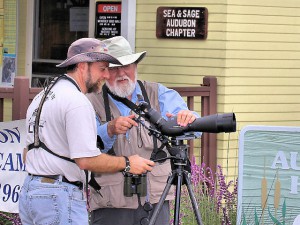 Digiscoping with Stephen Ingraham of Zeiss 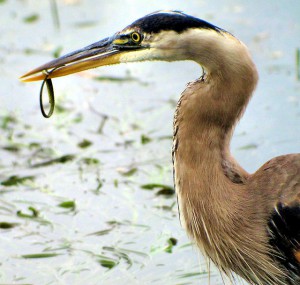 In preparation for the upcoming Zeiss digiscoping classes to be offered through Sea & Sage Audubon in October 2011, we were lucky to be visited by Zeiss’ own digiscoping expert, Stephen Ingraham. Stephen taught us how to use the adaptor and optimize the camera and scope for photography. We took Stephen to the mouth of the Santa Ana River on a gray and overcast Sunday morning in June. Stephen reviewed with us how to best align the camera and scope and then we were off.

At Talbert Marsh at relatively low tide, we found strangely little to look at initially. A few Western Gulls lounged on the beach and some Killdeers screamed warnings to no one in particular. A somewhat ratty Double-crested Cormorant looked neither crested nor double… Then a Great Blue Heron showed up and started fishing in a mat of eel grass within 30 feet of us. Rather appropriately, the heron captured a green eel. Even in that grayish light, the Zeiss Diascope 85 spotting scope equipped with a Diascope Digital Camera Adaptor II and a Canon PowerShot S95 camera, picked up frame-filling detail as the heron subdued and swallowed its meal. 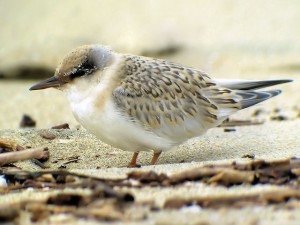 Our next stop was at the river mouth, near the California Least Tern and Snowy Plover breeding enclosure. Most of the adult Least Terns were way out on the beach, or out to sea fishing. However, we found this juvenile bird well on its way way to independence. Mom and Dad still fed him though. He luckily evaded the coyotes and Peregrine Falcons thus far. They would happily  make lunch of him! You can see how the camera picked up subtle details in the shading of his feathers. 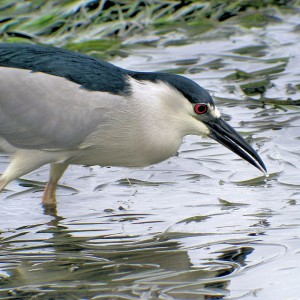 Returning to the car, we found this adult Black-crowned Night-Heron fishing right next to the path. With one of the broadest distributions of all birds, Black-crowned Night-Heron is hardly rare. But what a handsome one! This one still had one pale filoplume dangling from its crown and looked quite snazzy. Stephen says that when the gods of bird photography throw a suitable subject your way, never turn it down. So we worked at filling our memory cards a bit more. Two different users tried out this digiscoping rig for the first time. And both got decent quality shots even under less-than-ideal conditions.