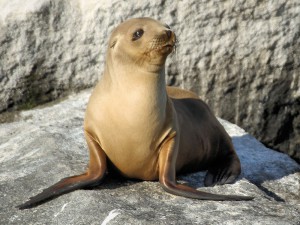 I took the Sea & Sage Audubon spring pelagic trip out of Dana Point on 03-MAY-14. It was a glorious eight hours of birding on a glassy calm Pacific Ocean with cool temperatures and almost no breeze. The trip started with us cruising past one of Orange County’s only nesting pairs of Black Oystercatchers on the breakwater. This young California Sea Lion pup loafing on the rocks was too adorable to ignore. Once out to sea, pelicans, gulls and terns soon began congregating behind the boat. Popcorn works every time! This pelagic trip featured low numbers, but a good variety of birds. 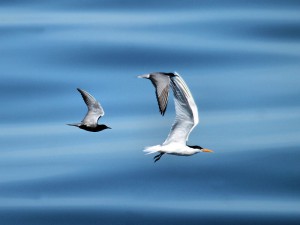 We had a good variety of terns, including Caspian, Elegant, Forster’s, Common, Least and Black Terns. These terns lifted up off a floating kelp raft. The gulls were fairly mundane, including California, Western, Heermann’s, and Bonaparte’s, with one exception. A group of eight Sabine’s Gulls encountered near Catalina Island gave provided a thrill. The group included three fully hooded adults. Now that’s a snazzy bird! Any day you see a Sabine’s Gull in Orange County is a good day of birding by definition! Hence, this was a very good day. 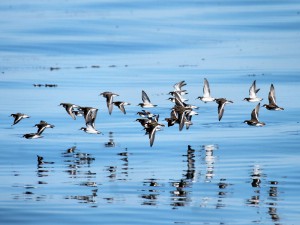 We did well for true seabirds as well, with a single Black-vented Shearwater, three languidly flying Pink-footed Shearwaters and dozens of Sooty Shearwaters, most of which were in such ragged molt it was a wonder they could get airborne. Unfortunately, we saw only two distant Black Storm-Petrels all day. We observed all three of the expected loon species (Common, Pacific and Red-throated) multiple times. Scripp’s Murrelets, a dozen or so Cassin’s Auklets, and one sub-adult Rhinoceros Auklet represented the Alcidae. Several groups of Scripp’s Murrelets included flightless young ones, though they still dive like pros! We kept running across large rafts of phalaropes, more than 90% of which were Red-necked Phalaropes like these shown here. There were isolated Red Phalaropes feeding on kelp rafts, and occasionally mixed in with the Red-necked. 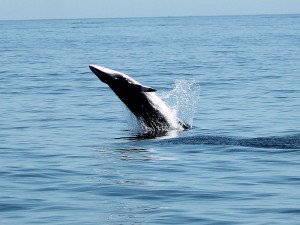 Marine mammals, rather than birds, provided the best show of the day In addition to the California Sea Lions, we also saw Stellar’s Sea Lions, Northern Elephant Seals, Bottle-nosed Dolphins and three different Minke Whales. The first pair of Minke Whales were quite friendly, circling the boat and obligingly surfacing repeatedly for photos. But on the way back to the harbor, we encountered one that got playful with us, dashing under the boat and then fully breaching right up close. Though lots of people missed the original jump, that Minke proceeded to breach 4 more times! What a glorious way to end a trip. I used a Canon EOS Rebel T3 camera and a 100-400 mm zoom lens for these shots.