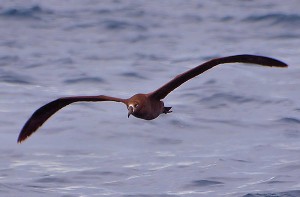 Recently, Optics4Birding participated as a vender in the annual San Diego Bird Festival. After three days of talking with people about optics, it felt great to revert to merely being a birder. At the gracious invitation of Swarovski, I joined the Islas Coronados Pelagic Trip. I have been on a few of these festival pelagics before, but this was my first in some time. Over the years, the trip underwent some important changes. While it was always good, I am happy to report it is even better now!

Years ago, it was just a 4-hour jaunt to the Coronado Islands of Mexico with the major target being Brown Booby, which occasionally roosted on the cliffs of Middle Island. On a good day, you maybe saw two of them. Recently, the festival switched operators, and SoCal Birding now runs the boats. In addition to the Coronado Islands trip, there is an 8-hour venture to the 9-Mile Bank. This vast underwater seamount features deeper, colder, nutrient-rich waters that lure in a host of pelagic life forms to this point just 14 miles offshore. It is worth noting that the leadership on these trips is truly world class. Some of them literally wrote the book; others just know enough that they could have! Kudos also goes to Swarovski Optik, who generously subsidizes the trip. That holds down the cost so participants can get a great trip at an amazing price.

As the bus left Marina Village where they hold the festival, rain streaked the windows. But excitement kept the mood upbeat as we boarded the boat during a dry spell. As usual, Swarovski, was loaning binoculars to anyone bold enough to take them. I brought a pair of 10×42 EL Swarovision binoculars from Optics4Birding so on my way onto the boat, I clarified with them the important difference between loaned (theirs) and “stolen” (ours!). Conventional wisdom says you don’t take 10x bins onto a boat since they’re harder to hold steady. And frankly there are enough impediments to steadiness on a pelagic trip. You wouldn’t know it by me! The waters were calm, with the waves seldom exceeding 5 feet with only minimal wind. I had cracking views all day, and the extra magnification was very useful on the more distant birds and mammals. 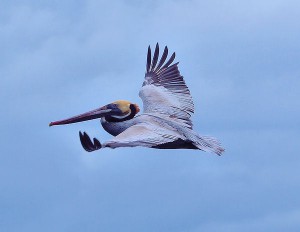 On our way out of the harbor, we saw all the expected species, starting with Double-crested and Brandt’s Cormorants. A number of dark-bellied Brant swam by, and a Herring Gull mixed in with the common Western and Heermann’s Gulls. A wintering Long-tailed Duck among the Surf Scoters and a young Glaucous-winged Gull added spice to the mix. A frightful crush of cormorants, herons, egrets and pelicans sat on the bait barge. But several Black Turnstones lent the place a bit more dignity.

Common, Pacific and Red-throated Loons were all present in the channel as we headed out to the 9-Mile Bank. A Parasitic Jaeger was chasing gulls and terns at the tip of the headland. Shortly thereafter, the first Rhinoceros Auklets appeared, looking like stubby shoeboxes with wings. Rhinos are probably closer to puffins than other auklets, and this was evident in those that allowed us closer approach. Soon Cassin’s Auklets, barely 1/5 the size of the Rhinos, were zinging away at our approach. They looked like little gray tennis balls in flight. Our last alcid of the day was Xantus’ Murrelet, which almost invariably appeared in pairs. These were birds of the locally-breeding scrippsi sub-species. They show prominent white eye crescents, but lack the white cheek patch of the northerly-breeding hypoleucos sub-species. 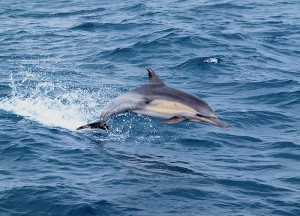 No less exciting than the birds were the mammals. We saw several pods of Risso’s Dolphins with their characteristic scarring of the upper body and their large dorsal fins. Risso’s Dolphins feed primarily on squid, who take vigorous exception to the process. These dolphins also use their teeth on each other to communicate. Thus, these dolphins often look like Jackson Pollack art. The trip also yielded some close encounters with multiple Finback Whales. California Sea Lions were everywhere, and on the rocks of the Coronados, we saw Harbor and Southern Elephant Seals. The last two mammals were Pacific White-sided Dolphins and Short-beaked Common Dolphins. Experts recently separated them from the Long-beaked species. Evidently, the splitters hold sway among the mammologists too!

We also saw scattered tubenoses, beginning with another local breeder, Black-vented Shearwater. Their small size and rapid wingbeats made them fairly easy to distinguish from the larger shearwaters we would see. By contrast, the much larger Pink-footed Shearwaters have a more languid wingbeat and frequently glide for long distances. Intermediate between them was a single Sooty Shearwater, unique among these three species in having an all-dark belly. Their silvery underwing linings (rather than clearly white) are a distinguishing field mark . Much discussion raged around a putative Short-tailed Shearwater. But the best was still to come. 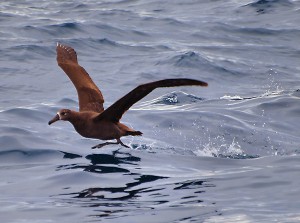 First, a Black-footed Albatross was found and lured to the crowd of gulls among the chum at the back. A constant dribble of cod liver oil kept it following us for quite some time. So everyone got great looks at this spectacular ocean wanderer. Then a Northern Fulmar brought everyone to the railing. This bird showed its classic blunt, bull-headed look, emphasized by the steep forehead. Right on its tail came the unexpected gem of the trip: a gorgeous Laysan Albatross. This bird nearly caused participants to capsize the boat when it cut sharply across the bow, and everyone raced to that side. Okay, not really, but the pandemonium was impressive! 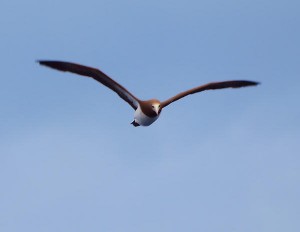 When we got closer to the Coronados, we began seeing Brown Boobies in flight. Soon we were at the nesting/roosting cliffs at Middle Island. We saw them in great numbers, logging between 25 and 30 individuals. Our trip around the South Island netted us a Wandering Tattler or two, a few Black Oystercatchers, and then a very interesting American x Black Oystercatcher hybrid. We see such birds fairly frequently in southern California, but this one was particularly pretty. Eventually, we headed north to return to San Diego. A Black-footed albatross taunted us on the way, coming in behind the boat and hanging with us for quite a while before veering away west and out of sight within a half mile of the U.S. border. But then it, or another like it, returned shortly after we crossed the border, followed by a second individual. 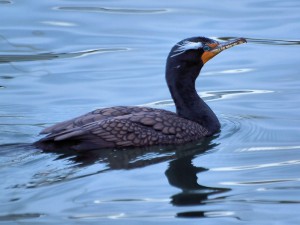 Not to be outdone, a Brown Booby showed up in flight fairly close to the channel mouth. Immediately after that, a Parasitic Jaeger was seen hounding an Elegant Tern. While we were docking, this fantastic Double-crested Cormorant showed up in all his nuptial splendor. You seldom get to see them looking this fine, a fitting end to a great trip!