Recently a Taiga Bean Goose joined the winter geese at Salton Sea National Wildlife Refuge. Naturally, this sparked discussion about speciation and vagrancy of geese. Along with virtually all other southern California birders, we went out to see the bird. As rarity chases go, this one was somewhat underwhelming. A 180-mile drive brought us to Vendel Road at about 6:20 a.m. where a group of birders already huddled. Surprisinglly, the bird was in view as it quietly fed with the three Greater White-fronted Geese that form its posse. It was roosting over 200 yards away in a field full of deep furrows. Hence, we seldom saw more than its head and neck. Occasionally, it walked up on top of a furrow, and showed off the bright white feather edging in its back and wings. But that was about it. 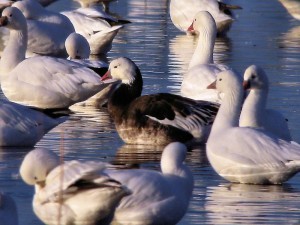 Blue Ross’s Goose among winter geese at the Salton Sea

Winter Geese at the Salton Sea

Where we viewed the Bean Goose, a mixed flock of Snow and Ross’s Geese sat in the pond behind us. The flock included one obvious blue-form Ross’s Goose. Bob Miller, a local bird expert, noted that, globally speaking, a blue-morph Ross’s Goose is rarer than a Bean Goose. Sure. Okay. Wait a minute… What?!

Factually, the world population of Taiga Bean Geese is roughly 5000 birds. According to The Auk, blue-morph Ross’s Geese constitute about 0.02 % of the total population, which at about 1,000,000 birds means there are maybe 2000 of them. Apparently, a blue-morph Ross’s Goose is actually rarer than a Taiga Bean Goose. Then again, in recent years, blue-morph Ross’s Geese were annual at the Salton Sea in winter. Whereas Taiga Bean Goose is usually a bit less reliable there, a reminder that in listing (and not just for real estate agents) it’s location, location, location! Lastly, there is a hunting season out there and it’s on now, so if you’ve a mind to, you might want to go see this goose sooner rather than later since it could end up cooked!