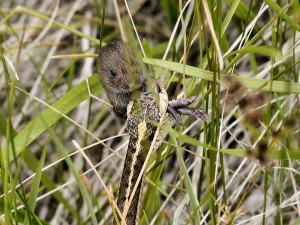 After a lunchtime stop at Mono Lake Park, we took a walk down the boardwalk to see what birds we might find along the north shore of Mono Lake. We found large numbers of California Gulls and Eared Grebes. Both species breed on islands in the lake. Ospreys were nesting on the tops of tufa columns, and the summer-resident Violet-Green Swallows zipping through the air.

On our way back to the cars, I saw people standing on the edge of the boardwalk. They were leaning over, looking at something. As I approached, I could hear a high-pitched cry. I looked down and saw this Mountain Garter Snake (Thamnophis elegans elegans). It had a California Vole (Microtus californicus) in its mouth. The vole seemed resigned to its fate, as other than repeated cries, it made no visible effort to escape. Likewise, the garter snake did not seem in a rush to swallow the vole. I managed a few photos, but we had other birding locations to visit that day.

Mountain Garter Snake has a black back with a yellow/orange dorsal stripe that ends at the base of the skull, white upper labials (lip scales), and a white belly. They range from 14 to 43 inches long, and this one was somewhere around 24 inches. The California Vole is distinguished from co-resident Sagebrush Vole by its dark brown, as opposed to light gray-brown, color and its larger head.