We found some early migrant Dark-eyed Juncos grazing like little cows on the lawn at Fort Rosecrans National Cemetery. The birds were bold, approaching to within 10 feet of us, as they were sheltered from the wind behind a low cement wall. These normally shy little birds were within 15 feet of us. That let us take these photos with a Canon 40D DSLR and a 75-300 mm zoom lens. We took the photos, because a male Oregon Junco and a male Pink-sided Junco provided an interesting juxtaposition here. 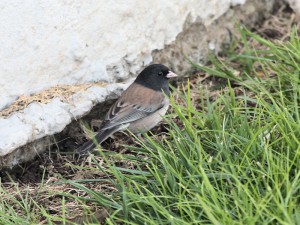 Let’s back up a bit. For starters, Dark-eyed Junco represents a complex of six different  sub-species. Field guides designate these as: Slate-colored, Oregon, Pink-sided, Gray-headed, Red-backed and White-winged. For our purposes here, it’s worth noting that the latter two sub-species generally don’t occur in Southern California. The first four occur here regularly. Of those, the Oregon form is the most common, and it comprises by far the largest portion of our juncos.

Adult Dark-eyed Junco males like our bird have a dark gray or black hood, a brown back and pale pink or rusty flanks. They top this off with a lovely little sharp pink bill and a whitish belly. Ironically, the dark eye, for which the species complex is named, is barely visible in Oregon Juncos since it is essentially the same color as the hood. A good look at our pictured bird shows that it fits this description pretty well. 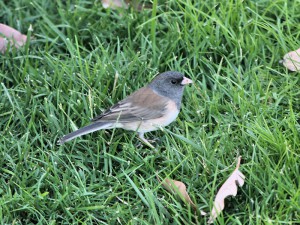 Contrast that with the other bird. This bird has the same pink bill, but the hood is a light bluish gray. This creates a visible contrast with the blackish area between the bill and the eye (the lore). The back is a pale, dull brown, and a slight wash of the same color is visible in the nape. This bird also shows light pinkish flanks and a paler belly region. In fact, separation of an adult male Oregon from an adult male Pink-sided Junco is not difficult.

How much does all this matter? Experts originally classified the junco forms as full species, distinct from one another. But subsequent genetic analysis revealed that their mitochondrial DNA was too similar for full species designation. The juncos themselves don’t seem to care all that much. Where their ranges overlap, juncos do interbreed. For whatever reasons, when these sub-species interbreed, the result is always one of the color forms or phenotypes; interbreeding doesn’t produce visible intergrades. So in the eyes of juncos, it’s all the same. That means that junco forms are just another one of those games that birders play.